Polish files found in Russian archives. “By law, these files should be in Poland,” says Cezary Gmyz. 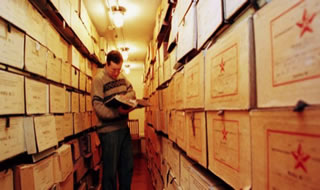 As reported by Gazeta Wyborcza, German historians have discovered pre-war documentation belonging to the Polish intelligence services (known as "Dwójka", eng. "Two"), and Polish police. For years, Poland has been trying to recover the lost archives.

Thus far however, Moscow has consistently refused to return the Polish property.
Several dozens of files belonging to the Polish intelligence services and the police have been discovered by German researchers in Moscow. The documentation that was preserved during the war was seized by the Red Army, and the Russian secret police, the NKVD, in 1945, and has since been kept in Moscow under strict control. According to international regulations, Russia is obligated to return the Polish secret service files, but the Kremlin has consistently refused to do so. The Polish historians have been learning about the content of the Polish archives in Moscow through their German colleagues, who scan and publish the documents on the Internet.

The latest of the discovered Polish documents include, inter alia, a map of connections between Moscow and other European cities as well as a graph of a cell within a unit of the German communist party.

The matter was commented on by Cezary Gmyz in “Chłodnym okiem." Gmyz said that while the content of the discovered archives is not entirely unknown, the work of the German historians should nonetheless be appreciated, as they had published these materials online in high resolution.

Gmyz criticized the Polish Ministry of Foreign Affairs, which for year has been unsuccessfully appealing to Russia for the return of the archives. This in itself, is noting new, taking under consideration the Russians’ penchant for withholding property of other nations; case-in-point, the wreckage of the Polish government Tupolev TU-154M that crashed in Smolensk, Russia on April 10, 2010, and its black boxes. “This goes to show that Poland is very lenient towards Russia, because Polish historians have been aware of the existence of countless Polish documents that are being currently kept in Russia. By law, this documentation should be in Poland, as it originated here. Yet, the negotiations of the Ministry of Foreign Affairs have been ineffective,” he concluded.

Gmyz claims that even if Moscow continues to refuse to return these documents to Poland, Polish representatives should at least obtain scanned copies. “This documentation does not only include intelligence files, but also files relative to the interwar period. These files are invaluable to Polish history,” stated Gmyz.