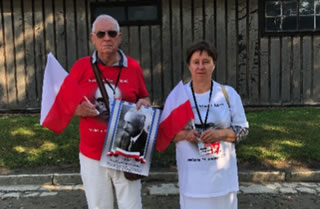 Nearly a quarter of Poles declare that their family members wer victims of Auschwitz or other German Nazi concentration camps - this is the opinion of 21 percent of respondents. Including German Nazi prisoner-of-war camps, 27 percent of respondents declare that their family members were victims - according to the CBOS study published on January 24, 2020.

According to the CBOS report entitled "Auschwitz-Birkenau in the collective memory - 75 years after the liberation," "almost one tenth of respondents (9 percent) - as many as five years ago - declares that one of their relatives was a prisoner of Auschwitz, and four out of a hundred (4 percent) lost a family member there."

About one-seventh of respondents (14 percent) have or had among their close relatives imprisoned in another German concentration and death camp, and a similar percentage (13 percent) - in some German prisoner-of-war camp, according to the report.

The CBOS study shows that over the past 25 years the number of people remembering that their loved ones were Auschwitz prisoners decreased negligibly, while noticeably fewer people - even if compared with the measurement five years ago – cultivate memory of their loved ones held in other Nazi Germany concentration camps."

According to CBOS, the memory about relatives held and murdered in German concentration camps is preserved most often by the elders, especially the oldest respondents (75 years and older) and residents of the largest cities."

In turn, the Museum of the Auschwitz-Birkenau Camp in Oświęcim "was visited by more than half of the respondents (55 percent), i.e. the same number as five years ago," according to the CBOS survey. Most often those were the people for whom this place is associated with family history (someone close to them was a prisoner or died in Auschwitz-Birkenau) than others who did not have such family experiences (72 percent against 53 percent).

Less often museum visits are declared by the youngest respondents (18-24 years - 44 percent), and the least educated (33 percent), who have the lowest income per person in the household (below 900 PLN - 40 percent).

It was emphasized that "almost all respondents claim that the memory of Auschwitz is something important to them, including almost six out of ten (59 percent) who attach great importance to it." The CBOS study shows that in five years the importance of this memory has increased slightly.

"Given the twenty-five-year perspective, it can be seen that more and more often this place is associated primarily with the extermination of Jews," it is reported.

This study was conducted by means of face-to-face computer-assisted interviews (CAPI) from January 9 to January 16 on a representative sample of 1016 adults Polish residents.