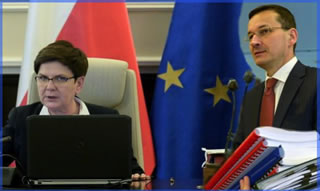 The 2016 budget’s income came up to 314,683.570 PLN and exceeded the anticipated income by 875,044 PLN that is by 3 percent. This increase was achieved primarily through higher revenues from the excise duty, higher income taxes, as well as a higher earnings contribution from the National Bank of Poland.

According to CIR, the lower spending resulted from an incomplete allocation of specific provisions, means for subsidies and grants, and current expenditures.

An average quarterly increase of the GDP in 2016 reached 0.7 percent. The GDP’s dynamics was variable over the year. The results from 2016’s fourth quarter indicated a noticeable improvement of the dynamics of economic activity towards the end of the year.

Throughout 2016, the GDP increased by 2.7 percent, which is lower than the forecast for the 2016 budget. The national demand remained the primary reason for the increase, although its dynamics was lower than a year before, due to the decrease in investments. The net export contribution to the increase of GDP was slightly positive (0.3 percentage point). The GDP came to 1,851.2 billion PLN and was higher than in 2015 by 2.9 percent.

Throughout most of 2016, goods and service prices remained lower than a year before. The yearly deflation concluded in November, and on average, the consumption prices in 2016 were 0.6 percent lower when compared to 2015. They were also significantly than their estimation, which was predicted to be 1.7 percent. The consumer pricing was mainly a reflection of a worldwide situation within the energy and agricultural markets.

As reported by CIR, in 2016, the total nominal surplus in goods and service trade reached the record high of 3.7 percent in relation to the GDP. As a result, the total deficit of current turnover of balance of payments decreased to 0.3 percent of GDP, as opposed to 0.6 percent it reached a year before. This result has been the best since mid-90s. The data exceeded the forecast of the 2016 budget, which was minus 1.5 percent of GDP.