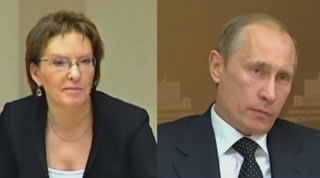 Ewa Kopacz who served as Minister of Health at the time of the Smolensk disaster appeared at the Warsaw Prosecution Office, where she was interrogated as a witness in the investigation into, among others, failure to conduct autopsies on the Smolensk crash victims.

“I will meet with the prosecutors as summoned. In April 2010, I was appointed to represent the Polish government as a support person for the families of the Smolensk crash victims, and that was my sole responsibility in Moscow,” the former Prime Minister and former Minister of Health wrote in a Facebook post before she left for the Prosecutor’s Office.

“After the Smolensk crash, I went to Moscow because I wanted to support and look after the families of the victims at such difficult time. I felt it was my duty and obligation, and that it was a necessary thing to do,” emphasized Kopacz, adding, “I was appointed to represent the government as a support person for the families of the victims, and that was my sole responsibility.”

She stressed that she was accompanied by Polish medical staff, which could perform general check-ups such as measuring blood pressure or glucose level. “We administered necessary medication to those who needed it, and performed ECG tests. The autopsies, exhumations and other procedures were ordered by prosecutors. That has never been my role,” she emphasized.

“I considered many times whether it was a good decision to go to Moscow. At the time, I certainly felt I needed to help. Each time I think about the first days that followed the crash, I know that I did the right thing,” the former Prime Minister said.

The former Minister of Health confessed that the tragedy has left “massive loss and void” in her life. “Void, left in my life after my friends and acquaintances,” she wrote.

The Prosecution confirmed information circulated by Fakt, that the coffin of Gen. Włodzimierz Potasiński, the former Commander of Special Forces, contained remains of three other victims. The Prosecution also confirmed that the former Operations Commander of the Armed Forces, Gen. Bronisław Kwiatkowski’s coffin also contained remains of seven other victims. At the beginning of the year, it was confirmed that two bodies, that of the former President of Polish Olympic Committee, Piotr Nurowski, and that of the former minister in the President’s Office, Mariusz Handzlik, were swapped.

Doubts regarding the identity of the victims were raised in 2011, when the families received the medical documentation prepared by the Russians. These concerns led to nine exhumations conducted between 2011 and 2012, upon which it was confirmed that six victims were buried in wrong graves. Experts who carried out the exhumations concluded that major errors were found in ninety percent of medical documentation provided by the Russians.