Shocking! As early as the 1970s, Germans already falsified history
to portray Poles as anti-Semites 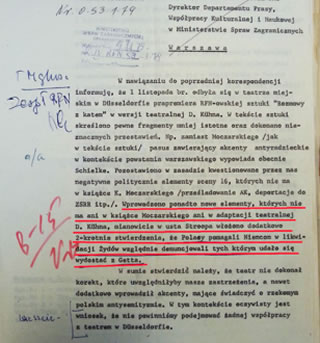 On Twitter Sławomir Sieradzki presented two documents showing how the history of Poland was falsified in East Germany known as GDR. On the basis of one of such documents we can see that to lessen their guilt the Germans as early as the 1970s began to portray the Poles as anti-Semites.

The first document is a note from the Polish Embassy in East Germany from 1979 to the director of the press, cultural and scientific cooperation department at the Polish Ministry of Foreign Affairs Stefan Staniszewski. The note shows how the Germans transformed the theatrical interpretation of Kazimierz Moczarski's book "Conversations with an executioner" so that the Poles could be presented in that play as anti-Semites.

In addition to manipulations with words, new statements were inserted to the play, statements that were not in original Moczarski's book nor in the theater adaptation by D. Kuhn. A character from the book named Stroop twice repeats an inserted anti-Polish statement that Poles helped Germans to liquidate Jews and denounced those who managed to escape from the Ghetto,

“All in all, it should be stated that the theater did not make adjustments that would take into account our objections. To the contrary, even introduced new fragments that suggest the Polish anti-Semitism. In this context, it is clear that we should not undertake any cooperation with the theater in Dusseldorf,” the Polish diplomat concludes.

In the other note by Sieradzki that comes from 1972, the Polish diplomat reports that in one of the encyclopedias published in East Germany - the GDR, the Polish Home Army was presented in a scandalous manner. Interestingly, the German description of the Home Army outraged even the Polish communist official, by definition not a friend of the Home Army.

See how the Red Germans defined the "enemy" i.e. the Home Army: “Military organization formed in occupied Poland in February 1942 by the bourgeois government of emigration. (...) As a result of the growing anti-Soviet, anti-democratic attitude of the leadership, the guerrilla struggle was paralyzed. (...) From the motives of the struggle for political power, on August 1, 1944, the Warsaw Uprising was called. On January 19, 1945, the self-dissolution of the AK took place. Individual groups in the form of bands led to a fight against popular rule until 1947. Even the Polish communist was amazed, we read under the term "Home Army" in an encyclopedia of East Germany.

The authors of this description of the Home Army in the GDR encyclopedia disregarded the main purpose of establishing the Home Army – to fight for independence of Poland. "This is an interesting contribution to the ongoing discussion on how to improve textbooks in the German Federal Republic,” commented on this encyclopedia entry the Polish diplomat in his 1972 note. 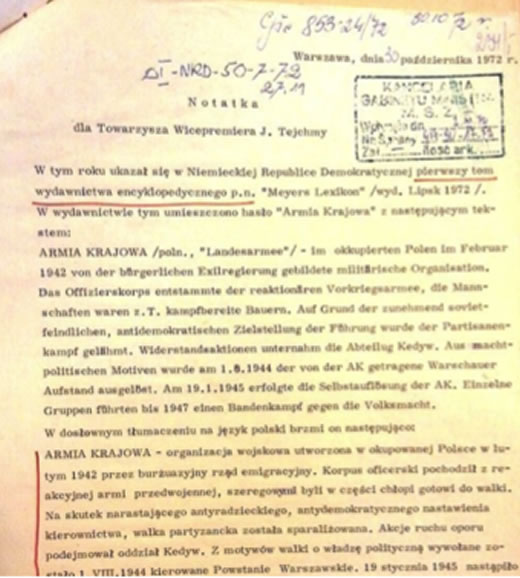