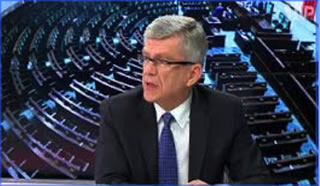 “Repeatedly Mr. Donald Tusk spoke in words very critical of the Polish government, especially on December 16, he spoke very critically about what happened, but addressed by his criticism towards the government,” said the Speaker of the Senate at a press conference.

“It was a very bad assessment of what was happening in Poland, because in Poland in no way the principles of democracy have been violated or disrupted, said Marshal Karczewski.

At the same time Marshal expressed confidence that Saryusz-Wolski, who has been a member of the Civic Platform, is a good candidate for the head of the European Council. He is well prepared and "so far respected by all, including the PiS politicians."

“We were able to rise above political divisions, beyond the political differences, and designate the candidate who was in another political group in the European Parliament,” emphasized Karczewski.

Saryusz-Wolski is a man with great experience in working in the EU and working on the process of integrating Poland into the European structures. “He is respected by all political options. Maybe at the moment temporarily by the Civic Platform less,” he added.

The end of May marks the first 2.5-year term of Tusk as the head of the European Council. At the EU summit on March 9-10, 2017 European leaders have to decide whether Tusk will serve as Chairman of the Council for another term.