US and Poland to Expand Cooperation. 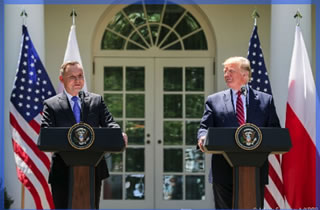 President of Poland Andrzej Duda met with President of the United Sates Donald Trump on June 24, 2020 at the White House in Washington. The purpose of the meeting was to expand economic and security cooperation based on shared values of liberty and rule of law.

According to the joint statement, both countries plan to expand their centuries-old cooperation in trade, security, energy, defense, and health based on shared values of “democracy, the rule of law, individual liberties and freedoms, and free, fair, and reciprocal trade.” Both leaders stressed the need to “invest in defense and deterrence capabilities, especially toward the security for NATO’s Eastern Flank, which includes Poland.” They both affirmed their commitment to “fair burden-sharing,” which means that each ally should spend 2 percent of its GDP on defense, as agreed by all NATO members. Only eight allies and the United States comply with this requirement and Poland is among them, Trump told reporters.

President Trump welcomed Poland’s long-term contracts with U.S. companies for the purchase of liquefied natural gas (LNG) and mentioned establishing a partnership for building nuclear power plants in Poland using American nuclear technology. President Duda pointed out that Poland plans to increase the capacity of its existing LNG regasification terminal and build a new one. This expansion will assure that Poland be in the position to deliver gas supplies to countries in Central Europe providing them with an alternative to Russian gas.

President Trump also congratulated Poland for its leadership in the Three Seas Initiative, which is designed to “provide a reliable source of energy for Eastern Europe … [so] it will be free from the threat of foreign extortion.” The initiative also focuses on expanding and modernizing the infrastructure between nations in Central and Eastern Europe, especially along the North-South axis, as well as digital interconnectivity in the region.

“Free, fair, and reciprocal trade has enabled our nations and the world to grow prosperous, has powered innovation and development, and has created millions of jobs. We commit to jointly fight against abusive trade practices. We will also continue to promote increased trade and investment, especially in modern technologies,” the joint statement reads.

The American investments in Poland were also discussed. In particular, it was announced that Google will invest up to $2 billion in a data center in Poland to deal with cloud services, “Region Google Cloud in Warsaw is the biggest investment in the infrastructure of this type in Poland,” Magdalena Dziewguc, Google Cloud’s business development director in Poland and Central and Eastern Europe, told the reporters. “We are getting ready for it to be operational at the beginning of 2021,” she added.

Shortly before Duda-Trump meeting, Microsoft announced a $1-billion-dollar investment in Poland to fund a new data center with cloud services to businesses and government institutions in Poland. Microsoft has a nearly 30-year track record of successful cooperation with more than 6,000 Polish local partners, and this investment will create upskilling and learning opportunities for about 150,000 Polish employees, partners, and students, the tech giant said in a statement. Prime Minister Mateusz Morawiecki said that Poland has ambitions to transform “into a technological hub for the region of Central and Eastern Europe.”

“The American and Polish people have been true friends and trusted partners for almost 250 years. We’re forever united by our shared belief in family, faith, law, liberty, democracy, and justice. As the old polish motto goes, we will stand together in the name of God for our freedom and for yours,” President Trump said.

“Both countries will join their efforts to combat disinformation, especially distortion of historical truths relating to World War II,” the joint statement reads.

During his visit to the US, President Andrzej Duda paid tribute to the Polish-American hero who fought in the American Revolution, laying a wreath at the monument of Thaddeus Kosciuszko in Washington, D.C.

The Kosciuszko Statue in Washington D.C. was vandalized by riots that erupted in the United States in May 2020, after the death of George Floyd in police custody. The Polish Ambassador to the U.S. Piotr Wilczek reacted to this vandalism by stating: “I am disgusted and appalled by the acts of vandalism committed against the statue of Thaddeus Kosciuszko in D.C., a hero who fought for the independence of both the U.S. and Poland.” The monument was restored by the United States. President Duda thanked President Trump for the restoration.

Kosciuszko was a Polish military engineer and military leader who joined America’s fight for independence against the British in the 18th century. He was named a chief engineer of West Point, New York. General George Washington appointed him as a Brigadier General and awarded him with the Cincinnati Order Medal for his achievements. Kosciuszko bequeathed all of his American assets to buy freedom for enslaved Africans, educate them, and provide them with land.