Yad Vashem: Jews from the NKVD are protected 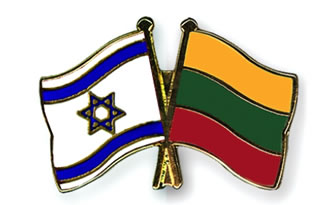 A conference on the destruction of Lithuanian Jews was planned in Jerusalem. Its organizer, Yad Vashem, has announced that they cancelled the invitation to this conference to the Minister of Culture of the Republic of Lithuania Arunas Gelunas and to the Lithuenian Ambassador of Darius Degatis.

This is the outcome of the article that was published in "Haarec" by an Israeli journalist Jossi Melman. He described the inquiries conducted by the Public Prosecutor's Office of Lithuania against the survivor of the Holocaust, who served in the Soviet army and NKVD (communist secret police). These people, who today live in Israel, are suspected of war crimes and other crimes.

One of the suspects is the former head of the Yad Vashem Yitzhak Arad, who after his escape from the ghetto in Kowno, joined the Soviets and later served as officer of the Soviet secret police NKVD. Also two other pro-Soviet guerrillas Rachel Magnolis and Josef Melamed served in Soviet apparatus of oppression.

The case of Melamed raises great emotions. Lithuania Authorities requested legal assistance from Israel and the local police recently visited the 86-year-old Melamed and interviewed him.

Melamed is a well-known Israeli lawyer who also serves as President of the Association of Jews from Lithuania. During the war, he was in the pro-Soviet Communist guerrilas, and after the war he joined the SOVIET NKVD, summoned nine Lithuanians who subsequently were murdered. Melamed claims that those people were "German collaborators" who murdered Jews. One of them, a former officer of the Lithuanian army Juazas Luks was accused of murdering Rabbi Zalman Osowski.

The Soviet Communists called all of their victims as "collaborators." The issue really is about the murder of Lithuanian elites. “I verified in the list of the officers of Lithuenian army that "Juazas Luks" never existed, stated Rytas Narvydas, the head of the department of special investigations, genocide, and war resistance research of Lithuania.

According to Jossi Melman, Lithuanian investigations are "outrageous," and Lithuania is trying to "write the history again." During the war Lithuanians eagerly killed their Jews, and now suddenly it turns out that the Jews were bad people. According to Jossi Melman, real motivation can be revenge. Years ago, Melamed sent to Vilnius a list of three thousand collaborators, who participated in the murdering of Jews. In response the Lithuanians accused Melamed of war crimes.

Narvydas do not agree with this argumentation. It is true that many Lithuanians took part in killing Jews, but this does not excuse those Jews, who took part in the killing of Lithuanians. If you commit a crime, you have to pay for it. Whether you're a Lithuanian, Polish or Jewish, " he said.

Degatis in a letter to the press clarified that Melamed had not been accused of anything and that prosecutors had merely wished to verify the documents on which he based his accusations against nine people accused of genocide as leaders of the post-war Lithuanian resistance against the Soviets who had been "falsely accused of serious crimes."