Selling the truth for politics and money
SIX Important Questions about Auschwitz. 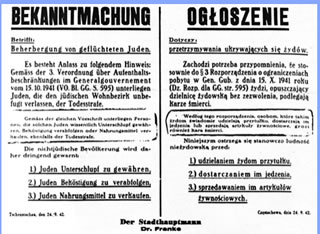 "Israel is pursuing a global policy that Russia needs, not only in the context of the conflict with Iran. The anti-Polish campaign can be beneficial to both Russia and Israel because let's not forget that the famed Fort Trump has not even begun to be built in Poland. Russia will do anything to make sure it will not be built. And it would be also much easier for Jewish communities to collect money from a nation considered to be the perpetrators of the Holocaust,"
- this is how the editor-in-chief of the weekly 'Idziemy,’ Henry Zieliński, views the sense of celebrating the anniversary of the liberation of Auschwitz at Yad Vashem in Jerusalem organized by Mosze Kantor.

In the article entitled "In the shadow of the crematoriums," Fr. Zieliński also quotes Szewah Weiss, who stated in response to the Yad Vashem ceremony that "a currency exchange office has just been opened in which the truth is sold for money and politics."

The editor-in-chief of the weekly "Idziemy" notes that the anniversary of the liberation of the Nazi Germany concentration and death camp in Auschwitz is celebrated in Poland with delegations of a lower level than those who showed up at Yad Vashem in Jerusalem. He points out that in this sad state of affairs it is important to ask six fundamental questions of the attendees of those commemorations:

Why only in Poland the Germans imposed the death penalty for helping Jews, while in other countries an administrative penalty was sufficient?

Why did the first concentration camps on Polish lands were built in September 1939, and for whom were they built?

Why the Final Solution of the Jews (Endlösung) was preceded by mass extermination of Polish elites in Piaśnica, Palmiry and many other locations and by mass imprisonment of professors from Cracow and other cities?

Why all these events had to precede the first mass transport of Jews to Auschwitz that took place in the spring of 1942?

What was the goal of frugal and calculating Germans in bringing Jews from Budapest, Athens, Paris and all of Europe to kill them in Auschwitz?

Finally, why Poles, unlike Germans and Austrians, did not destroy the remnants of German concentration camps after the war?