“The key element of control is to divert public attention from important issues,” says Kukiz. 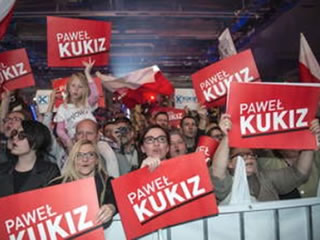 Paweł Kukiz decided to warn the nation against techniques of a governmental manipulation. He mentions among others: talking down to people, distracting them, and appealing to their emotions rather than reason.

“You absolutely need to read it!” he wrote on Facebook, posting 10 techniques used by the government to manipulate the nation through media:

1. Distraction. The key element to control the nation is to divert its attention by providing a constant flow of insignificant information, while important changes are being made by the political and economic elites. Such distraction strategy is critical to prevent the public from being interested in basic knowledge of science, economy, psychology, neurobiology and cybernetics. “Distract the public attention from important issues by providing endless, insignificant news. The nation should be busy at all times, too busy to think.

2. Creating a problem with ready solution. This method is also referred to as “problem – reaction – solution.” A situation (problem) is created to trigger the nation’s demand for a prompt action to prevent the problem from re-occurring. An example of that is encouraging violence to make citizens willing to compromise their freedoms and accept stricter laws in the name of safety; or creating the economic crisis to justify the radical cuts in benefits.

3. Gradual introduction of changes. Radical changes are served in installments over the years. Limits of the nation’s tolerance are pushed step by step to eventually lead to acceptance. This strategy was used in the 1980s and 1990s to introduce drastic social and economic changes that led to a neoliberal economy with minimal benefits, privatization, a lack of stability, mass unemployment, low salaries and no guarantee of a decent pay. If those changes were introduced at once, they would cause a revolution.

4. Delay. Another way to introduce an unwelcome change is to present it as a necessity that simply has to happen in future. People find it easier to accept a vision of hardship in future, rather than at present. They also have a tendency to naively believe that “everything will be all right” and they may even be spared the unwelcome change. Delaying changes gives people time to getting used to it and therefore accepting them when they eventually happen.

5. Talking down to the nation. Most advertisements and announcements tend to use language and arguments appropriate to address children or people with mental issues – simple and infantile. The more they want to blur reality, the more infantile words they use to communicate. Why? If you speak to someone as if they’re 12, they will probably subconsciously take that suggestion and react to what you say as if they really were 12 or younger.

6. The focus on emotions. Playing on emotions is a classic technique to obscure rational thinking and common sense. Additionally, using plenty of emotional phrases is a trigger to ideas, desires, fears, anxiety and impulse, leading to desired reactions.

7. Encouraging ignorance. The nation needs to be incapable of understanding the methods of control. Education offered to the lower class citizens has to be appropriately poor and average-level in order to maintain the gap between rich and poor, as well as to make control method incomprehensible to lower classes.

8. Promoting mediocrity. The nation needs to believe that being stupid, vulgar and uneducated is ok.

9. Encouraging the feeling of guilt. People need to believe that their failures are their fault and their lack of intelligence, ability or will, rather than the system. Instead of rebelling against the economic system which puts them in disadvantage, people will feel guilty and undermine their own worth, which will lead them to depression. Depressed nation is a passive nation, unable to take actions to change the system. Passivity means lack of revolution.

10. Analyzing citizens to know them better than they know themselves. The rapid development of science in the last 50 years has caused a growing gap between the generated knowledge and knowledge available and explained to masses. Using biology, neurobiology and psychology, the governing elites obtain an advanced knowledge about individuals and societies. Such superior knowledge means that the governing elites know their people better than they knows themselves and therefore are able to exert a greater control over the citizens than they themselves.