Will Russia take over Belarus and threaten Poland? 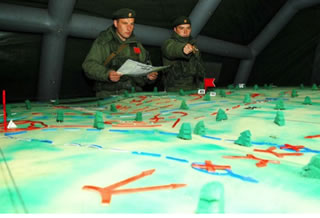 Military expert Aleksey Arestowicz wrote on his Facebook profile: „When everyone calmly awaited some sort of dirty trick on the part of Kremlin in one of the Baltic States or in Odessa, Putin found an easy and elegant solution – seizure of Belarus!” It is going to happen during the military maneuvers „West (Zapad) – 2017” that will commence in Belarusin the summer of this year."

Arestowicz argues that Russia will threaten Ukraine with war not only at two fronts (Eastern and Southern) but simultaneously at three. Ukraine would have to move some of their troops in the direction of Belarus. That in turn would put increased pressure on the Ukrainian economy.

Next, Russia has a plan of creating real threat to Lithuania and Poland. „One thing are the ominous statements and provocative flights of pursuit aircrafts but a different thing is the concentration of military forces in near vicinity. Soon Poles, Baltic States and other Europeans will suddenly feel that the war is not somewhere far away in Syria or Donbas, but just around the corner. They will feel that their small cozy world of wind turbines and comfortable roads became the potential area of military conflict between NATO and Russia, with all charming consequences for people, industry, ecology and geography," said Arestowicz.

According to the expert, there is yet another purpose of Putin deploying his troops to Belarus. He wants to prevent the formation of the Baltic See - Black See Union, where Belarus was supposed to have a supportive role. „The West does not even have a formal reason to protest against soft occupation of Belarus because Belarus and Russia are members of the Union State of Russia and Belarus, so everything seems to be in order,” Arestowicz points out.

According to him, it is even difficult to predict the internal reaction in Belarus, as this country is a „political black box.” He thinks we have three possible scenarios, depending on how the political leaders and people of Belarus in general will view the soft occupation. One of the scenarios will be the attempt of forceful removal of Lukashenko from power and creation of puppet government, followed by „creeping domestic guerilla warfare.”

When asked on what grounds he foresees the occupation of Belarus Arestowicz replies: „Formally everyone will avoid such a terminology. Some units will be flamboyantly withdrawn at the conclusion of the maneuvers, but some will remain – as if by accident. Putin will say to Lukashenko: „You see Sasha, this is a must. The situation is tense. The NATO is on our footstep. WE have to remain cautious.” And he will pretend in front of the West: „It just so happened,” he will say. “I am not to blame,” the expert said to „Belarussian Partisan.”

He points out that the war with Georgia was preceded by maneuvers „Caucasus-2008,” and during the exercises „Caucasus-2012” Russia formed a group that later seized Crimea. If they did it twice in the last eight years, why shouldn’t they do it again?

Poland and Lithuania have additional NATO forces stationing on their territory now. Belarussian leaders so far keep quiet about maneuvers „Zapad-2017” and about their goals. In Russia it is openly being said that the maneuvers will be the response for supposedly unfriendly actions of NATO. The scale of these maneuvers is to be without precedent, according to the statements of Russian politicians and army officials. And as the NATO forces are there permanently, it is logical to assume that the Russian troops will enter Belarus to remain there permanently,” said Arestowicz.