Russia’s imperial stance will not disappear with Putin. We should not get our hopes up if he dies. 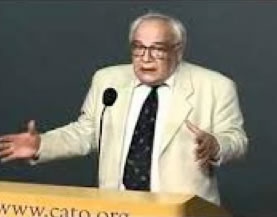 wpolityce.pl: Putin has not made any public appearances in a week. A Russian paper called the Russkiy Monitor says that yesterday [March 11] they received an anonymous e-mail from an official of the Central Clinical Hospital of the Department of Presidential Affairs in Moscow. The e-mail’s author wrote that Putin had an ischemic stroke. Is Putin on his death bed?

Vladimir Bukovsky: It’s too early to comment, and certainly it’s too early to consider Putin gone. But everything is, of course, possible. There’s been talk about Putin being ill for a while now. That he has cancer. Over the last six months these rumors have increased. However, no one knows from where they originate. And no one can confirm them. Even the toughest scoundrels have strokes, so it is possible. He is over 60 years old. No one is made of steel, even those who pretend that they are.

wpolityce.pl: Then let me ask in a different way: What would happen if Putin died? With Russia? With the war in Ukraine?

Vladimir Bukovsky: According to the Russian constitution, Dmitry Medvedev would then become the acting president, until an early election could be set. There is a chain of procedures in such a case, and there is no reason to believe that Russia would erupt into chaos. Nor any reason to believe that Russia would suddenly become democratic. The main problem is that they don’t exactly have anyone to replace him with. Medvedev is popular and Putin trusts him. He lacks charisma and a few other things, which undoubtedly Putin possesses, but the rest of the Kremlin’s puppets are even less suited for the role of czar. Therefore, it’s likely that Medvedev would remain at the helm of power for a longer period of time. Russia is ruled by the KGB, anyway. Hence, it’s not that important who plays the role of the public puppet. Same thing with Kremlin’s agenda. Maybe it would change, maybe it wouldn’t. Russia’s imperial stance will not disappear with Putin. We should not get our hopes up if he dies. Anyway, as I’ve already mentioned, it’s too early to speculate.

wpolityce.pl: Yet there are some people who dream of replacing Putin. One of them is the Minister of Defense, Sergey Shoygu.

Vladimir Bukovsky: Maybe he has such a dream but that doesn’t mean it will come true. There’s this Russian joke about an elephant in a zoo. A sign hangs on the pen’s fence informing visitors that the elephant is capable of eating up to a ton of vegetables per day. People stare at the elephant in amazement: “One ton? Unbelievable!” The elephant’s caretaker responds: “Indeed, he’s capable of eating a ton, but someone has to first feed him that much.” Power in Russia is similar to that elephant. And about the rumors of the death of the Russian president, I advise skepticism. Many people hate Putin so much that they are ready to invent his death, if only to enjoy reading about it. The rumor might be a trick, a cheesy joke, or some internal strife.

The interview was conducted by Aleksandra Rybinska