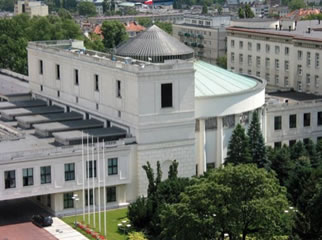 “I hope that the President will justify his expenses,” Małgorzata Kidawa-Błońska, Marshal of the Sejm, said after Newsweek suggested that Andrzej Duda fraudulently used public money for private business.

It was three days earlier, and since then the prosecution showed interest in a similar incident, this time regarding Prime Minister Ewa Kopacz’s public money expenditure. As soon as her name came up in the same context, the Chancellery immediately changed its stance and the Press Office of the Sejm, managed by the very same Małgorzata Kidawa-Błońska, issued a statement, radically different from what she said three days earlier. The full statement is as follows:

With regards to numerous journalist enquiries and inaccurate information circulating in media, Chancellery of the Sejm would like to confirm that pursuant to article 43 of the MP and Senator Mandate Fulfillment Act of May 9, 1996, MPs are entitled to unlimited free public transport, including air transport, within the home country territory.

Resolution no 18 of Sejm Presidium grants each MP up to of 7,600 PLN a year to cover the cost of overnight accommodation when performing their mandate duties away from their home address or outside the capital city of Warsaw. The responsibility of determining the nature of MPs overnight stay is within the competence of individual MPs, rather than the Chancellery of the Sejm. MPs declare the nature of their overnight stay in writing, when submitting their invoices.

MPs travelling in a car when performing their duties are entitled to an allowance of up to 12,500 PLN a month to cover the cost of fuel. The limit of the allowance is based on fuel expense calculation for a maximum of 3,500 km a month and its current top limit is 2,925.30 PLN a month, calculated in agreement with Ministry of Infrastructure’s regulations.

The Press Office of Chancellery of the Sejm

Why was such statement not published immediately after the accusations of Tomasz Lis directed at the President? It appears that the statement was issued mainly for the purpose of justifying the cost of Ewa Kopacz’s flights to Gdańsk.

The statement should be brought to the attention of Joanna Mucha, the Civic Platform’s spokesman, who called on President Duda to explain his flights and overnight accommodation’s expenses in Poznan. Mucha claimed that the president’s statements regarding expenses “raised doubts, are less rather than more informative and deliberately misleading.” The President called Newsweek accusations as slanderous.