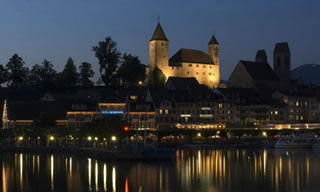 Diplomatic pressure has been successful! One of the oldest Polish museums abroad, in Swiss Rapperswil, will remain for now in its historic location where it is currently housed.

Until recently the situation appeared to be hopeless. Local authorities were seeking to remove the museum from its current historic location in a medieval castle.

However, in November 2016 President Andrej Duda visited Rapperswil. “It is important to me that the Museum remain in the castle,” he said at the meeting with the Swiss President Johann Schneider-Ammann. He also met with the city authorities.

The problem is that federal authorities in Switzerland are unable to exert direct pressure on the local policy in Rapperswil. However, the message has been clearly sent that the plan to remove the museum from the castle should be reconsidered, said Anna Buchmann, museum director.

The Ministry of Foreign Affairs also calls our attention to the fact that in Switzerland "the will of the politicians from the central level does not always translate into action at the cantonal or municipal level."

Anna Buchmann notes, however, that the city rejected the development proposal for the castle, which anticipated the removal of the museum.

“The new project is a competition, and proposals will be voted on by the citizens. These votes take a long time,” she added. “New proposals will be reviewed up to the end of 2017. Then we'll see to what extent the city authorities are ready to make changes. The position of the city and municipal authorities has certainly changed, there is no longer a question of completely closing down the museum in the castle. However, the character of the museum is only beginning to take shape,” specified Anna Buchmann.

The Foreign Ministry has assured us that “the future of the museum was and is the subject of ongoing contacts at different levels between Warsaw and Bern." Ministry officials assured us that a series of meetings was planned for January 2017 between the ambassador in Bern and local interlocutors.

"The museum is waiting to be administered by the newly elected president of the city, who is a particularly important partner in this matter," - added the Foreign Ministry. These activities are supported by the Ministry of Culture, which has developed a concept for modernizing the museum.

"Rzeczpospolita" newspaper has written about problems with the facility for several years. The city authorities located on the northern shore of Lake Zurich, 40 km from Zurich, planned to change the character of the medieval castle. The development plan envisaged its modernization and gradual privatization. There were plans to convert the rooms which currently contain the Polish Museum into a restaurant.

Representatives of the local Polish community brought to our attention the fact that the decision to close the museum was preceded by an "unprecedented campaign of hatred directed against the presence of Poles in Rapperswil, organized by local politicians."

The campaign was spearheaded by the private society named the “Pro Schlos” group and the publisher of the local newspaper "Obersee Nachrichten." This pressure led to the situation that no agreement was reached with the Rapperswil authorities for the renewal of the 25-year term lease for the museum in the castle.

The Museum was established in 1870 by Władysław hr. Broel-Plater. Various famous Poles have lived in the castle, including Stefan Żeromski who worked there for four years.

The museum collections include paintings of Joseph Brandt, Joseph Chełmoński, Theodore Axentowicz, Jacek Malczewski, medals, old maps, sculptures and military antiques. There are also historical artefacts such as a locket containing the hair of Tadeusz Kosciuszko, his watch, Henryk Sienkiewicz’s chair and Ignacy Jan Paderewski’s silent keyboard for practice. There are also artefacts related to the internees in Switzerland during World War II, soldiers of the 2nd Polish Infantry Rifle Division.