Poland must be able to defend itself 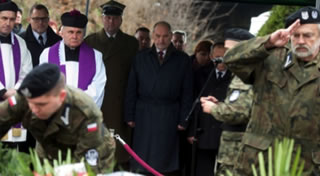 "It is on us [Poland] that the aggressor's avalanche may fall. Therefore, we must be able to decide about the means of defending ourselves," said Poland’s Minister of National Defense, Antoni Macierewicz

The Minister of Defense announced that the priority of his office is the July 2016 NATO Summit in Warsaw. The outcome of the meeting will address the question whether it is feasible to establish military bases in Poland and permanent presence of the NATO troops in Poland. The Summit in Warsaw will be important in determining whether Poland is a meaningful, equal member of NATO, whether the same rules apply to Poland that already apply to Germany, France, Belgium, the Netherlands, and other countries, or whether Poland is a second-class country.

“That means the issue of possibility of stationing the NATO, or the American bases on our territory, or at least a permanent presence of the NATO soldiers,” said Minister Macierewicz. He also pointed out that other states can decide independently on the permanent presence of NATO troops on their territories.

“With respect to Poland, we still have to deal with a German veto in this matter. This presents enormous difficulties for us. I hope that recent events will not contribute to sustaining this veto, but just the opposite, and this obstacle will be removed,” he said. The Minister stressed that Poland is a front-line state, and therefore, the most threatened by an attack.

"It is on us [Poland] that the aggressor's avalanche may fall. Therefore, we must be able to decide about the means of defending ourselves. Among those is the involvement of the allied troops stationed on our territory, whose presence would strengthen our security, whenever it is necessary. That is why this Summit is very important,” said Macierewicz.

The minister warned that “those in the country who shout that there is no democracy, must realize that with their attacks they strike directly at the security of Poland and the Polish people. They have become a weapon working for Mr. Putin's Russia, because they undermine the credibility of Poland,” he added.

Macierewicz also confirmed that a construction of the missile defense base in Redzikowo, near Slupsk, is scheduled to begin in the spring. “This is another part of the system already built in Romania that is already operational.” He added that “it is not the question of whether such a base will be built, but rather when it will become operational. Our national security requires this system,” he stated.

The Minister stressed that the missile defense project could have been ready by 2008-2009. However, its implementation became significantly delayed because of the negative attitude of then Poland's Minister of Foreign Affairs, Radoslaw “Radek” Sikorski. “This is the result of his [Sikorski’s] personal efforts that this project was delayed by seven years,” he added.

The NATO summit will be held July 8-9, at the National Stadium in Warsaw. The leaders of the Summit delegations will meet at the Presidential Palace - in the same reception hall in which the Warsaw Pact was signed in 1955. The decision to hold the 2016 NATO Summit in Warsaw, Poland, was announced at the previous NATO Summit in Wales in September 2014.