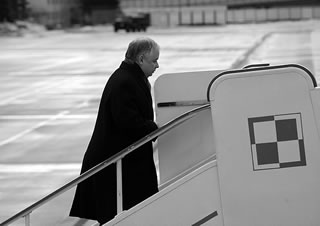 The key to the Smolensk tragedy lies in Poland, and this is difficult to everybody. Clearly it was a coup, but what kind of a coup? What’s important here is the definition of a coup.

I have not written about the Smolensk tragedy for a while. I was a little afraid to write again about this, but what the hell! I have nothing to lose, and nothing will help me anyway. I'm free!

(…) From the beginning I have believed that the key to Smolensk is in Poland, and that it was a coup. I will develop this point further, but first, I need to make an observation about the latest comments of the opposition journalists on the recent statements by Minister Macierewicz (about asking NATO for help), with which I agree completely; the sole purpose of these comments is to depreciate the Minister and not to address the content of his pronouncements.

I start with my usual disclaimers: I do not know technical issues well enough to discuss avionics, physics, engineering, and chemistry. I am skipping those issues and focus exclusively on the action of the State, the procedures and the people responsible. I've talked about this issue many times, so in this article I will try not to repeat myself.

It is widely believed that the coup must be some kind of a film action with shots and explosions. I ask, then, how to call an institutional action, which is to hinder or prevent the journey of the political and ideological opponent, whereas such operation consists of a series of omissions, broken procedures, and silent or not consent, and approval of such behaviors at the decision-making levels, where such situation with the whole pattern of omissions led to the airplane crash of April 10, 2010, and then effectively hide their tracks? For me it is also a coup.

Assume that someone from the camp involved in the political struggle with the camp of late President Lech Kaczynski told his colleagues: "Make sure he does not reach his destination." So, they did it.

I have never seen such a badly prepared presidential visit, and I participated in preparations of three presidential visits of Aleksander Kwasniewski and about ten visits of Prime Ministers, not to mention visits of the ministers and other delegations. I will not be judging in this post or pointing out who is guilty, although I have my suspicions, because that is not the purpose of this comment.

I would like to look at Smolensk, and what happened in the aftermath of this tragedy, just from the point of view of glaring omissions by the state institutions. I believe it was intentional. Some prefer to refer to this situation as "a typical Polish mess." Yes, but if that is the case then specific persons are responsible for creating a situation in which the "mess" becomes a deadly weapon against political opponents. These were particular persons on specific positions, performing or not performing specific orders and commands, stopping and preventing specific actions of specific institutions. Tolerating such state of affairs, the appointment of incompetent people, knowing that they are incompetent at the decision-making positions, all this constitutes for me a peculiar form of attack on the state and on the incumbent president.

Let's look at the instigators, in other words the actions of one or more foreign intelligence services. I will not comment here whether inspiration from foreign intelligence services was involved because I do not have enough data. And I do not know whether any countermeasures have been taken that could support or disprove my hypothesis. Even if we assume that there was no inspiration from foreign intelligence, it is obvious that the foreign intelligence was involved in the direct aftermath of the tragedy, which is also within the scope of counterintelligence. I do not want to determine which country should be suspected of organizing this operation, although personally, I am convinced that the Russians could stand behind it. Again, this is just my hypothesis and now I will not explain why. I suppose, too, that intelligence services of our allies, in particular Germany, could take advantage of this situation to their own advantage, but I'm sure that the Smolensk tragedy was as much a surprise for them as for our whole nation. Well! Perhaps almost whole….

(…) I tried to simulate the course of events, the action plan according to the hypotheses of "intentional mess" and "intelligence operation." In both cases, one obvious conclusion was terrifying for me: in order to plan such action, perform and succeed, and then just erase the traces of it so that no one finds out the truth, I would have to have the sources on both sides (Polish and Russian) and such sources must be at the decision-making and mid-level executive positions. I could point out specific spots and places, but it is pointless because it will be treated, as always, as another provocation of “esbecja.” But I talked about this with several private individuals. Of course, such sources would have to be prepared, properly validated, in other words legitimized. Therefore, I believe that the "intelligence operation" is more likely than a mere "mess," which, incidentally, can be used as a camouflage for an intelligence operation. This diagnosis can also explain why the actions of Minister Macierewicz and his team too often face insurmountable barriers.

I have long been planning to write about it. I conclude by saying that the real people stand behind this tragedy and it is they who should bear the responsibility for their individual contribution in this case, even if the cause of the crash was a "mess." At this level, one specific person was responsible for it. Unfortunately, I doubt it will ever happen because of our naive faith in the prosecution and the law combined with the lack of any counterintelligence shield.

About the Author:
Colonel Piotr Wronski is a former employee of the First Department of SB, and officer of the Bureau for Government Protection and Intelligence Agency in the Third Polish Republic. He is the author of a book "The Founding Conspiracy. History of a Murder" that exposes the backstage activities of the communist security services, including the 1984 murder of the Blessed Father Jerzy Popieluszko.