Once a communist-era Urban cohort, now a defender of free speech 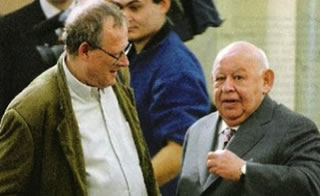 A popular journalist in communist-era Poland is sounding the alarm that the new PiS government is destroying public media, and a "witch-hunt" has begun in Polish Public Television, TVP. It is the irony of history that the complaining journalist himself was on the Stefan Kisielewski list of regime journalists during the communist era. Also, his name was one of the 64 names of secret collaborators (read: sniches) and officers of the communist-era Military Intelligence Services (WSI).

The former diplomat and journalist warned that the PiS government would destroy, rather than heal, public media. He also panicked that a "witch-hunt in TVP" has begun. As a result of this complaint, the EFD issued a statement expressing its "serious concern" about the anticipated changes. Their goal, as the letter of the Federation presumes, is to increase control over the public media and "repolonize" them. Mogens Blicher Bjerregourd, President of the EFD, warned that the government must respect the principles of the independence of the media to ensure their freedom of operations.

Bilik himself is not well-suited for the role of defender of the media’s freedom. He is a person of a controversial biography: He was the encore of "television news" in TVP in the 70s and 80s and the head of the TV editorial board, in 1984 he was on the famous "Kisiel List" as one of the journalists most collaborating with the Jaruzelski's communist regime during the martial law.

In addition, in 2007 his name was among the 64 names of secret collaborators and WSI officers whose actions went beyond the tasks of national defense, as defined in the report on verification of communist special services. According to Annex 16 of the WSI Report, his main task was “to select and recruit collaborators."