What if Nurember trials never happened? 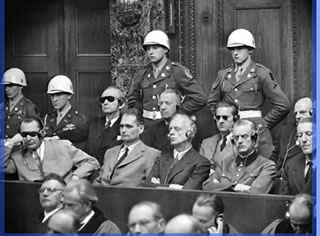 It is only now - under the government of the Law and Justice Party - that true democracy and pluralism are being finally restored in Poland after 80 years of domination and communist control of Poland.

Until the 2015 parliamentary elections, there was no real democracy in Poland. The political system of the Third Polish Republic was built on the founding lie of the Round Table Agreement in Magdalenka, where the communist party led by General Jaruzelski assured the inviolability of its own interests by supporting selected representatives of the Solidarity Movement as partners in perpetuating their power and control over Polish people. They agreed on the terms of the deal: "You do not touch us and we won’t touch you!" This arrangement is also known as the communist crimes “Crossed out in Bold." The immorality of this agreement that sanctioned, awarded and glorified high treason directly impacted the quality of ensuing democracy, free speech and the media!

Today in addition to state owned media, there is a vast majority of private channels and commercial titles in Poland. Close to 80% of them are now owned by foreign corporations, with majority owned by the German capital. Like in all other EU countries, state owned media are controlled by the ruling political coalition. For comparison, the Sweeditsh SVT is under the management of the foundation / stiftelse, which includes persons appointed by the Swedish government.

The founders and owners of the Polish commercial media embezzled public funds to take over media inherited from the communist system and build new ones. Communist criminals like Kiszczak and his people, their secret collaborators, the most deserved servants of the communist censorship system, and the most loyal communist journalists employed in the factory of lies in the media of the totalitarian state overnight became the avant-garde of free press in post-communist Poland.

The most important communist luminaries of "free" post communist press in post-communist Poland were: Zygmunt Solorz-Żak, Jerzy Urban, Jan Wejchert, Mariusz Walter, Bożena Walter, and Milan Subotic (TVN's program secretary). The cadres who serve and direct the editorial work in today’s leading Polish so called “liberal” media are the people who either themselves were or became trainees of the most vicious communist propagandists under the Jaruzelski junta.

It was in the vital interest of the owners of these media and cadres employed by them to support the political system called the Third Republic and the so-called Magdalenka scam.

Those communist luminaries in advanced age today, some of them already dead, like Bratkowski, Bartoszewski, Passent, Rolicki, Miecugow, Zimiński, Olejnik or Paradowska, employed and are still passing on to young adepts of journalism their propaganda skills such as, for example, mastering the information selection process formerly known as "censorship," but also an attitude of total loyalty to the elites of the post-communist system. The most important and most effective of them has been Zygmunt Solorz-Żak, Secret Communist Collaborator "Watch."

What the PIS government is attempting to do today is just to counteract through pluralism in the media the legacy of decades of communism and post-communist censorship and brainwashing.

The reality described above can be better explained by an example. According to the Polish film maker Grzegorz Braun, from 1989, we have been living in such reality as Germans would have been living if the Nuremberg trials had never taken place and the German criminals were never brought to justice. After a couple of years, of probably light political quarantine based on the principle of the "Crossed out in Bold," Himmler would pronounce self-criticism from some NSDAP tribune about the era of errors and mistakes, condemning Adolph Hitler. Joachim Ribbentrop would be removed from the main stream media and would become an ambassador in some far away land. Upon his return to Berlin some years later, he would act as an authority on foreign affairs and people would address him per Mr. Ambassador like they do with Stanislaw Ciosek in TVN. Goebbees would become the pioneer of modern media and would publish an influential weekly “Nein!” Eventually he would set up a new TV and everybody would praise him for lifting standards of the film industry in Germany and for great moves produced under his watch. We live in such a country right now, in a country where treason was not named as a crime, in which murderers not only avoided punishment but were never even named and condemned as murderers.