WSI was the most powerful criminal group in Poland 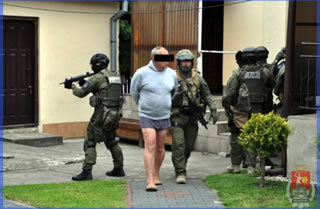 “The Military Information Services (WSI) was the most powerful mafia in Poland. We, gangsters from Pruszków, needed its protection,” claims the key witness Jarosław Sokołowski, aka Masa, in his interview for Gazeta Polska.

Masa said that his criminal organization had links all over Poland in the 1990s. “The Military Hospital on Szaserów Street in Warsaw was practically ours. In the 1990s our competitors were trying to kill Pershing (boss of Pruszków gang Andrzej Kolikowski), but shot Florek, Pershing’s driver instead, who was then transported to the low-standard Pruszków Hospital. We could not let our man, a member of Pruszków gang, die there,” Masa told Dorota Kania from Gazeta Polska, “so we took him to the hospital on Szaserów Street instead. The police did not stop us. Florek went through a surgery there and pulled through. Any accidents we had, we went straight to the hospital on Szaserów Street, where we knew the staff and medical professionals,” said Masa.

When Kania asked him whether he learned to shoot at the public shooting facility at the Technical Military University, he replied: “Yes, that is where I learned to shoot. Soldiers, who went there, spent most of their time drinking beer and snacking.”

Who helped the Pruszków gang?

“Professor Witold Modzelewski made rules and regulations to help us. He did not have a car, so he used to tag on to my security team. Our cooperation with the WSI became closer in mid-1990s, when together with Pershing we sold helicopters and transporters to Syria,” said Sokołowski.

“It will never be possible to prove that WSI did anything wrong,” concluded Masa, “but at the time when WSI flourished, it was not possible for any company to earn loads of money without its protection. WSI was rotten, and Macierewicz should be really praised for destroying it,” he said.