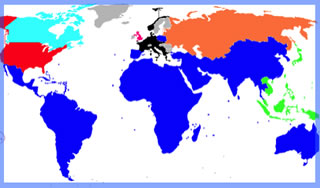 The old model of “bourgeois terrible,” such as the one from a poem by Julian Tuwim, from a novel by Maupassant, or from Balzac, can be characterized by the words of our poet: "They look to the left, they look at the right - and while looking - they see everything separately" (J. Tuwim, poem "Residents" from the volume "Gypsy Bible").

The most important part of this model is the part that does not change: seeing everything separately, not linking together the simplest phenomena and facts – as long as they are inconvenient. The new model of the "terrible bourgeois," improved somehow, differs from the old one in that in its consistently Manichean view of the world, the terrible bourgeois “looks to the left only to flatter the current ideology dominating the world salon, and looks to the right only to discover the source of all evil; and he pushes all the uncomfortable facts there.

The President of France adds to this phenomenon a special perspective: he identifies geographically, nationally, and through statehood this source of all evil: it is Poland. The French President exuberantly receives Vladimir Putin back in European salons in August 2019 to publicly announce a month later: "La Pologne bloque tout" (Poland is blocking everything). Macron called activists of today's "terrible bourgeoisie" from around the world to go to the Vistula River to manifest, protest and "unblock everything." This is an unusual from a diplomatic point of view behavior: 1) the president of an EU member state openly calls for manifestation to overthrow or at least break the will of the government in another EU member state. This is not the first time that the countryman of de Funès, actor - gendarme of all time, points to Poland as the source of all evil in the world. In this case, however, the mechanism linking the 21st-century "terrible bourgeoisie" ideology of progress with the clever defense of one's own interest is particularly transparent.

On September 23, Greta Thunberg, the latest marketing product of this ideology - together with fifteen other child activists - lodged a complaint with the UN Committee on the Rights of the Child against the governments' disregard for environmental pollution. In their complaint, young climate fighters stigmatized five countries in particular: France, Germany, Brazil, Argentina and Turkey. This was a big bang! How was that possible? After all, France and Germany, these leaders of progress in the fight for clean air! Although this purity is built on the gigantic nuclear power plant infrastructure that has been developed for more than half a century, the technology that the militants for the good of nature don’t like either - but it is difficult to please them... Anyway, how can you attack the nation of Robespierre and Guillotin” (not only the pioneer of humanization in the field of decapitation, but also the master of the lodge ‘Brotherly Consent’)?!

The Tweeter Team Progressistes, which preserves and protects the power of the President of France, was outraged: Miss Thunberg is uttering nonsense. Emmanuel himself cannot argue with the girl from Sweden, who is currently worshiped by Progressives. In the name of agreement among the brothers, he therefore found the guilty one on whom the new riders of the climate apocalypse should focus their anger. As we already know, Poland is the guilty one – this blockage on the road to a new wonderful world.

Describing this story, "Le Monde", the daily of Guillotin's heirs, has listed 20 countries that emit the largest amounts of CO2. Unfortunately, Poland is not on this list at all. China is first, producing as much pollution as the second and third on the list United States and India together. Russia, Japan and Germany complete the top six. France is indeed far 18th. The lawyer on behalf of Miss Thunberg explained that the complaint pointed to France, next to England and Germany, not only because of their current position on the list of poisoners, but because of their historical responsibility as an empire that had built their power on poisoning the atmosphere for centuries.

This is where Napoleon IV's nasty deal is revealed. And not only his. Poland was not on the map when France exploited 10 million square kilometers of its colonial possessions in Asia and Africa. There was also no India - because they were a British colony. China was a semi-colony of European empires. Now countries such as Poland that have regained their sovereignty and are trying to take part in the race for a better place for their citizens at the table of material well-being are being inhibited in the development of their own industry - so that they would not catch up with the old colonial empires defending their position. This is a new, progressive doctrine of containment: in the name of climate protection. The "terrible bourgeois" from Paris will not attack powerful China nor even India or Russia. Anyway, they did not even sign protocols limiting the emission of carbon dioxide. However, it is easy to attack Poland. Make sure that Poles do not even think that they would ever be able to get closer to the standard of French life! This is how President M. thinks and winks at his brothers with whom he is in agreement: in petty-bourgeois cynicism and hypocrisy.