FURY OF THE LOSERS 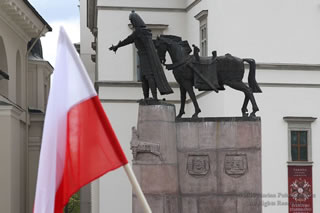 We are not alone when it come to the rebellion of the losing elites. What the US is experiencing right now is almost identical to the scenario that unfolded in Poland after the 2015 elections. As the United States is the world power, the scale of this phenomenon is larger.

It has already began with the election campaign. Donald Trump was constantly put down, and was not spared of any worst possible verbal abuse. Besides, no one really seriously thought that he could possibly win. Hillary Clinton was the firm favorite of the establishment – both American and international.

One cannot dismiss the similarities with our presidential elections, where Bronisław Komorowski, then President, was seen as the firm front runner. According to Adam Michnik, for Komorowski to lose elections it would take him “to run over a pregnant nun at the pedestrian crossing, while being drunk.” After all, who was to be his opponent? Some unknown candidate, anointed by Jarosław Kaczyński? The Civic Platform and their supporters could not believe the results of the elections. Such „nobody” like Andrzej Duda to become the President! Impossible. At that moment, they launched a frontal attack on the Law and Justice Party (PiS). That massive assault seemed to have led to PiS winning the subsequent 2015 parliamentary elections. Relentless attacks on this party continue to this day.

The same scenario is unfolding in the United States. In fact, it has already happened. The day of the election finally came and America woke up in a new reality. The nation rejected the favorite of the establishment. But it was not something that the outraged liberals and lefties were willing to put up with. The protests have started, full of shouting, crying, lamentations and wailing. The organizations that are the equivalent of our infamous Committee for Defense of Democracy (KOD) brought people out to the streets. A restaurant and a branch of a bank were demolished, cars were set on fire, stones and concrete slabs were flying. The police had to use tear gas and pepper spray to calm down the situation.

It did not bring the protests to an end though. The always reliable celebrities joined the ranks; various actors, models and TV presenters in a vulgar manner were expressing their disgust with the fact that the election winner was not their candidate. They organized a march of women in Washington, a copy of the Polish Black Protest march, which attracted approx. 200,000 women. This protest was attended by the move producer Michael Moore. From the scene Madonna shouted demands for freedom and equality. She concluded her performance with words: „To all haters who think that our protest will not change anything, I am saying – F..k yourselves!” and with songs; „ Donald Trump, suck your (...). I am not your bitch. Do not smear us with your shit.” Ashley Judd recited: „I sense Hitler on the streets, it is just the toupee that replaced the moustache.” All that because Trump opposes abortion and has already withdrawn the financial aid to pro-choice movements. Barbara Streisand was terrified by the perspective of conservative nominations to the Supreme Court that would create the majority and in turn create threat to women’s rights.

The rally in New York was led by actors Robert De Niro and Alec Baldwin as well Michael Moore. De Niro thundered from the platform: „We had power to get up after the attacks of 9/11. We will have power to oppose the new power.” In this speech he did not throw insults at Trump like he did during the election campaign. Back then he described the Republican candidate this way: „Trump is incredibly stupid. He is a pest, a dog and a hog (…) I would like to slap him in the face.” During the New York rally, the celebrities incited people to protest against the results of democratic elections. They were arguing that Trump did not have a legitimate mandate to be in power. That is when Moore announced the continuous protests „until Trump steps down.”

One has to admit that our celebrities seem to be mellow lambs when compared with aggression and foul vocabulary of their American counterparts. Their hatred is wrapped in a bit softer casings.

The outcry of American celebrities was echoed by the media, particularly CNN, Washington Post and Huffington Post. They are always on the frontline of the battlefield – like our Gazeta Wyborcza, TVN and TVN24.

Foreign media were not far behind in their attack on Trump, calling him Emperor Nero, who introduced foul air from America and only „pours salt over Europe’s wounds.”

Polish celebrities do not like Trump either. MP Szczerba announced that „Trump’s place is in the dumpster” while Tomasz Lis said that „DT spat in the faces of the previous presidents.”

The lefties and the liberals are alike everywhere. They are joined by their mutual hate of the conservative movement that is on the rise in many countries.