IZAAKA STOLZMAN a/k/a Zdzisław KWAŚNIEWSKI was a NKVD criminal who harmed tortured and observed screams of the victim. 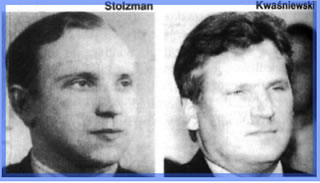 A shocking biography of the father of Aleksander Kwaśniewski who served as President of Poland between 1995 and 2005.

The father of Aleksander Kwaśniewski was a Russian Jew in the rank of colonel of the NKVD, who right after WWII was "incarnated" into becoming the Pole in order to organize supervision of the Security Bureau (“UB”) over the Polish population in the areas of Western and Northern Pomerania.

At the end of the 1940s, he changed his name from Izaak Stolzman to Zdzisław Kwaśniewski. The NKVD provided him with a diploma of higher education in medical studies at the University of Poznań and necessary documents to authenticate the medical profession.

Izaak Stolzman is accused of murdering a patriotic Polish population in the Southern and Eastern Borderlands of the Second Polish Republic and in Eastern Lesser Poland, as well as plundering and committing crimes against Jews in ghettos during the German occupation of the Vilnius region and Belarus.

Once the Soviets re-entered Poland in 1944 on the way to Berlin, Isaac Stolzman, commanding the NKVD unit in 1945-1947, committed war crimes on German prisoners, Swedish sailors, and armed Polish anti-Soviet resistance groups.

He carried out executions in the area of ​​Borne, Sulinowo (Gross Born), in the now non-existing village of Doderlage, in Berkniev (Barkenbrucke) near Borny Sulinów, where only fragments of destroyed houses were left. In this area, which was a training ground for the Soviet troops, in the nearby forests he buried his victims. Their bones are being found even to this day.

Izaak Stolzman aka Zdzisław Kwaśniewski, in the late 1940s and early 50s, on the orders of the NKVD authorities, supervised and coordinated the criminal activity of public security offices at the county and municipal levels in Drawsko, Białogard, Szczecinek, Wałcz, Kołobrzeg, Połczyn, Jastrowie and Okonek. He also participated in the crimes of the Public Security Office in Gdańsk, Słupsk, Szczecin, Ustka, Koszalin and Elbląg.

This executioner deprived the prisoners of life by shooting, hanging, and gassing, like in the NKVD headquarters in Gdańsk, and by injecting poison, which was his specialty.

In 1947 Col. Isaac Stolzman became also well known to students of the gymnasium in Wałcz. On behalf of the Public Security Office he oversaw the case of establishing an illegal youth organization in the gymnasium under the leadership of Bogdan Szczucki.

The activity of this group consisted of taking down the communist flags hanging on the occasion of communist holidays, spreading leaflets, loud chanting: "Down with Communion !!!" or "Soviet Henchmen," etc. They tried to draw attention to the Stalinist crimes that, among others, Izaak Stolzman perpetrated on the defenseless population.

The actions of Izaak Stolzman aka Zdzisław Kwaśniewski were part of the Soviet operational groups in liquidating members of the Polish resistance movement against the Soviet occupation. These were Soviet counterintelligence groups operating in Poland, always and above all, by specially appointed agents. During the German occupation of Poland, the Soviet intelligence dropped thousands of Soviet agents to Poland, including Izaak Stolzman.

Their task was to identify people and establish a database about the Polish resistance movement in order to have addresses and names of people for liquidation after the entry of Soviet troops. They were called "hunters of AK heads."

In the role of a medical doctor, he settled in Białogard at ul. Bohaterów Stalingradu 10 (now Dworcowa).

He even transformed himself into a Catholic. This is documented in the marriage book in the parish church in Białogard, where he got married on February 6, 1954. The records show that Zdzisław Kwaśniewski, born on in 1921 in the USSR, married Aleksandra Pałasz, born on December 28, 1929 in Vilnius, a nurse by profession. From this marriage at the then Bohaterów Stalingradu Street No. 10, on November 15, 1954 Aleksander was born - future President of Poland and his sister Małgorzata Sylwia, about whom we know only that she is the director of the bank in Switzerland. Aleksander Kwasniewski does not say anything about her. In the local church of the Blessed Virgin Mary there are no baptism records for them. Most liekly they were not baptized.

Aleksander Kwaśniewski's father died in 1990 and was buried without publicity at the Jewish cemetery in Warsaw. His mother died in 1995 just before elections in which he was elected as President of Poland. She had a Catholic funeral at the Warsaw cemetery thanks to obtaining a certificate from the pastor of the parish church in Białogard. This fact Aleksander Kwaśniewski, without privacy, cleverly used in the presidential campaign to gain credibility as a Catholic.

Former head of the Security Office UB in Drawsko Pomorskie, Wacław Nowak, revealed that Zdzisław Kwaśniewski, the father of President Kwasniewski, was a Soviet war criminal guilty of crimes against the Polish nation. Wacław Nowak lived as a pensioner in Koszalin at ul. Powstańców Wielkopolskich 22. A few months before his death in 1994, he confessed that the UB and NKVD murdered the Home Army, NSZ, and Polish resistance fighters in West Pomerania in 1945, to which he himself contributed. Wacław Nowak conducted UB special operations in the area of ​​Drawsko, Czaplinek, Jastrowie, Połczyn, Białogard and Kołobrzeg.

He received orders directly from the NKVD branches in Gross-Born (Borne-Sulinowo), Białogard and Rawicz. He performed under the assumed name "Wacław Nowak" given to him by NKVD during his nomination as the head of the UB in Drawsko in 1945. His real name points to his Jewish lineage.

On the orders of NKVD, Wacław Nowak was hunting and persecuting soldiers of the Home Army, the National Armed Forces and anti-Soviet organizations hiding in the area under his supervision. He participated in the raids on groups of Vilnius soldiers from the 5th AK Brigade of Major Zygmunt Siendzielerz, aka "Łupaszka" (previously of the 4th Brigade), which moved to the forests of Western Pomerania. Once caught, they were sent to the NKVD concentration camp in Barkenbryge (Barkniewo) near Gross-Born Borne (Sulimowo). (Wacław Nowak knew only the German names of these towns.) It was a temporary camp. From there, there were only two options for the Home Army soldiers: either to Russia or to death pits.

The NKVD officer who supervised the criminal activity of the UB, including the crimes of Wacław Nowak, was Izaak Stolzman.

The AK men were murdered in the village of Doberlage located about 5 km north of Nadarzyc.
This village has been abandoned since then, even its name has come out of use. Only the ruins of the walls and foundations were left. Corpses were buried in the nearby forest. Some were covered with unexploded bombs, others with mines and soil.

Nowak remembered only three names of the murdered soldiers of the Home Army: Jerzy Łoziński, Stanisław Subotrowicz and Witold Milwid because they were interrogated the longest. UB men murdered them in Doberlage in the presence of Wacław Nowak and Izaak Stolzman.

Stolzman also prepared the political processes of the school youth. In Wałcz, he led to the conviction of Bogdan Szczucki, Marian Baśladyński and Feliks Stanisławski, and in Białogard he convicted Pszczółkowski and Tracz and sentenced them to prison and hard work in coal mines.

Wacław Nowak met Isaac Stolzman a few years later at the Białogard Security Office, but by then he was no longer called Stolzman. He changed his name to Zdzisław Kwaśniewski.