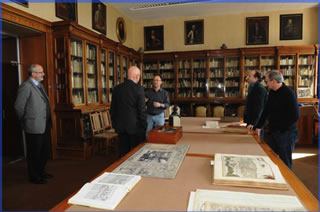 The head of the Israeli state archives, retiring Yaakov Lazovik, revealed in the center-left "Ha'aretz" that the Jewish state deliberately prevents historical research on the dark pages of its history by blocking access to archives. "It is unworthy of a democratic state," said Lazovik.

Dr Yaakov Lazovik. Ha'aretz: "Most of the contents of state archives have been closed and will never be made available," said Lazovik. He drew attention to the extremely rigorous historical policy of the state of Israel. According to him, the authorities effectively cut off scientists from the "basic raw material" of history. A small part of the "troublesome" archives, which may be theoretically revealed (after 50 years) "has been subjected to harsh restrictions, without any transparency and public control," says Lazovik.

He also revealed that many of the old documents are being concealed by the state under the pretext of "national security," although most of them are not related to security at all, but only to non-respect of human rights or to matters that "do not put Israel in a positive light."

"In democracy, you cannot hide information just because it is unpleasant. Democracies even forbid such concealment (...) because the basic democratic duty is the freedom of citizens to express their views on their representatives" - noted the head of the Israeli archives. He pointed out that the Israeli society somehow survived the fall of a false official version of history, according to which the Palestinians "simply fled" from many regions of their country during the war of 1948, whereas they in fact became victims of ethnic cleansing.

According to Lazovik, the Israelis committed a number of war crimes and Israel treated its Arab citizens in a way "contrary to democracy." "If Israel takes action that every court, here or abroad, would reject as wrong, citizens should know about it and decide whether they agree with it. Freedom of information is a necessary component of the democratic state," he told Ha'aretz.

Lazovik proposed restricting military censorship in managing state archives: "One can understand the necessity of censorship in certain circumstances, but allowing censors to decide in non-operational matters is unprecedented in democratic societies."