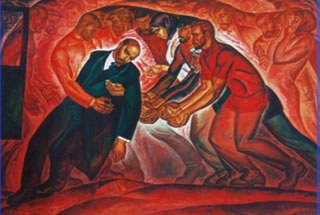 I have to cite Zagłoba’s words: “Well, gentlemen, prophesies are on my side!” Clearly, Maria Kiszczak (wife of a deceased communist dictator) must have followed her husband’s advice, who – in his final hours – must have told her: “Maria, when I’m gone, you will no longer be protected, thus you need to dispose of this compromising evidence if you don’t want to end up like the Jaroszewicz couple. Remember that only disposing of it in the public eye will allow you to live in peace for the rest of your life.”

Therefore, when Kiszczak’s widow passed on the communist files to the Institute of National Remembrance, I have publically announced that one team of graphologists will not be enough. There will be another one, even more independent than the first one, and should it not produce the results in favor of “the legend of Lech Wałęsa,” another one will follow, and so on, and so forth, until graphologists will be replaced by scribblers happy to preserve Wałęsa’s golden legend, so they themselves have something to believe in.

My prophesy has come true, as the former president has just announced that another team of graphologists is to be appointed. And soon a team of scribblers will take over the job. This is totally realistic, in particular because I suspect that Lech Wałęsa ceased to be SB (Polish communist security services) informant only to be passed onto the hands of military intelligence, which then did assume the task to make a dignitary out of him. It is worth mentioning that the “atheist left-wing,” i.e. former Stalinists like Bronisław Geremek or Jacek Kuroń, had their own “Walesa” in the person of Zbigniew Bujak, who fit perfectly a model of a working class leader. Apparently though, someone or rather SOMEONE managed to convince both Geremek and Kuroń to drop Bujak in favor of Wałęsa. Why would they need Bujak, who still needed coaching, when they had a fully finished product in the person of Wałęsa? A “faithful son of the church,” who always knew which side his bread was buttered, and – most importantly – would never bite the hand that fed him. Therefore, as part of preparations to the systemic transformation, the “atheist left-wing,” with the discreet help from the military intelligence, conducted a recruitment process in the underground, getting rid of any “extremists” in order to gain a full control – with “Kukuniek” as leader.

This is the very reason Michnik and Gazeta Wyborcza stubbornly defend “the legend of Lech Wałęsa,” not only against the obvious facts, but also against the contradicting statements about “Bolek” coming from Walesa himself, which makes the entire matter ridiculous. It is possible that Walesa’s contradicting statements are, in fact, the result of following instructions he received from his superiors in case his cover is blown – to make up numerous, more and more far-fetched explanations which will finally make the public confused and fed up with the exposed revelations. It is hard to say what is worse – Wałęsa acting on his own accord, or Wałęsa following instructions, because if he is following instructions, how can we be sure he does not follow instructions when it comes to any other aspects of his activity? Michnik defends “the legend of Lech Wałęsa,” because his own legend, as well as legends of other “founding fathers of the Third Polish People’s Republic,” is as fragile as a house of cards. Removing one card would cause a total collapse of the myth.

It is not only about the unfortunate “legends.” The most important aim of “the legend of Lech Wałęsa” and other similar legends of less known individuals, is to justify the occupation of our country by security services with communist links, the so called “third generation of the UB.” (UB – Stalinist Ministry of Public Security). The legends are to convince everyone that the birth of the Third Polish People’s Republic is authentic, and not just a farce. It is in interests of many scoundrels, who profit from Poland being occupied by the “third generation of UB,” but also of those, who gain nothing financially from it, but simply want things to look right on the surface. As per Zofia Nałkowska’s novel, where a stupid general looking at the audience at the horse races, says: “Democracy, aristocracy, order!”

“There are no coincidences, there are just signals,” according to the late presbyter Bronisław Bozowski. Therefore, it is no coincidence that as the defense of “the legend of Lech Wałęsa” intensifies, including even a herd of celebrities, more and more villains intensify their campaign to slander and discredit the Cursed but Enduring Soldiers, calling them criminals and bandits. Soldiers, who, against all odds, remained loyal to Poland to the end, and paid the ultimate prize with their lives for that eternal loyalty. They were murdered by occupants, their memory wiped out and obliterated, so that the future generations would never learn about their heroism.