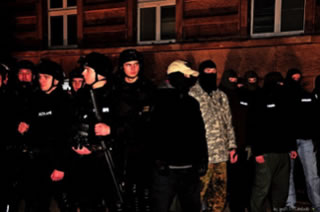 Without exception, all Polish Independence Day marches have been peaceful and dignified. I still recall the endless crowd, consisting of elderly people, teenagers, as well as children, walking through Aleje Ujazdowskie in dignified silence, carrying the white-red flags and patriotic banners back in 2012. Those people were not aware that on a parallel street, a media circus was taking place, which involved using batons, pepper sprays and water cannons,.

Such disruptions to annual peaceful celebrations of Independence Day have been caused in the recent years by provocation groups employing individuals wearing balaclavas, many of whom turned out to be policemen in civilian clothing, or the radical left Antifa invited to Poland by “Krytyka Polityczna” connected with post-communist forces.

A conversation secretly recorded at a restaurant revealed how the ruling Civic Platform’s politicians discussed the plot to set ablaze a security booth in front of the Russian embassy during the Independence Day celebrations in order to discredit the opposition. The instigators of this event later turned out to be supporters of the Civic Platform. The tape revealed to the public the brutal and ruthless fight of the Civic Platform against the opposition at the expense of raison d’ etat.

This year, the year in which the opposition took power, no one set the mainstream media’s production trucks on fire, no one plotted a counter-march manifestation, and no one threw stones at the police. Clearly, there was no center of power to coordinate provocations against the peaceful celebration of the Independence Day; and no official instructions were issued to do so.

I dare to say that this year’s march was no different than the previous ones. However, the circumstances have changed dramatically. The government and state institutions are about to be transferred into the hands of the opposition. With this change, there is no centre of power capable of ordering to rebel and instigate riots to discredit further the opposition. The German radical left is busy defending Muslim migrants from the revival of Nazism and had no time or courage to fight against Warsaw’s “Nazis” celebrating Poland’s Independence Day.

These circumstances enabled hundreds of thousands of Polish people to march through the capital’s streets in dignity and peaceful joy. Any man wearing a balaclava must have felt really awkward in that crowd, and was as anonymous as the well known African American CIA agent, on an undercover mission among the Eskimo… 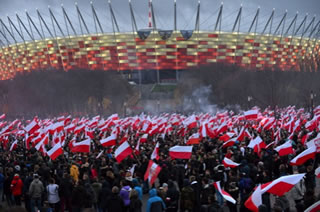 The change is coming and that is comforting. The only thing that spoiled this year’s parade celebrating the rebirth of Poland were the pathetic comments by the mainstream media commentators. I switched the TV off. We have no need any more for media propagandists. Their mission failed. They will not succeed in turning Warsaw into another Moscow or Brussels. Adieu!

The caravans move on…