Prof. Szczerski: Germany and Russia are not driven to empower Central Europe. They want to dominate us. And that’s considered a fair game. 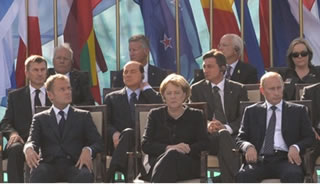 Who could forget Putin’s 2009 speech at Westerplatte in commemorating WWII?

In it, he emphasized that Europe must remember the victims and said: “Without fully understanding what had taken place we would never be able to build a safe world.” He added that, “German-Russian relations founded on a partnership and cooperation rather than historical quarrels are the key to healthy agreements.” What can we infer from Putin’s remarks back in 2009?

Professor Krzysztof Szczerski, a parliamentary representative of the Law and Justice Party and former Deputy Minister of Foreign Affairs: Let’s point out some very essential parts of his speech. In Westerplatte it was revealed that both countries which acted as aggressors in WWII and jointly invaded Poland were determined to change the historical narrative. Uncomfortable with being labeled as aggressors of WWII, both Germans and Russians were bent on chiseling away at the historical truth the way they saw it fit. Both countries jointly concluded that their common enemy is WWII. Thus it became necessary to blend, dilute and blur the lines between the war’s victims and aggressors. This was a common interest for Moscow and Berlin. They also needed to find a way to justify their actions.

Well, take a look at the northern pipeline and many other similar investments being made by both countries. This sort of cooperation by two powerful nations hardly ever goes unnoticed. In this case, it has been bringing up bad memories, which always ended badly for Europe. Therefore, fears and concerns soon followed. That is exactly why Putin stressed his envisioning of a Europe without divisions, so that close cooperation between Russia and Germany would not be perceived as a repetition of past events but a new step forward. Finally, it’s worth noting what Putin allured to right after the annexation of Crimea. It turns out that the reunification of Germany in 1990 and Moscow’s compliance towards that process had a bit of a catch.

Does that mean that Russia already had a plan in regards to the transformation of Europe?

Russia was not very supportive of the reunification of Germany as one would think. A Europe without any sort of divisions was not exactly what Moscow had in mind. Nevertheless Moscow waited for the right moment to use these sudden changes that of course affected Russia, as leverage in negotiations with the West. With potential geopolitical changes ready to occur in the coming future, Russia wants to have a seat at the main table with Germany’s unconditional support at its disposal.

Obviously, Russians have never been shy to court Germany and have been building up an ever stronger position in Germany. Has Moscow secured a tight grip on Berlin yet?

German-Russian relations are founded on mutual respect. Both governments are aware that they are powerful nations worthy of each other’s cooperation and presence, and even rivalry for that matter. At any given point on our historical timeline, both countries have always attempted to conquer one another. Germany constantly aspired to subdue Russia. Russia on the other hand is eager to finally have the upper hand in this love/hate relationship instead of the other way around. Such relationship means that there is plenty of room for cooperation between them. However, the longer they cooperate the greater the possibility that partnership seeps into the territory of armed conflicts.

So there’s a possibility that Germany will offer a helping hand in Putin’s aggressive foreign policy today?

I’m really hoping it does not come to that because such strategic cooperation between Moscow and Berlin always ended in a disaster, especially for Poland. Let’s hope that the way in which all of this is evolving Germany will simply decide to stand up to Russia when it comes to its imperialistic goals. Nevertheless, when that happens Germany will be doing it for the sake of its own interests rather than for the good of Europe. By that I mean they will undertake this challenge to gain total hegemony over Eastern Europe, with Russia out of the picture. And what better way to start than by pulling Ukraine right from under Moscow’s feet.

How does Poland fit into this picture?

Whatever the ambitions and plans are we can be sure that Poland will be the last to find out. Whether we will be looking at a mutual and peaceful agreement regarding Europe or a complete dismantling by its top players or even a tug of war over Eastern Europe, simply it does not matter. It’s all bad news no matter how one looks at it. What’s worse is that neither side considers Poland a formidable negotiating partner. When you’re the prize you don’t get to have a say in the decision-making, and for Russia and Germany, that’s a fair game. After all, neither of them wants a sovereign Central Europe. This is yet another thing that Berlin and Moscow can agree on.