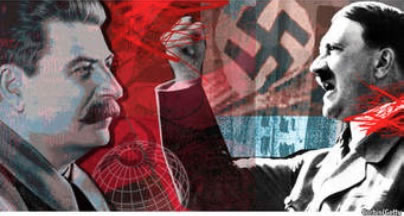 Eastern and Central European countries are deeply concerned over the recent military and political acts of aggression by Russia towards its European neighbors. The region is alarmed by the violations of territorial integrity of the sovereign states and the impudence of the information warfare conducted by Russia worldwide.

The hybrid war conducted by Russia includes such provocative acts as recent attempts by President Putin to justify the Ribbentrop-Molotov Pact of August 23, 1939 pursuant to which Nazi Germany and the Soviet Union secretly agreed to “a territorial and political rearrangement of the areas belonging to the Polish state” and a decision as to “whether the interests of both parties make desirable the maintenance of an independent Polish state and how such a state should be bounded” was to be made by the two aggressors. The German-Soviet Pact led to joint German-Soviet aggression on the sovereign Polish State. Concluding the German-Russian Boundary and Friendship Treaty of September 28, 1939, the two invaders divided Poland between themselves and agreed to cooperate in “combating Polish resistance.” The Gestapo-NKVD collaboration in exterminating the Polish people was formalized as follow: “Both parties will tolerate in their territories no Polish agitation which affects the territories of the other party. They will suppress in their territories all beginnings of such agitation and inform each other concerning suitable measures for this purpose.” Those treacherous secret pacts led to the unprecedented genocide committed on the Polish people by Germany and the Soviet Union working hand in hand between September 1939 and June of 1941.

While many crimes committed by the Nazi regime have been disclosed, adjudicated and condemned, most crimes committed by the Soviet regime have not been disclosed to this day and were never properly understood, adjudicated and condemned by the international community. To this day, no justice has been served for the Katyn crime considered as one of the greatest genocidal crimes of WWII, Augustów mass murder, or brutal persecutions of the Polish civilian population. To this day many burial locations of Polish victims of the Soviet oppression remain unknown. According to the assessment of the Russian Memorial, there could be as many as 800 locations of mass graves of the Polish nationals murdered by NKVD throughout the Soviet Union during World War II, most of them still unknown.

Today’s Russia attempts to justify and even glorify the criminal Ribbentrop-Molotov Pact that led to WWII and brought death to millions of people of Central and Eastern Europe. Today’s Russia once again reaches out to Germany and uses all types of weapon including historical propaganda to regain its domination over the region that Timothy Snyder famously called “bloodlands.” Today’s Russia not only denies the Soviet historic responsibility for the crimes of WWII, but even attempts to justify these crimes, including 1939 invasion of Poland and annexation of half of her territory, the Katyn genocide, or the occupation and annexation of the Baltic States, just to name some of the Soviet unpunished international crimes.

In light of the traumatic experience of the Polish people who were subjected to coordinated mass extermination by both German and Soviet regimes as a result of the German-Soviet Pact of August 23, 1939, the recent statement of the Russian President that “there is nothing wrong with the Ribbentrop-Molotov Pact” is not only offensive but very dangerous to the world peace and security. Such statement sends a message that criminal practices symbolized by the Ribbentrop-Molotov Pact can be acceptable and may be repeated.

In recognition of this danger, the newly elected President of Poland Andrzej Duda for the first international trip chose Estonia. Together with the President of Estonia he paid respect to the victims of German-Soviet totalitarianism on the 76st anniversary of the Ribbentrop-Molotov Pact. Thus, Poland and Estonia are sending a joint warning on behalf of more than one hundred million people of Eastern and Central Europe to the world community that the criminal partition and brutal occupation of Eastern and Central Europe symbolized by the Ribbentrop-Molotov Pact must be condemned once and for all.

The Polish American community appeals to the American people to condemn in unequivocal terms the Russian attempt to justify and rehabilitate the criminal Ribbentrop-Molotov Pact that led to the mass extermination of millions of people in Central and Eastern Europe. The lessons of Poland’s tragic past must not be forgotten. We shall honor the victims of the Soviet oppression, condemn the perpetrators, and lay the foundation for reconciliation based on truth, respect and remembrance.

Accordingly, we urge the United States Congress to designate August 23 as “Black Ribbon Day” to never forget the Soviet terror experienced by millions of people of Central and Eastern Europe in the XX Century. We must remember and learn from the experience of the people subjected to the Soviet ruthless military, economic, and political repression through mass exterminations, arbitrary executions, mass arrests, deportations, the suppression of free speech, confiscation of property, intimidation, humiliation, and destruction of cultural and moral identity of the conquered societies, all of which deprived the vast majority of the peoples of Central and Eastern Europe of their basic human rights and dignity. We must ensure that this cruel history never repeats itself.

Those who are tempted to invoke real politics to justify Putin position on Ribbentrop-Molotov Pact that led to the Russo-German genocide committed in the bloodlands in the XX century shall be mindful that the people of this region consider such statements as incitement to commit serious international crimes.

The author is Vice President for Polish Affairs of the Polish American Congress.
Photo: img.morgenpost.de