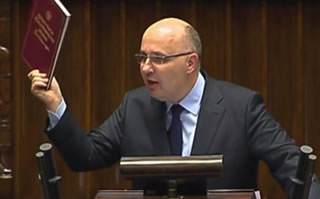 The propaganda of an alleged coup d’état by a democratically elected PIS government revealed two truths: The first truth is that the PO-PSL coalition that lost elections de facto served as an occupation government in "a theoretical State," primarily satisfying the interests of Berlin and Brussels. The second truth is that it was the PO-PSL coalition that attempted the coup d’état on the PIS government.

Their role in the attack on the Polish government was revealed by Charles Crawford, former British ambassador to Poland who observed in "The Guardian" that the accusations were leveled at the government of Law and Justice because the "European elites have been forced to bow to the former (PO-PSL) government and their cronies in the media." It is worth noting that Crawford could hardly be regarded as a supporter Law and Justice since he worked closely with Radosław “Radek” Sikorski when serving as British Ambassador to Poland. Later, he even wrote a speech for Sikorski.

Information on the imposition on Polish of the control procedures for the rule of law was issued on 12 January 2016. The deputy head of the European Commission, Frans Timmermans, revealed that the Polish Commissioner Bieńkowska also supported the decision to subject Poland to the control measures. Commissioner Bieńkowska served as deputy prime minister in the Tusk government. In a secretly recorded conversation, Bieńkowska revealed irregularities in the distribution of EU funds in the health care sector. In the presence of tree other people, she stated that she would use the results of the 2011 audit in order to make sure that everything would "work out well," she is heard saying. "I know how it is, we did the audit to assure the right results. The results are bad, but these are hundreds of millions of zloty," she admits. In other words the PO-PSL coalition under her watch defrauded hundreds of millions of European funds, which were supposed to go to health care.

Moreover, I believe that the Polish government should draw up a White Paper of crimes committed by the PO-PSL coalition, particularly with regard to violations of the rule of law. But not only with respect to state institutions but also in relation to matters of individual citizens affected by repression of the dysfunctional justice system. These are thousands of cases! All these violations of the rule of law should be sent to Brussels in connection with the fact that the former occupational authorities do not intend to stop instigating his superiors in Brussels and Berlin to overthrow the legitimate Polish government.

After the announcement by Commissioner Timmermans of the imposition of control on Poland, PO deputy Trzaskowski threatened anti-government actions in Brussels and probably in Berlin: "We do not give up the right to criticize the Polish government. We will criticize the Polish government also in the European Parliament." PO deputy Schetyna also announced that he will support a complaint against Poland. In this situation, the government should immediately disclose in Brussels all the information regarding wiretaps operation against journalists during the reign of the PO -PSL rule, and the EU Parliament should set up a committee of inquiry on illegal wiretaps by the PO/PSL government.

The impudence of the rebels from PO is evidenced by the fact that they delegated to the first line of attack on PIS deputy Kropiwnicki whom they should hide deep and long. Kropiwnicki has just been seen on TVP Info slickly talking about violations of the Constitution by PIS in connection with the selection of five judges of the Constitutional Tribunal. Therefore, it is necessary to recall the speech that Mr Kropiwnicki gave on May 26, 2015 in the Sejm, so that anybody who talks with him in the future could read this text straight into his eyes before attempting to discuss any other topic. Here is the statement of deputy Kropiwnicki calling for the violation of the Constitution when speaking as deputy rapporteur of the Civic Platform:

"Well, after the analysis, we concluded that due to the imminent end of the term of the Sejm, there is a high risk that a significant part of the Tribunal, as many as 1/3 of the judges will lose their mandate at the end of the term, that is after finishing now, and before the actual start of the new work. We decided therefore that it is better not to block the work of the tribunal, but also not to add responsibilities in the new term so that on the first, second or third meeting, when a new government is selected, a parliamentary majority is formed do not add to this crucible of events the election of five judges of the Constitutional Tribunal. Such situation could block the functioning of the Tribunal for a long time. To prevent this from happening, we decided that it was better to introduce a transitional provision, which will apply only to those judges whose term of office ends in 2015 - and here is the important point - so that the five judges could be chosen still during this congressional term."

To make it clear, the five judges had to be chosen by the new Parliament because parliamentary elections were held on October 25, 2015 and on that day the Polish people decided that from that date on the Civic Platform should not decide on their fate. Meanwhile the term of three judges expired in November while the remaining two judges in December 2015, hence after the elections. It is worth pointing out that in the 26 years of so-called “independent” Poland the Parliament never dared to act on behalf of the next Parliament. The assassins from PO and the supervisors of their “theoretical state” who will come to Poland to control our compliance with the rule of law should be reminded of those facts all the time.

PIS cannot yield to the pressures of supervisors from Brussels - as Moscow tried to break the "Solidarity" after the August 1981 political earthquake. This is what the former occupation authorities count on with their successors - modern defenders of Western banks and corporations who dream about the implementation in Poland of "European values."

A discussion is needed on legislation aimed at legalizing civil unions in Poland – recently said in parliament a representative of NGOs during the public consultation organized by the club LGBT. The event was attended by representatives of organizations fighting for LGBT people, including representatives of the Campaign Against Homophobia and Anna Grodzka, who said that a good solution would be to introduce as soon as possible a draft law on this subject in the Parliament.

Such laws submitted by Nowoczesna.pl the “progressive” Europe will welcome with joy. The idea is to force PIS to adopt it under the control procedure and assure the observance of "European values," meaning under what is known as liberal democracy, in Polish - demokracja socjalistyczna…