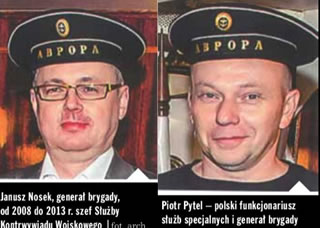 As reported by niezalezna.pl, the Expert Center for Counterintelligence in Poland has been accredited by NATO. The Center’s will deliver programs to improve NATO counterintelligence, such as recognition and definition of new events and threats, and delivery of new training methods to deal with rare security threats.

The Polish Center is one of 22 of NATO centers providing such training. Last year, Mariusz Marasek was designated as the Commissioner of the Center by the Polish Ministry of Defense (MON).

The MON announced that the court rejected the complaint filed by the former Commissioner General Piotr Pytel. The court upheld the prosecution’s decision to close the investigation into the lack of appropriate permissions by soldiers of the Gendarmerie, who took part in the operation to enter the NATO Expert Center for Counterintelligence. The court decision confirmed that the operations led by Bartłomiej Misiewicz of MON were legal.

On December 18, 2015, MON made changes to the management of NATO Expert Center for Counterintelligence, using forces led by Misiewicz of MON, officers of Military Counterintelligence Service (SKW), and soldiers of Military Gendarmerie. As Misiewicz said at the time, when the MON accessed the offices occupied by the management of the Expert Center for Counterintelligence, documentation of various confidentiality levels was discovered. Since the Center was not authorized to possess such documentation, everything was secured and transferred to the SKW.

The investigation into disclosing confidential data by officers who worked at the NATO Expert Center for Counterintelligence has continued since January 2016. The investigation was launched following claims by Bartłomiej Misiewicz and Piotr Bączek, head of the SKW. The maximum sentence for negligence or breach of duties by public officials is three year prison term.

“The Warsaw Military Court rejected former Commissioner General Piotr Pytel’s claim, thereby upheld District Prosecution’s verdict from October 24, 2016 to close the investigation into the legality of the action taken by the soldiers of Military Gendarmerie, who assisted in operations led by the MON Commissioner to NATO Expert Center for Counterintelligence Bartłomiej Misiewicz. The court decision confirmed that operations led by Misiewicz were legal,” MON emphasized.

In the meantime, General Piotr Pytel was a guest on Monika Olejnik’s television show broadcast by TVN24. The prosecution charged General Piotr Pytel with illegal collaboration with the FSB (Russian Federal Security Service). The former head of SKW used Olejnik’s show to attack MON and Defense Minister Antoni Macierewicz, claiming that actions against him from December 2015 at the NATO Expert Center for Counterintelligence were personal. However, Pytel failed to mention his visit to Saint Petersburg to see the “Aurora” cruiser, where he happily walked around wearing a deckhand’s hat.

Pytel complained to Olejnik about the way he was treated when he was dismissed from service. “It was a grotesque and ridiculous situation. I was summoned to the Director of MON. As soon as I approached the stairs, the receptionist directed me to the spokesman’s office instead, where I was offered a tiny chair to sit and wait. I waited for several minutes, when the door opened and Mr. Misiewicz appeared […] He invited me in and handed me my resignation. I had, of course, resigned prior to that, but I simply followed procedures. Upon receipt of the resignation, Mr. Misiewicz told me to stay at home and wait for Mr. Bączek’s orders.”

His statement caused havoc in the media.

“Piotr Pytel talks about the officer’s dignity. Let me remind you of this dignified photo of the SKW Director, there is a lot to say about it,” wrote Michał Rachoń on Twitter, publishing Pytel’s photo in a deckhand’s hat from the visit to “Aurora.”
When interviewed by Olejnik, General Pytel said he was offered “immunity” by a PiS (Polish Law and Justice Party) politician if he stops to “build a case against Macierewicz.” The former head of SKW assured he had no idea about any such case against Macierewicz, but he expressed opinion that this was the reason why the MON representatives searched the NATO Expert Center for Counterintelligence in December 2015.

Commenting on the MON announcement about the NATO Expert Center for Counterintelligence being used to store evidence of collaboration with the FSB, as well as some materials regarding the Smolensk crash, General Pytel claimed that it was not the case. “It is a lie,” said Pytel, “there was no documentation of that kind at the Center.”

MON informed that MON Commissioner Bartłomiej Misiewicz and officers from SKW and Military Gendarmerie, at Defense Minister’s request, stopped the attempts to use the NATO Expert Center for Counterintelligence as accessory to criminal activity by a group of former SKW officers appointed during the Civic Platform’s administration. MON announced that the actions taken by its Commissioner Misiewicz were legal and lawful.

“Officers in question stole confidential documentation and failed to store it in accordance with the confidential data protection act. The officers also gathered some documents relate to their collaboration with the Russian FSB, as well as to the Smolensk crash. These illegal activities were conducted under the guise of establishing the NATO Expert Center for Counterintelligence, which was not yet accredited at the time, and were based in offices deemed inadequate for this institution’s purpose,” MON said.

MON informed that “it conducts an investigation with regards to the breach of confidentiality and illegal collection of confidential documentation, while the prosecution office pressed criminal charges against former officers General Pytel and Colonel Dusza for collaboration with the FSB.”

Back in December 2016, reporters of niezalezna.pl revealed shocking news about the Polish intelligence’s illegal collaboration with the Russian FSB.

As published by Gazeta Polska, the former head of SKW, Piotr Pytel and head of his office, Krzysztof Dusza, met W.J., a Russian intelligence officer, a number of times during their service at the SKW. The meetings took place when Pytel was SKW’s operations manager, at the time when General Janusz Nosek was the Director of the SKW. One of the meetings took place in the village of Ułowo, near the border with Kaliningrad Oblast.

Unofficially, the contact between SKW and Russian intelligence was established in March 2008.

“As a result of operations by the counterintelligence of Internal Security Agency (ABW), conducted back in 2014, a high level of activity of the Russian intelligence in Poland was confirmed. Russian citizens tried to use their wide contacts in politics, including the E.U. politicians, to influence Polish position regarding matters that were crucial for Russian interests,” states the ABW 2014 Operations Report.


Back in March 2016, niezalezna.pl reported on the actions at the NATO Expert Center for Counterintelligence and the scandalous photos of SKW officers (including SKW high-rank management staff Piotr Pytel and Janusz Nosek), who proudly posed wearing deckhands’ hats during their visit to see the “Aurora” cruiser.

As commonly known, on December 18, 2015, following the Minister of Defense order, the offices of NATO Expert Center for Counterintelligence have been searched, having been occupied illegally by the former Director of SKW and his deputy. To the surprise of Misiewicz group that searched the Center’s offices, the former bosses of SKW – responsible for security of military forces – stored numerous confidential documents in a shoe cupboard.

The office was decorated with the symbol of the Russian FSB displayed on the wall and contained passes to Sejm, Prime Minister’s office and National Security Bureau, as well as several dozen bottles of brand-name alcohol, most of them opened. More shockingly, photos from the former SKW directors’ visit to Moscow on April 12, 2012, were found in the office. The photos, initially formal, show the directors in friendly embraces with their Russian counterparts. Negotiations must have been successful and were celebrated with a walk around sunny Moscow’s Red Square and other tourist attractions.

That might have been the day when the deal was made to allow the FSB to infiltrate the Polish SKW. The deal was faithfully kept in effect by the Polish side until the end of PO-PSL coalition (PO – Civic Platform, PSL – Polish People’s Party), despite the Russian aggression on Ukraine and the total lack of any cooperation in the Smolensk investigation. More photos were discovered from SKW directors’ visit to Saint Petersburg between September 10 and 13, 2013 where the SKW officers, including Piotr Pytel and Janusz Nosek, are seen posing in deckhands’ hats when visiting the “Aurora” cruiser. The officers looked clearly pleased in the photos.

Is there any wonder? It was “Aurora,” after all, that gave signal to commence the October Revolution.