A crime against Poland has been committed.
Crushing legal opinions on blocking the Sejm 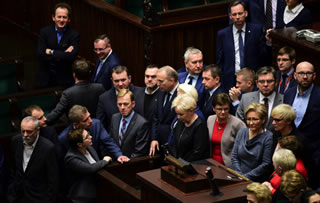 “There is a strong probability that the Code of Conduct for MPs has been violated on numerous occasions during the Sejm sessions, and crimes against the Polish State and its government institutions have been committed,” states a legal opinion issued by the Sejm Analysis Bureau regarding the MPs conduct during the Sejm’s 33rd session on December 16, 2016, and thereafter.

Several legal opinions on the parliamentary crisis published by wPolityce.pl unequivocally state that the actions of the opposition MPs, which included interrupting the parliamentary session, blocking Sejm’s works, and occupying the Parliament, are improper and should be formally investigated by appropriate bodies of the Sejm and Prosecution. At the same time, the action taken by the Sejm’s Marshal, who decided to transfer the session to another location, i.e. Sala Kolumnowa, was legal. Voting that took place in the Sala Kolumnowa due to the blockage of the main assembly hall was legal and its outcome is binding.

As held by the Supreme Court of Poland years ago, an MP who is elected by the Nation and entrusted with a mandate on its behalf, is obliged to fulfil the mandate in just and fair manner, which does not violate the public’s trust in the MP. The mandate cannot be used in order to encourage or participate in acts of violence, or to publicly call for violation of the law of the land. The Sejm Bureau’s opinion states that “the record of the Sejm’s session from December 16, 2016, as well as commonly known events that followed it (acts of violence) provide sufficient grounds for a formal investigation by appropriate bodies of the Sejm and Prosecution, pursuant to the rules and regulations discussed in this opinion.”

“There is a strong probability that the Code of Conduct for MPs has been violated on numerous occasions in the Sejm Main Assembly Hall, and that crimes against the Polish State and its governing institutions have been committed,” emphasized the lawyers and stress that: “There is no doubt that in the main Sejm’s Assembly Hall illegal acts of violence had been committed. These acts meet the criminal law criteria.”

The Sejm Bureau identified the following acts committed by some opposition MPs, which should be investigated.

The Sejm Bureau’s lawyers point out that the basic responsibilities of MPs include participation in voting and obeying the Sejm’s Marshal’s orders, as per Sejm’s Regulations.

It is beyond any doubt that in terms of criminal law the blocking and occupying the speaking platform in the Parliament and the Marshal’s chair constituted acts of violence that prevented the orderly conduct of the Sejm business and precludes it from fulfilling its tasks. As such, it represents an unprecedented assault, which violates the Polish parliamentary culture, as well as democratic parliamentary tradition and customs.

“Considering that the oath of the MPs is determined by the Constitution itself, there is no doubt that the conduct of some MPs’ during the Sejm’s 33rd session was in fact a violation of the Polish Constitution,” emphasized prof. Wyrembak.
To restore order in the Parliament, the Sejm’s Marshal should take one of several actions recommended by the Sejm Bureau’s legal team in order to assure order in the Parliament.

The selection of the most appropriate remedy is obviously up to the Marshal of the Sejm. The implementation of any of the recommended actions, including the mobilization of the Marshal Guard, can be considered as legal and justified under the circumstances. There is no doubt that blocking and occupying the speaking podium and the chair of the Marshal constitute –according to the law – illegal acts of force that prevent the proper conduct of business by the Sejm and its organs. As such, it constitutes the act of unprecedented assault on the Constitution of the Republic of Poland.

Prof. Wyrembak lists several methods to overcome the obstruction of democratic process in the Sejm that should be considered by the Sejm’s Marshal. As per Sejm Regulations, there are several methods the Marshal of the Sejm can restore the order:

1. Engage the Senior Convention (a body ensuring cooperation of parliamentary clubs with respect to Sejm’s activity);
2. Attempt to mediate;
3. Temporary transfer of the parliamentary session to a different room;
4. Take all actions necessary to take legal measures towards MPs for inappropriate and violent conduct, on the ethical grounds, disciplinary basis, civil law basis (in particular relating to liability for potential torts and damages resulting from the necessity to move the Sejm’s session to another location), and criminal law basis.
5. Call on the Marshal’s Guard to take appropriate action.

The lawyers analyzed the Sejm session from December 16, 2016 and the actions taken by some opposition MPs, which led to the interruption of the session. They also assessed the Sejm’s Marshal’s decision to transfer the session to the Sala Kolumnowa.
“The continuation of the Sejm’s 33rd session in the Sala Kolumnowa was fully compliant with the Polish Constitution and Sejm Regulations,” prof. Bogusław Banaszak stated in his opinion for the Sejm Bureau.

Prof. Banaszak also pointed out that the Marshal’s responsibility is to preserve the prestige of the Sejm and keep the Sejm session in order. Thus, in face of the circumstances of December 16, he was obliged to undertake appropriate steps to assure the continuation of the parliamentary session.

“During the Sejm’s 33rd session, a group of MPs took actions that should have never be taken during the Sejm’s sessions. Speeches by some of the MPs sidetracked the discussion on the budget, focusing instead on other issues, including media regulations. Therefore, the MPs in question violated the order of the parliamentary session, as per the Sejm’s Regulations. Moreover, their actions were conducted in a demonstrative manner not appropriate for the parliamentary session, such as occupying the speaking platform. Article 7 of the Sejm’s Regulations states clearly what the conduct of MP should be during the session. Actions like blocking of the speaking platform or other places at the Sejm Assembly Hall by a number of MPs at the same time, is in contravention of the Sejm Regulations,” stressed prof. Banaszak. He also urged that “MPs, who were not happy with some of the actions taken by the Sejm’s Marshal, might protest by means stipulated in the Sejm’s Regulations, but once those means are exhausted, they are obliged to comply with Marshal’s decisions.”
Banaszak added that “neither the Constitution, nor the Sejm’s Regulations stipulate the venue of the session,” and that on previous occasions the Sejm sessions took place in the Sala Kolumnowa.

Indeed, the 73rd session of the Sejm’s fourth term, which took place on August 12, 2010, was conducted in the Sala Kolumnowa following the decision by George Schetyna, Sejm Marshal at the time, to change the venue due to issues with the Assembly Hall. Therefore, it became a customary norm to conduct parliamentary sessions in rooms other than the Assembly Hall, within the Sejm complex. “M. Kuchciński, the current Marshal of the Sejm, simply followed the norm implemented by his predecessor (who led the opposition to block the Assembly Hall). By moving the deliberations to another location, the Marshal fulfilled his constitutional duty of leading the session, which includes, among other matters, designating the venue in the event it is impossible to carry out the session in the Assembly Hall,” said prof. Banaszak. He did not find any shortcomings or procedural violations in conducting the parliamentary session of December 16, 2016, in the Sala Kolumnowa.

His view is shared by Dr. Hab. Paweł Sobczyk, a professor of law and administration at the Opole University.

“There is no designated session room in the Sejm Regulations. It can be assumed that in exceptional circumstances, and such were present in this case due to the actions of some opposition MPs, the session can be conducted in a room different than the one commonly known as the session room,” he stated.

According to Article 188, par. 3 of the Sejm Regulations, in the event it would not be possible to use the vote counting device, the Sejm’s Marshal has the right to request voting by raising hand and such votes to be counted by the secretaries. “Therefore, the Marshal’s decision regarding the voting has to be deemed compliant with the valid regulations,” added Sobczak.

He also emphasized that the opposition’s doubts regarding the quorum should have been expressed in a manner stated in the Regulations. “The Marshal of the Sejm is not able to hear and verify every single sentence, opinion, thesis and conclusion expressed during a session, regardless which room is being used,” he stressed.

Prof. Banaszek added that the quorum, necessary for the voting to be valid, cannot be confirmed solely based on the attendance list. “It can be confirmed by the number of MPs who took part in the voting,” he explained. The secretaries counted and verified the votes taken in the Sala Kolumnowa.

“The request by Jacek Sasin, MP, fulfils the formal requirements, therefore it is to be considered by the Sejm,” he stated and elaborated further: “In the past, the Sejm did reject amendments en bloc to the budget law. Such voting took place in December 2012 when all 5899 amendments submitted by the Palikot Movement were rejected. Such bloc voting of submitted amendments has not concerned the jurisprudence.

According to the opinion presented by the Sejm Bureau, it is clear that the voting outcomes are final and beyond discussion. “There is no possibility of repeating the voting,” states prof. Banaszak. He also refutes complaints on violation of the transparency of the session. “The session’s transparency was assured by the Sejm’s cameras recording. This method assured the public character of the session, as each of its parts was transmitted and can be replayed. Additionally, the course of the session can be reconstructed based on transcripts and published protocols,” he said.