The Counterbalance to Brussels is developing in Central Europe,” said Jarosław Kaczyński 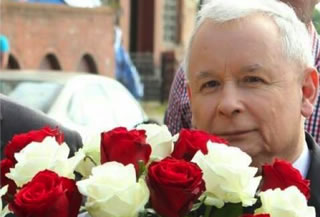 There is a serious indication that a significant counterbalance to Brussels is developing in Central-Eastern Europe - said Chairman of the governing Law and Justice (PIS) party, Jarosław Kaczyński, in his interview with the Hungarian weekly Heti Valasz.

When asked whether there is a group of states – including the Visegrad Group and other countries stretching from the Baltic to Adriatic Sea – that is able to develop a counterbalance to the current leadership of the E.U., Jarosław Kaczyński replied: “There are some serious indications of such a counterbalance being formed.”

Numerous, complex projects have been developed within Central-Eastern Europe, such as building the energy independence for the countries of the Baltic, Black Sea and Adriatic Sea regions, or the already active 16+1 initiative, which is basically an agreement between the countries of Central-Easter Europe and Beijing - said Jarosław Kaczyński.

He assessed that these projects have already formed a certain counterbalance to the “strive for full hegemony in Europe.”

When asked whether President Duda’s initiative of Intermarium cooperation is not going to “dilute” the Visegrad Group, Kaczyński replied: “If we were to aim at such a broad cooperation as within the Visegrad Group, we would experience problems. However, we have only one mutual goal: to secure the energy supply, including gas and oil import, which would increase the number of exporters (to the region). It is also about proper linking of the already existing gas and oil pipelines.”

Kaczyński added that the U.S. would join the list of gas and oil suppliers, since President Donald Trump wants to authorize such export.

“Undoubtedly, the idea of Visegrad Group’s institutionalization has to be discussed with Robert Fico, the Slovakian Prime Minister,” stated Kaczyński, emphasizing that Slovakian presidency in the European Union has concluded on December 31, 2016.

Kaczyński also declared that Poland would do whatever it takes in order to prevent Brussels from forcing the member states to settle immigrants. When asked whether he thinks this would be the first step to transform the region into a political entity, he said: “Should the Visegrad Group succeed in the migration matter, it would, indeed, be an important step forward for our region to have its say as a political entity. It would be also a success from the point of view of the entire Europe.

Kaczyński was also asked whether the difference in attitudes towards Russia between Poland and Hungary could threaten the Warsaw-Budapest relation. “We don’t consider it an issue, and our relation with Hungary continues to improve. Maintaining a good relation with Russia is not something to be condemned. After all, the Polish geo-strategic situation, and our historical experience differs from the Hungarian,” said Kaczyński.

Kaczyński stressed that loyalty is the most important in mutual relations, and that “Hungary is loyal to its allies, when needed.” As an example, he pointed out that the Hungarian Prime Minister, Viktor Orban, supported the extension of sanctions against Russia as well as the Polish stance on carbon dioxide emission.

Jarosław Kaczyński also stated that there is a need for decisions that will strengthen the Polish-Hungarian cooperation in the Visegrad Group, such as the newly launched radio program about the Visegrad Group.

“What is needed is the emergence of influential companies, significant within Europe, an integrated infrastructure, including a South-East highway. If we share the infrastructure, we will build a strong economic partnership in Central Europe,” concluded Jarosław Kaczyński