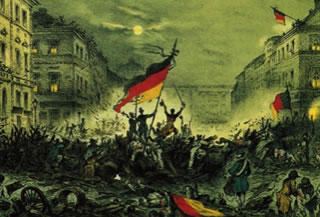 A reporter attacking PiS (Polish Law and Justice Party) in a German weekly, or an institution praising Muslim immigrants to the Polish public, or the largest commercial Polish radio station, or a foundation organizing an anti-PiS rally of reading the constitution with the Constitutional Tribunal judges, or a former PO (Civic Platform) Minister of Defense. What do they all have in common? Funding from Berlin.

Die Zeit promotes the blogs with the following statement: “The rise of an authoritarian state: the GW reporters are blogging about Poland for Zeit Online.” The column is illustrated with a photo showing hundreds of young Poles celebrating November 11, and displaying national colors (which, according to GW reporters and the German press is a manifestation of the Polish “authoritarianism”). “Step by step, the new government is building an oppositional and nationalistic country,” state the blogs’ introduction posts, written by Germans. A few other lies have been posted there as well, such as that the people of culture are victims of oppression in Poland and that journalists who criticize the government end up in trouble. “Our colleagues from the GW fear that Poland’s fate might be worse than that of Hungary’s, ruled by the Orban’s government,” write Germans, justifying the GW reporters’ attitude. They add that the government in Warsaw restricts the rights of minorities and civilians, while approving and encouraging xenophobia and… Europhobia.

It would seem shocking that Polish reporters become regular employees of a German newspaper in order to attack the government in Warsaw while writing in German language. Rafał A. Ziemkiewicz proposed on a Twitter to “monitor the volksdeutsches.” However, looking at the links between Germany and political and media institutions in Poland, becoming a blogger for Die Zeit comes as their natural consequence.

A perfect example is Michał Kokot, one of the GW reporters invited by Germans to write for the anti-government blog. In 2013, during the Polish-German Media Days, promoted under a slogan “Overtaking change – Poland and Germany 2013,” Kokot received a Journalist Award. “How a German electrician brought us joy,” was he title of his awarded article. “Kokot’s work was one of four awarded out of 183 entries. The award and a cheque for a substantial amount were presented to Kokot during the Friday gala by District Marshal Rafał Jurkowlaniec, who also worked for GW in the past,” reported the local GW in Wrocław. The award was funded by three German states, Mecklenburg-Vorpommern, Brandenburg and Saxony.

Kokot wrote for Die Zeit even before he started blogging for them. He criticized Polish people and the Polish opposition. In 2014, he claimed that “anti-Semitism and racism have been increasingly acceptable in Poland.” “During communism the extreme opposition were virtually non-existent in Poland. Brutal attacks against foreigners began after the system changed,” Kokot wrote. His articles portray Poland as anti-Semitic, primitive and racist. In November 2015, after the Independence Day Parade, Kokot wrote that radicalism became a main trend in Poland and that the line between extremism and political main trend seemed to have gradually become finer.

What does the reporter, who once praised a “German electrician,” post about the new Polish government on the Die Zeit blog these days? His first post was about the Constitutional Tribunal, second – about the alleged assassination of culture by the opposition in Poland. “The PiS announced cultural changes reminiscent of the communist era,” he wrote. His third post is about media. Kokot lamented that journalists critical towards the government lose their jobs in the public broadcasting media.

German enthusiastic approach to Muslim immigrants, apparent in the welcoming they received in Germany, has been largely promoted in the Polish media, despite being contradictory to the Polish interest. However, this should not come as a surprise considering that as much as 76 percent of the Polish press is controlled by foreign capital, mainly German.

According to Paweł Grzegorczyk from Jagielloński Club, the Bauer Publishing from Hamburg (Heinrich Bauer Verlag Kommanditgesellschaft) owns 39 media magazines in Poland, sold in over 248 million copies, which comprises to around 33 percent of the market shares. “Such percentage represents more control than all Polish publishers combined have over the Polish market,” wrote Paweł Grzegorczyk.

16 percent of shares is owned by Ringier Axel Springer, which owns tabloids such as Fakt, Przegląd Sportowy and the radically anti-PiS Newsweek Polska. Grzegorczyk observes that Ringier Axel Springer also owns 49 percent of shares of Infor Biznes, the owner of Dziennik Gazety Prawnej. A German group Polska Press (Verlagsgruppe Passau) has taken control over the local press in 15 Polish districts.

Radio RMF FM is also owned by Germans and its shares in the Polish radio market is 28 percent. The RMF group is owned by Heinrich Bauer Verlag Kommanditgesellschaft from Hamburg. The second largest radio broadcaster in Poland – Radio Zet – is, on the other hand, owned by a French holding, Groupe Lagardère.

Unlike in Poland, Germany remains in charge of its own media. The dominating publishers are the Axel Springer (owning, among others, BILD, Welt, Hamburger Abendblatt, Berliner Morgenpost), with 22 percent of the market shares; Verlagsgruppe Stuttgarter Zeitung with 8.5 percent of shares; WAZ Group, which owns Westdeutsche Allgemeine Zeitung and has 6 percent of the market shares; and DuMont Schauberg and Ippen Gruppe from Cologne with 4 percent of shares. The remaining shares are owned by small local publishers.

It is clear that any sort of balance is non-existing. The majority of Polish press and the most popular private radio station are owned by Germans, whereas Poland or other countries have minimal ownership of the media market shares in Germany. The only media in Germany owned by Poland are niche Polish community magazines and portals.

The racist patriotism and miserable volkesdeutsche

The largest Polish owner on the Polish media market is Agora, the publisher of Gazeta Wyborcza (GW). This makes it even more ironic that GW’s reporters should post on Die Zeit’s blogs and support Germany’s stance on immigration against the common public opinion in Poland, as well as remain on the frontline in the war against the Polish tradition and patriotism. GW’s article “Patriotism is just like Racism,” published after the 2007 Armed Forces Day parade in Warsaw, states that “patriotism has no moral justification and is an unnecessary relic of the past, remain of the times when tribal hordes fought for their territories, food and women […]. The mass excitement of Warsaw residents at the sight of a few killing machines and reverence paid to soldiers – people who volunteer to kill others – is a vivid proof that we live in the culture that condones and nurtures murderous instincts. The crowd might have as well gathered to collectively admire a bloodied chainsaw used by some degenerate murderer to dismember a victim.”

Adam Michnik’s daily GW has and still organizes various debates and meetings with the following foundations: the Friedrich Naumann (connected to the German liberal party FDP), the Friedrich Ebert (followers of the Social Democratic Party of Germany), and the Konrad Adenauer (connected with the CDU, which is Angela Merkel’s party). The foundations are financed by the German government. When the Polish Robert Schuman Foundation (RSF), financed by Konrad Adenauer Foundation, celebrated its 20th anniversary, GW announced: “Dear Foundation, may you live 100 years and longer, Robert Schuman would be proud of you!” The Polish Robert Schuman Foundation received 250,000PLN from the Konrad Adenauer Foundation in a single year of 2013. The Konrad Adenauer Foundation’s chairman is Hans-Gert Pöttering, who is a German Member of European Parliament and a prominent member of the CDU. 97 percent of the foundation’s budget comes from German taxpayers. Therefore, GW openly maintains an excellent rapport with foundations supported mostly by German taxpayers. Additionally, one of those foundations organizes annual Schuman parades in Poland, and associates the so-called school clubs from all over Poland.

The example of RSF operating in Poland while financed by Berlin demonstrates the alarming liaisons between Germans and the politically rational Poles, namely the Polish Civic Platform party’s supporters and associates (formerly the Freedom Union and the Democratic Union). The RSF co-founder was Tadeusz Mazowiecki, the first prime minister of the III Republic of Poland, and chairman of the Democratic Union and the Freedom Union. One of the present members in the RSF Founders’ Council is a former senator from the PO, Michał Wojtczak, whereas members of the RSF Program Council are a former deputy of the Democratic Union and the Freedom Union, Piotr Nowina-Konopka, and Janusz Lewandowski, member of the PO and Member of the European Parliament. Until 2007, the RSF was chaired by Róża Thun, who is currently a Member of the European Parliament and the PO. Her successor was Anna Radwan-Röhrenschef, who chaired the RSF until November 1, 2015 and, according to the information published on the RSF website, is about to become a director of the Bronisław Komorowski Foundation Institute.

Does the Polish Robert Schuman Foundation represent Polish or German interests? In 2013, the RSF released its manifesto, in which it claims: “Poland should enter the euro zone, as it is beneficial for the Polish economy and consumers, and it would allow Poland to participate in the EU decision process. Remaining outside the euro zone, Poland has no influence over the most significant decisions made by the European Union.” Recently, Rafał Dymek from the RSF published a post on Tomasz Lis’ portal, natemat.pl. “Is accepting around 7,000 refugees, to which the Polish government committed, really such a big problem for a country with 38 million citizens?” Arguing that it will threaten the Polish identity sounds rather funny, especially when stated by politicians who emphasize that Poland is a great and proud nation. “Let’s not exaggerate that helping such a small number of people would be too much of an effort for Poland.

Refusing to help in such circumstances demonstrates selfishness and lack of solidarity with both members of the European Community and the people who escape war,” he wrote. The most grotesque situation occurred recently, when the RSF joined the anti-PiS opposition by organizing a reading of the Polish Constitution with former judges of the Polish Constitutional Tribunal, Andrzej Zoll and Jerzy Stępień.

Another institution funding their projects with German money (coming mainly from the Konrad Adenauer Foundation) is the CSM (Polish Center of International Relations). Registered in 1996, the CSM, according to its founders, deals with Polish foreign policy and the most important issues of international politics. However, the institution acts in the interest of Germany, what became obvious when one of its experts, Kazimierz Wóycicki, published an article about immigration on the CSM website. “The wave of frightful ignorance and hysteria dominating in the Polish media is a real threat that seriously hampers the interests of Polish immigration policy. The causes of this hysteria have to be tackled separately, while we look up to countries such as Germany, Sweden, or Great Britain, and the benefits those countries earn thanks to their open immigration policy. The Cntral Europe, already on the brink of extinction, might end up following Orban’s path in its hysteria about refugees.”

There are other Polish organizations, which were established by the PO politicians, and are now financed by German foundations. One of the most popular of those is the ISS (the Institute for Strategic Studies), established in 1993 in Kraków by Bogdan Klich, former Minister of Defense, currently a senator from PO. The chairman of ISS is Klich’s wife, Anna Szymańska-Klich. The institute is funded by the Adenauer, Naumann and Ebert Foundations.