Lech Wałęsa transported to the Shipyard by a motorboat that belonged to the communist regime authorities? ABW has the recording. 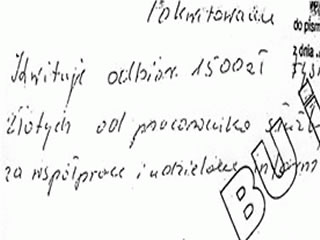 The ABW (Polish Internal Security Agency) is in possession of a recorded conversation between the officers of WSI (Polish communist Military Information Services) who talk about Lech Wałęsa being transported to the Gdańsk Shipyard on the day of the August 1980 strike.

“One of the officers captured on this recording is Colonel Leszek Tobiasz, who died in 2012,” informs Nasz Dziennik. The alleged meeting of the WSI officers took place at the Marriott Hotel in Warsaw in 2007. A name of a Polish Navy commanding officer, Admiral Romuald Waga, was mentioned during their conversation about Wałęsa transport to the Shipyard on the most important day of the August 1980 strike.

The interlocutors were Colonel Leszek Tobiasz, who died in February 2013, and Alexander L., whose identity remains undisclosed. The excerpts quoted in Nasz Dziennik are those of the two officers discussing a book about Wałęsa written by Sławomir Cenckiewicz.

Back in 1995 Anna Walentynowicz accused Wałęsa of having been transported to the Gdańsk Shipyard on the day of the strike by a Polish Navy motorboat connected to the communist government. Former President Wałęsa repeatedly denied those accusations.

However, Nasz Dziennik emphasized that when then the Solidarity leader became the President of Poland, the officer who operated the motorboat made a dazzling career. His name also appears in the report about the WSI activities. Romuald Waga had a rank of a captain in 1980, and after 1989 he was appointed the Commander-in-Chief of the Polish Navy, the position he held until 1996. The WSI was fully controlled by Moscow agents and criminals. This special security force was disbanded by Antoni Macierewicz in 2006, and was replaced with SKW and SWW intelligence agencies.

More information on this subject can be found in February 27, 2012 issue of Nasz Dziennik.