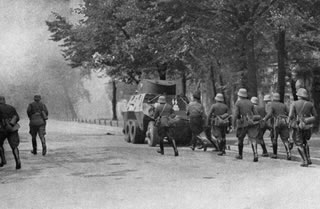 During the September 1939 campaign, there were many acts of sabotage organized by the Germans, in particular in the areas controlled by the Polish Army that had large clusters of the German minority. These acts of sabotage behind the front line were brutally punished by the Polish Army, and those caught red-handed – were sentenced to death for treason. Incorrect judgments and uncontrolled lynching directed at perceived perpetrators of such acts also took place at this dramatic time.

The most well-known operation took place on 3rd and 4th of September in Bydgoszcz, northern Poland, where the retreating Polish troops of the 15th Infantry Division of the "Pomerania" Army were attacked by unknown perpetrators. An attack on civilian population also took place at the same time. Probably around 20 soldiers and 5 inhabitants of Bydgoszcz were killed. This led to a reprisal by the Polish military authorities. As a result of actions carried out in the city, from 160 to over 400 people considered as perpetrators were caught and shot, the numbers differ, depending on the sources.

The post-war investigation, conducted by the Commission for the Investigation of German Crimes in Poland in the years 1945–1948, determined that "on September 3, 1939 in Bydgoszcz Germany undertook a planned subversive action at 10.15 in order to invoke panic among the retreating Polish regiments." A group of prosecutors led by Kazimierz Garszyński determined on the basis of testimonies of eye witnesses that there were 46 regiments in the Bydgoszcz area from which saboteurs were shooting. About 300 Germans were killed as a result.

The Germans began retaliation operation just after September 5, when they took over the city. 350-400 civilians were shot in public executions. The most spectacular crime occurred on the Bydgoszcz market on 9 and 10 September. In the following months about 1,500 people were murdered in the Death Valley near Fordon.

The Germans used the events in Bydgoszcz for propaganda purposes. September 3rd was called "Bloody Sunday" (German Bromberger Blutsonntag) This phrase for the first time appeared in the German newspaper Deutsche Rundschau of September 7, 1939, and these events served as an excuse for bloody extermination of the civilian Polish population throughout the Pomerania region. According to German propaganda, Poles killed 1,000 people in Bydgoszcz. The Germans also claimed that it was an organized action of the Polish Army, led by Commander of the Army "Pomerania" General Władysław Bortnowski.

The assessment of these events is not clear to this day. According to German historians, there is no direct evidence that subversive activities were carried out in Bydgoszcz against the retreating Polish Army, but Polish historians have determined that such operations were planned. This is also confirmed by the testimonies of eye witnesses.

Until recently, German publications explicitly called these events as a bloody massacre of innocent civilians of German nationality. However - as Dr. Tomasz Chinciński from the Bydgoszcz branch of the Institute of National Remembrance stressed - a breakthrough in the German position took place. It was the publication by Günter Schubert "Bydgoszcz Bloody Sunday. Death of the Legend." The Polish edition of this book was published in 2003.

This German journalist, a historian by profession, argues, contrary to the position of German historians to date, that there was a German provocation in Bydgoszcz. Some of the inhabitants of Bydgoszcz joined a group of diversionary operatives who came from Germany via Gdańsk. They formed several groups that were strategically positioned at several key locations in the city of Bydgoszcz and began shooting at the retreating Polish soldiers in the coordinated manner. Schubert analyzed, among others, documents of the Polish 15th Infantry Division of the Pomeranian Army. The author also confirms that in the course of suppressing this subversive operation innocent Germans were killed.