The Vampire from Gazeta Wyborcza 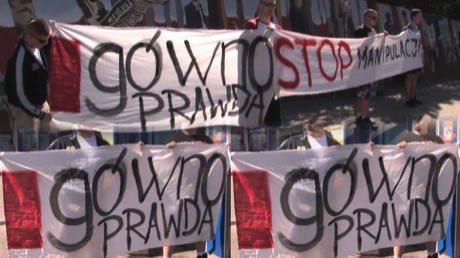 Saying that I don’t know Wojtek Maziarski would be a lie. We are not that close, but in a way, we do trust and respect each other.

We come from two different worlds though. Maziarski is a true offspring of the Gazeta Wyborcza, and a slave of the Adam Michnik’s ideology. Michnik has been trying to impose this ideology on Poland for years. The Gazeta Wyborcza has been and still remains the main point of reference on today’s Poland. While it remains an influential newspaper indeed, it is also a killer of free discussion in our country. It has been destroying, and still destroys, decent people. It has been promoting, and still promotes, skewed vision of history that is detrimental to Poland’s image and reputation in the world.

However, when Wojtek and I met at Newsweek Poland back in 2003, we managed to get along and appreciated each other’s commitment and skills. At that time, though, Newsweek Polska was completely different from what it is today. We expressed our opinions daringly; we were able to judge Polish realities candidly, and from different angles. Yes - Wojciech Maziarski, Piotr Zaremba, Michał Karnowski, Piotr Bratkowski, and I, worked for the Newsweek back than. Today however, I struggle to feel proud about it seeing how this legendary American weekly has become a tool used to attack undesirable politicians.

Let me be clear - I have respected Maziarski since the times we worked together for Newsweek. Obviously, I find it hilarious when he can’t understand contemporary world, due to the blurry vision he was once injected with by Michnik. However, I value his ability to apologize when he makes a mistake. I still remember his surprise at Tomek Terlikowski’s article about God approving sexual intercourse; it was just too much for Maziarski’s Wyborcza mentality. Sometimes, aggressive nature of his articles irritates me. Maziarski continues to write for Wyborcza, and having read one of his articles, I told him that while generally he is a decent man, he becomes a "vampire" the moment he starts typing. “Are you any different?” - he asked, and we both cracked up.

Comparing him to a vampire makes sense though. Maziarski has just published a book. Not exactly a horror, but a thriller nonetheless. It is a story about a town, where people disappear. They pack up, they leave, and they call their family less and less often. The main character slowly discovers how this elimination occurs…

I don’t want to reveal details of the “Selekcja,” [eng. “Selection”], because they’re not significant here. The important fact is that Maziarski portrays himself as a likable author - nostalgic, sensitive about the past, and reminiscent of the Good Ol’ Days. Here, he is far more sensitive than he appears in his columns, where he praises the heartless economic era of the Balcerowicz. On the pages of this book, he simply is Wojtek Maziarski that Wyborcza readers don’t know.