British MP Daniel Kawczynski, unlike his accusers, has no reason to apologize! 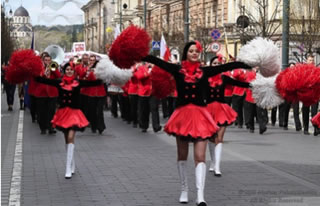 Recently, the only Polish born member of the British parliament was attacked for attending a National Conservatism conference in Rome that, amongst other agenda items, paid tribute to Polish Pope John Paul II for his role in bringing down Communism in Eastern Europe.

One of the critics of MP Kawczynski stated that "It's disgraceful that just one week after Holocaust Memorial Day Daniel Kawczynski has shared a platform with anti-Semites, Islamophobes and homophobes.” Did he really? Even if he did share a platform with anti-Semites, Islamophobes and homophobes, why would that be disgraceful? Does one automatically assume the same opinions of others who share a particular platform? Does just sharing a platform legitimize the opinions of others who spoke at the same platform? Does just sharing a platform indicate support for all the actions and thoughts of others who stood on that platform? This is ridiculous. If the answers would be yes, then anyone who spoke at the United Nations should be condemned for having shared a platform with quite a few unsavory persons. Everyone who recently shared the platform with Vladimir Putin at the World Holocaust Forum in Israel should also be condemned. Just curious, have any of those who attacked the Polish MP ever attack politicians or dignitaries who attended the United Nations or the World Holocaust Forum because of the presence of others at the same venue? I don’t think so.

The accusations against Kawczynski are nonsensical. In the absence of any rational reasons to support the attacks against him, one should consider as the root cause of these accusations irrational ANTI-POLISH BIGOTRY by those that leveled those accusations, by those who failed to support him from his own party, and the commentators who tendentiously wrote about the issue.

It is clear that the attack on MP Kawczynski was purely a disgusting exercise to humiliate the only Polish-born member of the British parliament, because he is proud of his heritage, has challenged unfair and unsupported claims against Poland, and dared to speak at an event that paid tribute to the only Polish Pope in history. While the Polish Pope fell victim to an attempted physical assassination and survived, MP Kawczynski has fallen victim to character assassination and will also survive this with the help of the Polish community, and those who have enough brains, common sense AND the decency to see this attack for what it was. Looking at the comments under the seemingly coordinated articles about this fictitious issue, and about the Chamberlain-like behaviour of the British Conservative party, not many agree with or have fallen for the findings and depictions of the affair by Buzzfeed, The BBC, The Guardian, The Independent, The Telegraph, UK Yahoo, etc. who have discredited themselves with their reporting on this situation. When will politicians in England learn that the media have lost their influence, and their knee jerk reactions to media attacks are no longer valid? Are they not familiar with the term “Fake News,” and the ratings of the person who made this term a household one?

The whole affair against MP Kawczynski is a disgrace, and the MP, as well as Poles in Britain and around the world, deserve an apology from the following persons and institutions: The UK Jewish Board of Deputies, and specifically President of the Board, Marie van der Zyl; Conservative peer Lord Eric Pickles who is also special envoy on post-Holocaust issues; UK Labour Party MPs Andrew Gwynne, Margaret Hodge and Alex Sobel; Conservative parliamentarian Andrew Percy; Labour leadership candidate Lisa Nandy; journalists Alex Wickham, Jon Stone, Rivkah Brown; The Jewish Labour Movement and specifically Mike Katz; The Campaign Against Anti-Semitism; and The Muslim Council of Britain. Naturally, we can expect no apologies until those iinvolved come to terms with their anti-Polish bigotry and biases.

For well-written criticisms of the British Conservative Party and of those who leveled the ridiculous accusations against MP Kawczynski, please read the below linked articles which, by their thoughtfulness, facts and convincing arguments, put to shame the articles on the same topic by above listed media outlets.