Why Nord Stream II is totally ignored by the Polish Government? 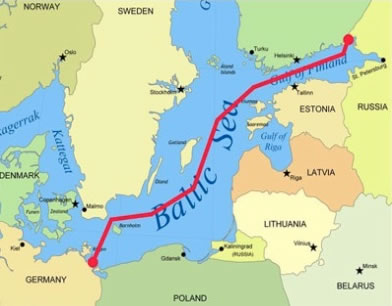 As the immigration crisis was unfolding in Europe, an important meeting took place in Vladivostok, Russia, on September 4, 2015, between Gazprom Chairman Aleksey Miller and representatives of German corporations BASF and E.ON, French ENGIE, Austrian OMV and Royal Dutch Shell from Great Britain. Away from the spotlight, the Nord Stream II natural gas pipeline project advanced from a memorandum of understanding to a binding agreement whereby Gazprom forms a consortium with several major European energy companies, preserving for Russia the controlling 51 percent stake in the new venture.

The agreement anticipates building two gas pipe lines under the Baltic Sea with overall capacity of up 110 billion cubic meters of Russian gas per year, potentially replacing Ukraine as the main transit route for Russian gas to Europe, and eliminating Poland and the Baltic states all together.

Parts of Nord Stream II will be built on territorial waters of Russia, Finland, Sweden, Denmark and Germany. This arrangement allows for transit of Russian gas to the European Union through elimination of gas pipelines in Poland and Ukraine by 2020.

The sole owner of the pipeline as well as the sole supplier of gas will be Gazprom. This dependency on one provider violates the principles of energy policy of the European Union. Unfortunately this energy policy is constantly subjected to tremendous political pressure from Russia. Thus, earlier concessions in the case of OPAL land portion of Nord Stream that clearly violate the principles of EU energy security opened the doors to further violations.

Although the Vladivostok agreement does not directly violate sanctions imposed on Russia for annexation of Crimea, it has significant political and security implications for Europe. Clearly, this agreement may lead to shutting down the pipelines run through Poland and Ukraine. Such situation would force Poland to rearrange its gas imports from Russia to Germany, since Germany will become the main recipient of the Russian gas and the main beneficiary of a new arrangement. The gas infrastructure in Poland is not designed for such an arrangement.

Furthermore, the Vladivostok Agreement anticipates that Gazprom will take over the storage infrastructures of Nord Stream I from the German chemical group BASF, including the largest storage facility in Europe with the capacity of 4 billion cubic meters (bcm). All Polish magazines together have the capacity of about 2,5 bcm. In exchange for these storage facilities the BASF subsidiary Wintershall will receive access to Siberian gas fields, estimated at about 274 bcm of gas.

The approval of Nord Stream I the Polish Minister of Foreign Affairs called as the second Ribbentrop-Molotov Pact. The projected Nord Stream II will further strengthen Germany as the sole energy decision maker in Europe. In light of German call for solidarity in dealing with the immigrant crisis, German solidarity with respect to the most vital issue of energy security for Central and Eastern Europe comes to play.

1) Why the mainstream media in Poland did not inform the Polish public about the Vladivostok agreement?
2) Why the mainstream media in Poland do not inform the Polish public of potential energy security threat to Poland arising from a new Nord Stream II project arranged by Germany and Russia.
3) Why the Polish government does not raise the Nord Stream II issue in negotiations with Germany on immigrant crisis?
4) Why the President of the European Union Donald Tusk is silent on Nord Stream II?
Is he merely a puppet of Angela Merkel?
5) How long the immigrant crisis will be used as a cover-up in the power struggle for control over Europe and the world domination?
6) Does the Polish foreign policy exist at all?
7) Why the Polish opposition does not act on this issue?
8) Does the secret recording by the Polish security service ABW of Polish politicians’ conversations with Russian businessmen, which are not yet made public, have anything to do with the Nord Stream II project?

Finally, the key question is: Does Poland still retain any sovereignty after the Smolensk decapitation?