Who is trying to “Turn off the government in Poland”? 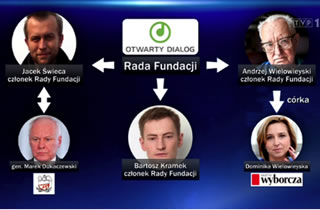 If a domestic political entity in Poland receives most of its funding from a foreign source, one that is outside of Poland, then such an entity does not legitimately represent the interest of the interest-groups within the country itself. Nor is it an emanation of true social concerns. It is an expression of someone else's interests. Here, that entity is trying to pursue its own agenda in the framework of a democratic space in order gain something inside of Poland - observes the presidential advisor, Prof. Andrzej Zybertowicz.

During the TV show "Woronicza 17," a group of experts discussed the role of external, foreign agents of influence, in instigating the riots in Poland. Among several issues raised, was the role played by the Open Dialog Foundation and the sources of its founding. The Minister Coordinator of special services Mariusz Kamiński had contacted the Ministry of Foreign Affairs (which exercises statutory supervision over this foundation,) with a request for the foundation’s financial records. In his opinion, the recent activities of the Open Dialog Foundation, and those of its Chairman, Bartosz Kramka, in particular, raise serious concerns that the foundation violated the Polish law. The Ministry of Foreign Affairs requested the assistance of the Warsaw Chamber of Tax Office in conducting a comprehensive fiscal audit of this organization.

During the TV show the financial statements of the Foundation and its donors were discussed.

All authentic social and political organizations, and interest groups and movements, form an important part of a legitimate civic discourse. But, when third-party entities receive most of their funding from abroad, then it is not an emanation of the interest groups within the country. It is not an emanation of a genuine social engagement. It is an expression of someone else’s interests; the interests of those who try to gain or win something in Poland in the framework of a democratic space. We shall distinguish all authentic social movements, that rely on membership dues of its members and the time of its volunteers, from social movements that are paid for by various foreign entities, said Prof. Zybertowicz.

While referring to the action of the Minister Coordinator for special services, Marek Suski, a Law and Justice MP, stated that if there are legitimate reports that foreign players influence the current situation in Poland, then the security of the country demands that such threats be verified immediately. These tasks are to be carried out by the special services, whom must follow leads, verify allegations, and either confirm or reject them. These tasks are constitutionally imposed on the Minister Coordinator of special service. Poland is an important European country, in which big interests are clashing. These powerful interests are often supported by operations of special services of foreign countries with vested interests in Poland, Suski said.

Recently the media reported that Bartosz Kramek of the Open Dialog Foundation was the author of the instruction entitled: "Let the state come to a halt! Let's turn off the government!" This guide to how to overthrow the Polish government of Prime Minister Szydlo by force, appeared on the internet at the time of mass protests against the judicial reforms, and contained step-by-step instructions on how to proceed.