We must take up the fight! 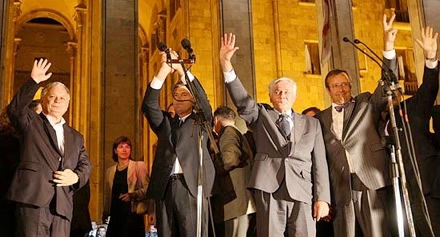 We can continue to ignore “an elephant in the room” or we can boldly face what is rapidly unfolding behind Poland’s eastern border with potential grave consequences for the country and the entire Europe. A few recent articles discussing the matter of Poland’s national security represent just a tip of the iceberg in terms of concerns voiced recently by many experts.

Beyond the scope of this article remains a tragic state of the Polish Armed Forces and inadequate national security policy based, among others, on the ‘reconciliation’ policy sanctioned by Mr. Putin and forced on the Polish people by the ruling coalition of PO/PSL in the aftermath of the Smolensk Crash of April 10, 2010.

It is worth to note that just recently Germany announced the plan on changing their future defense policy, vowing to reject ‘any taboo’ (1). Do they know something we don’t?

Just to get a glimpse of the crisis discussed mostly behind closed door, the following excerpts are telling:

“Even if no open armed conflict unfolds, Russia can play other strong cards. - It already carries a high intensity information warfare; this can result in diversionary attacks on critical infrastructure (e.g. on the communication or information infrastructure), terrorist attacks carried out under ‘false flag,’ or provocations such as the so-called People's Republic of Vilnius in Lithuania, so far only for the media, in order to spoil relations with this neighbor, cyber attacks, etc.,” enumerates prof. Machnikowski, and adds: “ Russia uses a very wide range of resources to achieve its goals, and (Poland) as a country bordering such country should be prepared for a variety of forms of hostile operations.”(3) In the meantime, under suspicious circumstances Warsaw just lost Lazienkowski Bridge deemed a critical infrastructure. (4)

According to the former head of the Defense Ministry, Russia gives clear signals that it wants to restore the old empire. To do so, it must attack our country, says Romuald Szeremetiew (5)

“12 months ago no one imagined that the Russian armed forces would land in the Crimea, and would conquer it. And even if they had predicted [this scenario], it would be considered a warmongering”, Brzezinski said during his speech before the Senate Committee on the US armed forces.”(6)

“Let me tell you what my nightmare is. Well, one day, and it literally takes one day for Putin to occupy Riga and Tallinn, because there is no way that these countries themselves stopped him, and we - the West - we say that it is outrageous and shocking, we express our outrage but we do not do anything more. Because, immediately there will be voices raised that we cannot risk a nuclear war. It's not like we put the fleet in the Baltic, as we have done in the Normandy landings”, said political scientist. (7)

Notably, Mr. Brzezinski is partially wrong in his recollection of the issue as he is tardy in expressing it. Also, a depth of his analysis disappoints considering that at the time of the first symptoms of Russian aggression, namely during the Georgian crisis of August 2008, there was a president in office who not only predicted but first and foremost opposed the dangerous precedence: Polish President professor Lech Kaczynski who was killed in the Smolensk in April 2010, during his historic speech in Tbilisi, Georgia in 2008 stated: “Today Georgia, tomorrow Ukraine, next the Baltic Republics, and then my country Poland!”

Poland must adhere to the coincidental motto: “in terms of (national) security better safe than sorry.” (8)