The Russian-Ukrainian conflict cannot be resolved without the USA 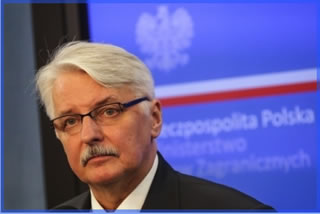 Europe needs America. We shall keep reminding our partners that the resignation from transatlantic collaboration calls to mind bad experiences – Witold Waszczykowski, Polish Minister of Foreign Affairs said in Davos.

During the 47th World Economic Congress in Davos, Minister Waszczykowski participated in the discussion panel on security in Europe. The panel also included the EU High Representative for Foreign Affairs and Security Policy Federica Mogherini and Secretary General of the North Atlantic Treaty Organization Jens Stoltenerg.

When asked about new challenges for security in Europe from the perspective of NATO and EU eastern member states, the minister stated that the countries from Central and Eastern Europe feel more secure today. That feeling is reinforced by the decisions taken at the NATO summit in July 2016 to assure the permanent rotating presence of Allied forces in countries of NATO Eastern flank.

When we joined NATO in 1999, for many years we felt like second rate members (…) but from the beginning of this year we finally feel that the security status of Poland and other countries of Eastern part of NATO is increasingly similar to the countries of Western Europe – he said.

When asked if he does not fear the escalation of conflict with Russia in light of Russian accusations about provocative character of NATO movements, the Russian militarization of Kaliningrad and military exercises and training, Mr. Waszczykowski replied:

I was worried when the Russian aggressive behavior was not met with any reaction or response.

He stressed that agreements of the Warsaw Summit anticipate both deterrence and dialogue.

It is now up to Russia to decide if and to what extent they want to use this opportunity – he added.

He also pointed out that NATO forces deployed on the Eastern flank were not extensive.

They just signify the determination of NATO to defend its members, nothing more than that. There is no aggressive posture on the part of NATO – he said.

A signal that we are sending to Russia is this: we will defend ourselves should the situation so require. At the same time we are ready to return to dialogue and cooperation between Russia and NATO/ EU. Regrettably, the offers we are sending to Mr. Putin will be rejected as he needs an enemy, a scapegoat to use in the internal affairs.

Referring to the last-year NATO summit, the Polish Minister stressed the significance of closer ties between NATO and EU as well as the termination of „frozen conflict” between these two organizations.

For a number of years, we were dealing with a schizophrenic situation, whereby the very same ministers of the same states, when visiting Brussels, behaved differently, depending on the organization.

He added that for a long time it has been unthinkable to „talk about the EU at the NATO premises and vice versa.”

Also Ms. Mogherini stressed the need for better collaboration between the EU and NATO. „We have done more in this field in the last seven months than in the previous seven years” – said the head of the EU diplomacy – “as we have eventually realized that, both in the EU and NATO, we have to abandon the ghosts of the past and refocus our attention on the threats to our security today.”

The future of common security and defense policy of the EU was one of the topics of discussion. Mogherini stressed that in time of great changes in global geopolitics, „Europeans can only be global players through the EU.”

I have heard a lot about the loss of sovereignty by the member states. For me, the EU is the only way to reclaim this sovereignty in the world that is so complex and changeable – she added.

The High Representative also talked about the need to equip the EU in „new set of abilities.” This in turn requires common investments – among others in research projects and in the European defense fund, which would allow for integration of expenditure.

Combined expenditures for defense of all the EU member states equal 50% of American expenditures, and for that we only receive 15% of the product. Together we can achieve far more – she argued.

When asked whether the EU would follows suit if the US, based on the declarations of Donald Trump, revokes the sanctions against Russia, she replied:

European decisions are not taken in Washington but in Brussels or other place where the member states meet. Our decisions on sanctions against Russia for the annexation of Crimea and aggression on Ukraine will always be based on the merits and the degree of implementation of the Minsk agreements (…) and they will not be determined by decisions taken elsewhere – she said.

The head of the Polish diplomacy commented on Ms Mogherini statements:

I agree with Federica that we want to reach the decisions among 28 states in Brussels and we want to keep the EU as united as possible. At the same time, we want to prevent „schizophrenia” and maintain as strong transatlantic relations as possible – he stressed.

He argued that the need for collaboration with America is historically determined because in times when this cooperation was weakened both world wars and Balkan war took place. „Without Americans we are also unable to settle the conflict between Russia and Ukraine” – he added, referring to agreements signed in Minsk by Russia, Ukraine, Germany and France.

We need America – he concluded.

The Polish Minister also pointed out to the failure of all initiatives to-date aimed at building more autonomic security integration of Europe and did not include America.

We shall remind others about these bad experiences and convince the new administration in the US. It will not be the Trump administration only but also administration of the Republicans, with people we have known for years (...) like Mr Henry Kissinger with whom I had the chance to talk to in New York two weeks ago – he added.