Did Putin use reflective measures - one of Kremlin's most mysterious methods of attack - in recent slander of Poland? 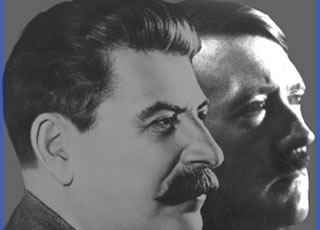 With many pathologies of the Russian ruling class, it shall be acknowledged that no matter who governs, Russia is able to preserve and maintain the continuity of goals. The implementation of Moscow's policy is not limited to several projects planned for several years. Rulers of Russia consistently act in accordance with guidelines written already 200-300 years ago in the instructions of Peter I or Catherine II.

Such words as "Russian imperialism" or "Eurasianism" contain more than a few general geopolitical vectors because Russian institutions, although under changed names, consistently work on their implementation for several generations. Therefore, Russia has the necessary time and resources to develop, test and improve precise plans to destroy the enemy.

Among the many evolving tools of Russian imperialism, reflective management is of paramount importance today. This is a strategy probably invented by prof. Vladimir Lefewr (this is the official view but not entirely confirmed), who once worked at the Computer Center at the Ministry of National Defense of the USSR, but today - what a well-known scenario! - works at the University of California (Irvine, USA). Combining mathematical and psychological education, Lefewr had developed certain mathematical/psychological/sociological models that show how a given society behaves in response to specific stimuli such as social processes, provocations, changes.

Michał Wojnowski, author of one of several scientific articles on this subject, explained that creating such models leads to acquiring the ability to reason like an opponent.

Of course, man can also predict the response of other people, societies and countries through intuition, empathy, experience, or reasoning. It does not take a genius to see the havoc caused by the ideas of feminists and sexual liberation, including homosexual movements, in the first years of the Soviet Union. Therefore, it is logical to ban such practices and… propose instead that they be implemented in the West. It will be better to let the enemy play with such progressive "inventions." Moreover, this is in line with the maxim of Willi Münzenberg (1889-1940), who used to say: “We will make the West so corrupt that it will stink.”

So, in the ranks of the Communist Party of America not only feminists were promoted but also founding fathers of LGBT movements (Harry Hay), and the Soviet favorite movements, as long as they operated in the West and not in communist countries, that is disarmament movements and during the Cold War pacifists’ groups. When it became necessary to stop the expansion of Western nuclear power plant industry - also ecological movements were employed. However, in the second half of the twentieth century, the traditional tools of destroying the enemy societies from within was enhanced by advanced technologies, computers and their enablers such as prof. Lefewr and his successors, such as Major General Sergei Komov.

When describing Soviet and Russian attempts to predict the enemy's reaction, the point is not to recognize the Kremlin as an all-knowing mechanism that steers the world like a puppet theater, but rather to look colder at the events of recent times.

After Putin’s slander of Poland, we heard some voices that "Putin has gone crazy" because his attacks of Poland hurt him. Such voices are nice to hear but they do not help draw proper conclusions. Putin already went crazy in 2014, when he took over Crimea and Donbass - regardless of whether it paid off or not. But the threat to Ukraine and to Western unity turned out to be very powerful - and still reverberates.

If we assume that Putin has gone crazy by blaming Poland for WWII, how do we explain the fact that two Russian embassies (in France and in Poland) and some unspecified press department of the Russian Ministry of Foreign Affairs, on their Twitter accounts responded with the same lies and aggression? Have the press officials in these institutions also gone crazy? It is very unlikely that these press spokesmen arbitrarily challenged the reaction of European and American diplomats, and it is also hard to believe that Russian diplomats take such action without directives from the headquarters.

So, for a moment, let’s reject the hypothesis of "madness" and our great narrative victory. Instead, let's try to list a few possible goals that the Kremlin set for itself before initiating this provocation:

The silence of some parliamentarians and absurd indignation by some journalists over the silence of President Duda (could it be better to exhaust all Polish options upfront?) would give even a 50-year-old Soviet computer an accurate reading about whose actions the Kremlin can count on if it attacks again. The computer of the year 2019 probably has a written network of Polish reactions more precisely than the Poles know it themselves. It's time to start the countdown to the second challenge. This is not just about the past!