A recent history of murderous haters 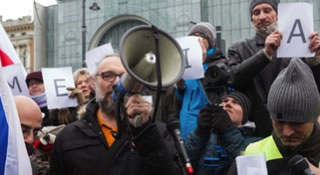 As long as the editors of "Gazeta Wyborcza" (GW) and leaders of the Committee for Defense of Democracy (KOD) use the rhetoric of hate, they risk aiding and abetting a crime.

"Giertych to the sack, the sack into the lake" - that is what the students from the radical left chanted in June 2006. Delighted GW advertised this protest.

In December 2015, Roman Giertych, not drowned in the lake, was shown by TV stations jumping in protests together with those who once called for his killing. The GW advertised the new protest even louder than the one from 9 years before. This time, KOD protesters willingly carried signs with a shotgun aimed at a duck. In the softer version it sounded like "a duck on a wheelbarrow," what can be understood more literally.

In June 2010, one of the important Polish politicians of the ruling party, Janusz Palikot, encouraged his followers to "shoot Jaroslaw Kaczynski, and put his skin on sale in Europe." The GW was delighted with MP Palikot and presented him as a model of a modern citizen. "Slaughter the rest of the Law and Justice (PiS) pack!" – urged publically back then Foreign Minister Radoslaw Sikorski. Soon after, a citizen named Richard Cyba, inspired by such encouragements, went to look for a living PiS MP - to kill him. He had to "settle” for a PiS councilman from Lodz: he killed Marek Rosiak. In this case, the GW has not repeated its favorite warning against a repetition of the political killing caused by the hate campaign exemplified by the murder of President Narutowicz.

April 11, 2010, even before the wreckage of the governmental plane with President Lech Kaczynski has even cooled in Smolensk, the same group of people began a series of "jokes" about "a cold Lech" and made a mockery of the suffering of Mr. Gosiewski family - whose "spirit”, to the delight of GW followers, was to be seen on a train station in Wloszczowa.

On the same day the same GW has launched a speculation campaign over the alleged four approaches to landing, what was later shown to be a pure lie. Undeterred GW journalists promoted a theory that the crash was a result of a "national malady" of Poles who with suicidal fantasy aspire to risk death on the altar of the fatherland. Then they began innuendo aimed directly at President Lech Kaczynski who, according to them, issued an order to the pilots to execute a suicidal maneuver, or maybe - as Lech Walesa suggested - all were sentenced to death by a phone call from Jaroslaw Kaczynski.

And today there are people who believe in those hateful and sick speculations. And even today they express their emotions as follows:

“I sincerely hope to see the execution of the PiS band - Kaczynski, Duda, Macierewicz, Szydlo, Kuchciński, Kepa, and a few others. This should be a public execution, so that I can open the champagne, spit and throw a rock at them. I am writing this fully conscious and sober. As a man, councilman and a member of PO. And I'll continue writing this until this execution does take place. They do not even merit a due process - only kill them and into the sand.”

These are the words of Michal Skoczen, councilman of PO from Krakow. His statement has coincided with the declaration of a public execution of 47 people in Saudi Arabia. Beautiful model to follow, within the framework of preparing us with the culture of the newcomers from the world of Sharia.

During the KOD demonstrations on January 9, 2016, one of the posters read: "Stalin and Dzierzynski better than Kaczynski". KOD supporters, present on that day under the patronage of Adam Michnik Deputy, not only have not distanced themselves from the content of this poster, but deemed it worthy of defense as it represents their emotions and opinions.

Stalin? He was not so bad. This wisdom could be proven by generals who supported in the last presidential election Bronislaw Komorowski. Their official letter in support of the so-called "democratic camp" could convince you with the full force of their persuasion. Let us recall who is General Teodor Kufel: the master and teacher of Czeslaw Kiszczak, the commander of security forces in Kielce, Gdansk and Poznan during the Stalinist era, later known as the first graduate of KGB school (in 1954) in Moscow. How about younger friends of general Kufel, who also remember Stalinist times as the best times of their lives and members of the military junta from the time of martial law called “WRON 1981?”  - They are Jozef Użycki, Jozef Baryła, or Jozef Szewczyk - the chief military prosecutor during the Martial Law, or Mieczyslaw Michalik who was the commander of the Felix Dzierzinski Military Political Academy. For them, certainly Stalin and Dzierzinski are better than Kaczynski. The first one was responsible for killing of only a few dozen of millions of people, including hundreds of thousands of Poles. It is worth remembering Order No. 00485 of 11 August 1937, which is probably not known to the KOD demonstrators, that Order cost the lives of 111,091 people in the so-called Polish operation of NKVD - the most genocidal single order which is preserved in the history of mankind, just such a small detail, along with hundreds of thousands of deported to the gulags, tens of thousands killed in the Katyn massacres, trampled into the bottom of NKVD prisons.  Dzierzinsky - also, just hundreds of thousands executed and tortured to death in the name of "purity" of the revolution. To KOD protesters these crimes of Stalin and Dzierzynski are nothing in comparison to the "crimes" of Kaczynski!

Agnieszka Holland and hundreds like her "guru" from GW, as well as enlightened by this newspaper western politicians and journalists, even more eagerly point today to Putin as a counterpart of Jaroslaw Kaczynski, of course – a better counterpart. After all, they all fell on their faces before this KGB idol advocating the Polish-Russian reconciliation during the years 2007-2014. They fell the lowest in April 2010. So now they can revel: Kaczynski as another Putin.

Really? Where is the balance sheet for "genocidal records of the IV Republic of Poland?" Under Putin, over 200,000 Chechens were murdered. How about hundreds of journalists killed in Putin’s Russia. So many have died under the authority of Donald Tusk's best friend in the Kremlin. Does Tomasz Lis, who was allowed to run his program as he pleased in Polish Public TV over seven years with a lucrative pay thanks to courtesy of PiS chairman Andrzej Urbanski considers himself a victim like Anna Politkovskaya who was killed on the birthday of President Putin?

But they seem to believe in all this, they easily accept all this, incite others to hatred, and make the most egregious comparisons to Stalin, Hitler. Urging followers to Kill!  To finish off! - before it's too late! This is a logical conclusion of their hateful delusions. In the past, Jerzy Urban, now the spiritual patron of KOD, was the author of a series of publications about the need to silence "hate sessions" of Father Jerzy Popieluszko. His campaign ended with the brutal murder of Father Jerzy by Colonel Pietruszka and Captain Piotrowski. Now KOD members call to remove new democratically elected government. These are the traditions to which they aspire, which inspire their slogans displayed on their posters and signs.

As long as the editors of GW and leaders KOD do not separate themselves from these posters and signs, do not reject the hate rhetoric, they take responsibility for the crimes, which behind these slogans no longer merely lurk, they are inevitably coming.

The political murder committed by Richard Cyba has not reached the conscience of people like actor Jerzy Stuhr, who recently suggested in TVN24  that the defenders of the “ideals of liberty" threatened by the PiS regime reach for "a holy drink of blood." Someone will reach sir, and then you will be reminded of your words.

Dr. Andrzej Nowak, Ph.D., historian, journalist, sovietologist, a professor at the Jagiellonian University, Head of the Laboratory of History of Russia and the USSR at the Institute of History of Sciences, member of the Polish Academy of Sciences