Protection in exchange for Ransom 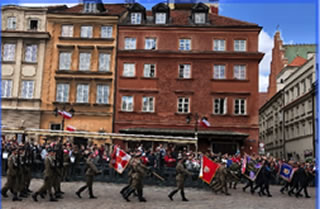 Jewish restitution claims against Poland for heirless property lost in World War II generate heated debates, huge emotions, various interpretations, and a lot of misunderstanding. These bogus claims for heirless property compensation are raised by aggressive groups of the Jewish diaspora, primarily from the United States. In other words, these claims are raised by the American Jews who want to stuff their pockets with the compensation for the property of the Polish and Eastern European Jews, although it was them who closed their eyes to the fate of their European brothers during World War II, and in fact through inaction sentenced them to death at the hands of the Germans.

Remember the fate of the Saint Louis ship that was sent back from the shores of the United States mercilessly? Even the Navy was used to drive this ship with almost a thousand of Jewish refugees from Eastern and Central Europe away from the US shore. The descendants of those who were deaf and blind at that time to the suffering of Jews in Europe today demand their property and their money, but because they have no legal title to anything, they simply invented some new tribalistic rights to heirless property.

They set up organizations to commemorate the victims of the Holocaust that become an excellent tool for the machinery described by Norman Finkelstein. Everybody should read his books to understand what this geszeft, i.e. speculative mechanism, is about.

Jewish claims have a long history in Poland, going back to the time of the criminal communist regime of General Wojciech Jaruzelski. In short, Wojciech Jaruzelski, his partner in crime Kiszczak, and his henchmen responsible for the imposition of the Martial Law on December 13, 1981, received guarantees of personal safety and security provided, however, that they commit Poland to paying unjustified Jewish claims. They of course promised to pay, received protection, preserved their power, and this anticipation of extortion has been hanging over Poland for 30 years now. The American Jews have been feeling the money in their wallets all this time. And hopes have been building as well. Today these claims exceed 300 billion USD.

Some communist apparatchiks even tried to build a political career on their promise to pay this ransom out of Polish assets, which would flow into the hands of the Jewish diaspora organizations abroad. Some merely tried to postpone it until Poland gets back on its feet. As long as Poland was not so visible as a country where the economic situation has been improving, these claims were not so urgent because realistically there was nothing to collect from.

But finally, a little bit of fat has been growing on the bones of Poland recently. This fat is now ripe to be teared off. That is why the pressure on Poland intensifies so much today.

The above statements are taken from a report based on testimonies of eye witnesses who described how the situation looked like at the dawn of the Third Polish Republic, in the Round Table deals that on the face of it supposed to end the communist era in Poland.

At the chessboard at that time the main roles were played by Wojciech Jaruzelski, David Rockefeller, Robert Maxwell, and several others. Let's review this matter in a historical perspective to see how this machinery was built over time. Please listen to what my consultant has to say. He is working on a groundbreaking book; it will be very important. I will share with you some of the fragments from this book now. Listen, it sounds a bit like a fairy tale.

In mid-1984, the Polish ambassador in London Stefan Staniszewski received a phone call from an assistant to then omnipotent and very powerful President of the Publishing House Pergamon named Robert Maxwell. His secretary called to propose a business lunch on a date agreed by the secretariats of both sides. Ambassador Staniszewski, sharp and intelligent diplomat, recognizing the stature of the potential interlocutor, sent a diplomatic note of high priority to the Polish Ministry of Foreign Affairs in Warsaw. He requested instructions from Warsaw and asked to notify Major Wiesław Górnicki who served as the chief adviser to Gen. Wojciech Jaruzelski. He asks Górnicki to notifiy General Jaruzelski about this proposal. In response, Górnicki informed Ambassador Staniszewski, called by his colleagues affectionately Funio, that Gen. Jaruzelski is very interested in this meeting and its conclusions.

During a 3-hour lunch at the elegant Mayfair restaurant in London, Maxwell informed Staniczewski that he just concluded a week-long visit to Moscow during which he received a confidential information from several independent sources that the Evil Soviet Empire would soon radically change its course. The power will go to the new, young, and technocratic team. Therefore, he asked that Staniszewski prepare a meeting for him in Warsaw at the highest political level possible. In return, in repaying the favor, he will prepare for Gen. Jaruzelski, in connection with his trip to the United Nations, a meeting of his dreams with people who decide the fate of the world and the well-being of the societies.

This is how it begins. The meeting of Robert Maxwell in the Polish Ministry of Foreign Affairs in Warsaw and in the Central Committee of the PZPR with General Jaruzelski takes place in the winter of 1984. The main topics of the talks are: the planning of a meeting with David Rockefeller in New York in September 1985, with the participation of his closest trusted advisors Zbigniew Brzezinski and Lawrence Eaglerburger in order to develop a plan for development of Poland in the perspective of 30 years, including the acceptance of the so-called Washington Consensus in economics. In other words, this was the infamous privatization program of Jeffrey Sachs supported in Poland by his man Leszek Balcerowicz.

Also on the agenda was the gradual restoration to the Polish historical consciousness - this is a direct quote from the document - of the huge role played by the Jews in over 1000 years; this should include the restoration of the places of worship and Judaic tradition.

The next topic on the agenda - selling to Poland via Maxwell - of the ultra-modern computer software together with the hardware from an Israeli company set up by Mossad. This hardware was to be used to conduct surveillance of the Solidarity opposition in Poland along with monitoring financial flows from foreign donors. The CIA Chief William Casey, then in office, personally gave the permission to sell this high-tech system to the Jaruzelski regime and bypass the embargo.

The meeting consisted of two parts: official and face to face. The meeting was between David Rockefeller and Wojciech Jaruzelski with the participation of the translator Jerzy Sokalski from the Polish Ministry of Foreign Affairs and assistant to David Rockefeller Patricia Smaily.

One more discussion took place that day but was not described in any protocol. It was with Ambassador Lawrence S. Eagleburger. No one knows the subject of this discussion and the participants are dead today, but the role of Lawrence Eagleburger in the US Department of State, his subsequent prestigious function as the President of the Board of the International Commission on Holocaust Era Insurance Claims, his zealous pursuit of unregulated insurance claims from the Nazi era, as well as the nickname he gained as Swiss Hammer for the Swiss Banks operation can give people some idea what was the topic of discussion with Gen. Jaruzelski back then and what was planned at that time.

It was Lawrence Eagleburger who was the main negotiator and the author of a huge success of the Swiss Banks operation. Instead of paying 47 million proven in the records of the Swiss banks, the Swiss paid over one billion 200 million dollars to the Jewish organizations. He conducted similar hard core negotiations with the government of the Netherlands, also with great success.

Finally, Eagleburger is also the author of the concept of the so-called Terezin Declaration. At this point everything becomes clear and consistent. In the discussions of the Polish deal took part also John Whitehead, then serving as the US Deputy Secretary of State and a life-long member of the Bilderberg Group.

So in 1885 General Wojciech Jaruzelski gave his cerograph for Jewish claims in exchange for David Rockefeller’s guarantee of security for himself and his comrades in Poland. David Rockefeller gave him the guarantee...

The fate of Robot Maxwell is well known already. He died in unexplained circumstances on the yacht. Juval Aviv wrote a book and it. He is not just anyone but the former head of the Mossad Commando that murdered members of the Black September Group after the Olympic Games Massacre in Munich. In his book he claims that Maxwell was killed by the Mossad Commando. Someone else took over Maxwell's role. David Rockefeller eventually also passed his role to his successors, passing away at the age of 102 in 2017.

The Jaruzelski-Rockefeller deal has been kept well alive regardless of who is in power in the United States, whether the Democrats or Republicans.

A Polish politician who most eagerly built his political position and future vision of international career on promising the Jewish diaspora that Poland would pay as much of this ransom as they wish was Aleksander Kwasniewski. It did not turn out well for him because of other reasons, including the personal ones. However, as President of Poland, the 10-year President of the Round Table Republic, known for confusion as the Third Polish Republic, he did a great deal of evil things in this matter. We remember his declaration in Jedwabne, the speech in the United Nations, and all public appearances, including the last speech Aleksander Kwasniewski gave, literally a few days ago. In this interview, he stated that Poland must not count on reparations from Germany. However, as to the claims of the Jewish diaspora, it is an open case and it needs to be dealt with. So much for Aleksander Kwasniewski, a retired dodger who, despite his efforts, did not make any international career.

By the way, it was Leonid Kuczma who destroyed his bright career prospects. One day we will address this issue as well. It was about the killing of Gongadze - journalist Gregory Gongadze - and the cover up of it by the Kwasniewski administration. So much for history. But this history unfortunately reverberates to this day.

This is the first episode related to the problem of 447 and Jewish claims. This story needs to be developed further in order to build a complete picture of the current situation. It is worth remembering however that the crisis that the current government has to deal with today has been growing over a considerable period of time as a result of back office deals in which interests of Poland have been traded for personal protection of the criminal Jaruzelski regime.

In this matter Ryszard Schnepf knows the most. He conducted such talks as the Polish Ambassador to the United Sates, formally of course because in reality he was the ambassador for the diaspora. But this is another story that adds up at one point in time and space. Until the upcoming October 2019 elections this topic will be muted in Poland. That is why we need to know more about it. But as you see, this is not a clear picture. This is not just about the cowardliness of the present ruling coalition in Poland. This topic has a long beard.