Poland is a big barrel of the black powder. Will it explode? Summary of TV Program „Bliżej” 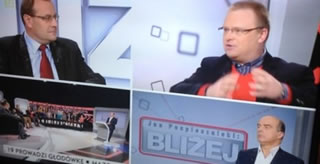 The strikes by many different social and professional groups, starting from coal miners, farmworkers to musicians, and also the launching of the presidential campaign by Andrzej Duda (PIS –“Prawo i Sprawiedliwość” opposition party) and Bronisław Komorowski ( PO - “Platforma Obywatelska” ruling party) were the topics that dominated TV program called “Bliżej” (Closer), on February 12, 2015, hosted by Jan Pospieszalski .

We are facing the effects of two or three mistakes made by the past government administrations in a period of 25 years: the state backing down from commercial deals and leaving producers without any support. They also withdrew from the dialogue with the society; third, mistakes in the state policy regarding the East, which at the present time has caused incredible losses.

Piling up the effects of these mistakes will emerge on many different fronts - increasing among different communal groups on strike - commented professor Kazimierz Kik.

These are problems which we have had for about a quarter of the century, but the protests and ensuing problems result from the fact that we have dissatisfied social groups in Poland.

After observing the elections and noticing certain weaknesses of Prime Minister Ewa Kopacz, those dissenting groups are testing the government to see what they can get from it. Either these groups will be pacified by force or by money- and this will not spill, or the situation will show new layers.

Railway workers are a sensitive group. The question is: Will the stronger opposition party make an offer to the Polish people taking advantage of the situation? wondered professor Antoni Dudek.

These protests do not have a common denominator yet. What they do have in common is public dissatisfaction with the method or direction of modernization adopted by the PO (the political party-Platforma Obywatelska governing Poland)*.

The PO government had responded to specific social groups, but have ignored others. (…) for example, they were very receptive to the parents and the children ( social group)*, said the publicist of the newspaper “Rzeczpospolita” , Michał Szułdrzyński.

I do not know if all of them stand against the wall.

(…) We can see a quick strategy of instigating one group against the other – in the mass media certain discussion were published; for example, the response by residents of Warszawa (Warsaw)* regarding the farm workers’ protests (blockades of the major roads)* was: “blockade your own roads wherever you live” or “you are too lazy to work” . The opinions shown in these broadcasts were based to a large extent on human emotions.

If the present government, which since 2007 has had the influence over some of the social groups, it is only verbally (…) „Poland is a big barrel of black powder -- will it explode, perhaps?”

This comment was made by the publicist of “wPolityce.pl” and “wSieci”, Łukasz Warzecha.

This will not affect the election results. We still have a political scene without alternatives- we will still enter the elections in the same form. Opposing the PO (the political party-“Platforma Obywatelska” governing Poland)* is a party which was rejected on several occasions and is led by a politician who is not very popular, so there is no alternative for PO. Attendance for the election in 2015 will be very low (…)

A process leading to the demise of Polish democracy begins – a lower level of the genuine representation mandate for the authorities - added professor Kik. With this assessment Professor Dudek agreed. He places the greater responsibility for harming the Polish democracy on the ruling party (PO)* .

Professor Dudek noted that there were some attempts to build alternative political forces on the right and on the left, but they had not succeeded. The reason is the funding of political parties, which favors big organizations and big political parties.

People have valid reasons to be dissatisfied; this could trigger protests, but they refrain - added Warzecha.

It is not true that there is no alternative to PO. I get the impression that a great number of Polish citizens do not see any connection between the national politics and people’s everyday problems - (…) they do not believe in politics and they do not believe in government. That’s why the attendance will be lower. People believe that politicians are not dealing with the problems that concern them, --another observation made by Mr. Szułdrzyński.

One part of the Polish society, which participates in the elections, is satisfied. The other half which does not take part in the election believes that it doesn’t matter. - but if someone who lives in a democracy does not vote, that could mean he doesn’t exist - added professor Dudek.

Jan Pospieszalski’s guests (on the TV program)* commented also on the nomination of the two candidates for the office of the President of Poland: Mr. Anrdzej Duda and Mr. Bronisław Komorowski.

Łukasz Warzecha cited his words written earlier on Twitter: To put side by side the convection of Andrzej Duda and the PO National Council is like putting together side by side two cars; the Porsche and the Polonez (Polish made in the past)*. I hope nobody wonders why this comparison was used(…)

Is this the alternative of introducing concrete proposals? (…) and the basic question is –can this alternative succeed? -asked a journalist from “wPolityce.pl”.

Andrzej Duda highlighted a very important flaw in Polish Democracy. A connected sequence of elections, parliamentary and presidential, shows that for both elections the same party is winning, and we have the formation of a triad, but the true representatives of society are pushed away.

What Andrzej Duda said shows whether the President is to become a partner or a party. For the time being the President is more of a representative of a party. Of course, if Mr. Duda is connected with PiS (Prawo i Sprawiedliwość), so in the event that PiS wins the election, the situation can be similar -said professor Kirk.

We do have the candidate of continuation - Bronisław Komorowski, and the candidate representing change - Andrzej Duda. The voter can decide. It is even a generational issue, and not only in the mental sense.

In the meantime, the thesis of Łukasz Warzecha is serious – perhaps for the first time the Polonez will overtake the Porsche - said professor Dudek.

The Polish people know President Komorowski. If he becomes associated with PO, it will be much worse for him(…) While Mr. Duda will have trouble to convince the people and show them that there is substance to his political platform. The fact that he is young and a very good public speaker might not be enough - summarized Szułdrzyński.