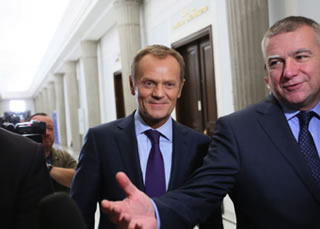 It was at the turn of 1980s and 1990s, when the Federal Intelligence of Germany (BND) through Christian Democratic Union of Germany (CDU) financed the development of several political parties in Poland. Some of those parties have since disappeared from the political scene, remembered only by historians. However, members of such parties have remained active in the politics, in particular members of one such party that effectively represented German interests in Poland.

This party was the Libral-Democratic Congress (KLD), established in early 1990s by the Gdańsk based Solidarity leaders, which included Donald Tusk and Jacek Merkel. They were supported by Polish economists Krzysztof Bielecki and Janusz Lewandowski, as well as several important communist SB officers, one of them being Michał Boni. Today, they represent Poland in a "dignified" manner in the European Union, asking for sanctions to be imposed on their own country. Although the KDL party disappeared as quickly as it appeared, by merging with the Democratic Union and Balcerowicz's Union of Freedom, its main representatives Bielecki and Lewandowski managed to sink Polish economy and sell off most state assets.

The process was easy: first to bring a state-owned company towards a financial ruin through bad administrative decisions, then sell it cheaply to a selected buyer. The birth of KLD remains mysterious to this day. Its members are not keen to talk about Wiktor Kubiak, a deceased now Polish-Swedish businessman, who was a secret agent for the Internal Military Service in 1980s, a collaborator with Pruszkow gangsters, and manager of several singers, including Edyta Górniak.

It was in Kubiak's apartment at Marriott Hotel in Warsaw, where KLD members met to discuss their politics while drinking Scottish whisky and smoking Cuban cigars. It was in that apartment, where the CDU representatives delivered, as previously revealed by Paweł Piskorski, German currency necessary for KLD to develop their political activity.

In those days, the crucial person for the party was not yet on the scene, and his true role has never been precisely known. This person was to become a spokesman for the coalition government of Civic Platform and Polish People’s Party, as well as Minister-Coordinator of intelligence services in the Tusk government. That person was Paweł Graś, who became involved in opposition activities at the time he studied law and journalism at the Jagiellonian University. Still a student, he became a director in a Polish-German company, ABW Pro-Holding GmbH. The company belonged to Paul Rogler, whom Graś met in Western Germany in 1989. Rogler worked his way to the top from humble beginnings. Up to 1987 he owned a small copying services company in Bavarian Selb, which bordered Czech Republic, NRD and NRF.

Shortly thereafter, he turned up in Poland as an owner of a dynamic IT company Rotronik EDV- -Entwicklungen in order to set up its branch in Poland: Pro-Holding.

Rogler and Graś were involved in many deals together, but unsuccessfully. Rogler's companies lost money, so it would seem logical for the German businessman to withdraw from such market. But he didn't, he continued to sell the losing companies, and invest in new ones, which again lost money and was sold. Graś became discouraged by business, but still was willing to deepen his acquaintance with the German businessman.

Graś knew Krakow's political elites from his times in the Independent Student Union (NZS). So, he used his contacts to embark on a career in politics. He was a member of Realistic Politics Union, Movement of a Hundred and Solidarity Elective Action, which put him on a path to the Parliament. He continued his career in Conservative People's Party, and then in the Civic Platform formed with inspiration of General Gromosław Czempiński. In his political activity, Graś was primarily interested in intelligence services and national security matters.

He attended security and defense training in the U.S., Canada and Germany and served as security advisor to Prime Minister Jerzy Buzek, was a member of the National Defense Commission and the Specialized Commission for government project on ABW and AW (Internal Agencies). He also chaired a sub-commission for foreign and NATO co-operation, commission for special services, and he became the government's security commissioner, as well as an informal coordinator for security services in the rank of Secretary of State. He was later dismissed from that position and offered a position of government's spokesman.

Observers, who thought he was moved because Prime Minister Tusk didn't trust him, were wrong. It was quite the opposite. Donald Tusk wanted to protect Graś and himself, so he decided to play it safe. Tusk, a skillful diplomat, knew that with his links to the German businessman, Graś could have harmed the government, so he took a preemptive step and moved him. His advisors convinced Tusk to move Graś to a less important position, while keeping him in the government. This was how Tusk avoided being accused of putting Graś - a person with unexplained business and social ties to a potential BND agents - in charge of all possible Polish intelligence services. In those days it was already obvious that Rogler was mentioned in the activity of ABW as having links to German intelligence. However, the matter was never pursued because of Graś. Why was that?

We need to delve into the past to answer this question.

Paweł Graś served Chairman of the Independent Student Union (NZS) at the Jagiellonian University. The NZS generated a new wave of people connected with the Office for State Protection (UOP), which was full of old security services officers, but at the same time managed to attract young people from NZS. The group’s leaders were Maciej Hunia, a graduate of intelligence school in Stare Kiejkuty; Grzegorz Reszka and Paweł Białek, who later became Krzysztofa Bondaryk’s Internal Security Agency (ABW) head, deputy; and Janusz Nosek. Former student oppositionists were led by two individuals, Tadeusz Rusak, a good friend of Bronisław Komorowski, who later became a head of the Military Information Services (WSI) and who eagerly “cleaned up” and shot down the investigation of Central Investigative Bureau (CBŚ) into Pro Civili Foundation. The other leader was a head of Kraków’s bureau, Mieczysław Tarnowski, who was Rusak’s deputy. The UOP in Kraków was directed by the headquarters in Warsaw led by individuals with vast powers such as Konstanty Miodowicz, Bartłomiej Sienkiewicz and Wojciech Brochwicz. It was a safe situation for Graś, who relied on his former college friends who would not mind his contacts with the German businessman suspected of links with BND.

Once Gras gained influence over Donald Tusk, he repaid his friends’ loyalty by making it easy for them to access the highest positions. The outcome was that the counterintelligence in Kraków noticed Rogler’s activity but took half-hearted actions, which brought no results. However, it did turn out later that Rogler hit the counterintelligence radar in 1990s, or even earlier. Rogler’s contacts with the German Consulate in Kraków attracted their attention. The counterintelligence units obtained information that Paul Rogler, a business associate of Graś, contacted a German national, who was in Poland regarding Ryszard Tomaszek and his confirmed espionage. Tomaszek built German espionage network in Poland. That fact intrigued the counterintelligence services, in particular because Rogler’s links with BND were already known and a consistent picture was emerging. The dots had to be connected. The problem was that there was no one willing to add the facts together. The Krakow group safely survived all upheavals without major problems, maybe with a brief exception for the years 2005-2007 when PIS came to power.

At that brief time, Graś was no longer protected and the investigation began. The counterintelligence officers quickly obtained a lot of data regarding links between Graś and Rogler suspected of working for BND. It was doubted that Rogler’s activity in Poland was altruistic. Information about the beginnings of their relationship back in 1980s was of special concern. The case developed dynamically, but was stopped abruptly once the Civic Platform returned to power in 2007.

In autumn 2007, Krzysztof Bondaryk, whose candidacy was put forward by Wojciech Brochwicz, Konstanty Miodowicz and Bartłomiej Sienkiewicz, became the head of ABW, whereas Graś became a trusted advisor and a closest associate of Prime Minister Donald Tusk. Once promoted, Graś made sure that the highest positions in the intelligence services were taken over by his friends from university times. Maciej Hunia became the head of Military Intelligence Service, then Intelligence Agency. Janusz Nosek became the head of Military Counterintelligence Service. In the end, the case of links between Graś and a German businessman with links to BND was dropped. The last hope that the case would be re-opened was Ryszard Tomaszek, who, after serving prison sentence, moved to Germany and then came back to Poland. Unfortunately, Germans forbade him to say anything, but gave him a pension for life from the German government in

exchange for his service to BND.

On my way home I was thinking about our current political situation. One crime of the people in high positions covered up their previous crimes. Finally the people in high positions were able to cover up so many of their crimes, that ultimately all of them blended into one and are practically impossible to untangle today, not to mention to be accountable for them. This makes me understand why so many individuals disappeared in mysterious circumstances in Poland within the last several dozen years, and yet no one was ever found guilty of any of the spectacular murders, or fake suicides.

Now I understand why cases such as sudden death of Andrzej Lepper could not be explained to the public, why people like Tylicki, Gruszka and many others were destroyed, but nothing was ever explained. I also know why Małgorzata Wierchowicz from Police Headquarters, who tried, against all odds, to investigate the murder of General Marek Papała had no chance from the start. There are nearly seven thousands files codenamed “Hiacynt,” collected continuously materials from illegal wiretaps and secret searches, countless discrediting files on everyone, information on pressures and blackmails. We have to put an end to all this madness and start again from scratch, but two important questions remain: who is brave enough to do all this, and whether they will be allowed?