RUSSIA IN - AMERICA OUT - GERMANY UP 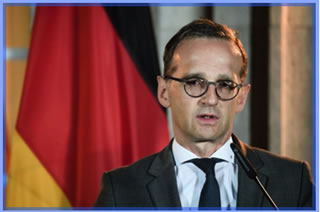 The head of German diplomacy Heiko Maas developed the vision of a new European Union: United and Sovereign Union - the Union without nation states - the German union.

Heiko Maas recently met with Polish Minister of Foreign Affairs Jacek Czaputowicz. The two gentlemen talked, exchanged some nice words, posed for nice photos, and at the end Mr. Maas came home and wrote an article about the New World Order. The article is hundredfold more important than the entire visit to our country. The piece that Maas published concerns the German vision of Europe - the vision that could have disastrous consequences for Poland.

Hastings Lionel, former NATO's first secretary general, once said that the NATO alliance was established to make "Europe safe from Soviet, keep Americans in the middle, and keep Germans under control" (keeping Russians out, the Americans in and the Germans down). It can be presumed that the Germans never really enjoyed this last part.

Maas in his article published in the journal "Handelsblatt" admits that a decade-long alliance between Germany and the US, despite the prosperity period, has ended. The roads of Europe and the US have begun to part. The head of German diplomacy says bluntly: the former world shaped by East-West conflict has already passed, and the conflict itself cannot be used as a binder of the of Euro-Atlantic Alliance anymore. Reading between the lines – the East is no longer a threat.

What remains to be done? The head of German diplomacy says candidly: a new sovereign Europe must be built. "Only by acting together with France and the other peoples of Europe we will be able to achieve a balance in relations with the USA," he argues. The European Union in his vision is to evolve from a loose community based on free trade and free movement of people into the "cornerstone" on which the entire international system is to be based. The European Union is to become a full-fledged power player.

In other words, the European Union is to become a state. Yet in other words (this is just an interpretation) the European Union is to be relegated to the role of a tool for the implementation of German interests. This is a dream of liberals since in such a united Europe the nation states "are to disappear," hence the interests of these individual states will vanish together with them. This concept was always naïve, but in recent years has gained even more embarrassing posture.

The future "united Europe" in the idea of Maas means that the European Union "makes sovereign decisions in areas where it is more efficient than the lonely national states." What does this mean? Everything. Please point out the area where any state or the community would be able to muster more resources and energy than all the Member States combined. The Union therefore will simply take over the basic functions of the nation states and arbitrarily decide which prerogatives to pass to local politicians chosen by natives of the particular post-state lands.

Another worrying aspect of this vision pertains to the field of security. Maas argues that Europe can no longer rely on the USA, on which it has been dependent for decades. In his opinion, the European community must strengthen the European forces within NATO. Of course, there is no announcement of the establishment of an EU army yet, but the message is unambiguous. The EU of "security" is to act within the framework of the Euro-Atlantic Alliance for the time being, but over time it should transform itself into an independent (!) project.

So where is the opportunity for US - European cooperation? Well, it doesn't look impressive. Maas points to humanitarian aid for countries in the Middle East or Africa. When Americans want to cross this line, Europe needs to react. Let’s spell this out: according to this German politician, it is Europe that supposed to tell America how far it can go and how far it can intervene. According to Maas "keeping Germans down" apparently is already passe.

In addition, in order to prevent the USA from "acting over our heads," the top German diplomat states that it is necessary to strengthen European autonomy by establishing non-US payment channels, the establishment of European Monetary Fund and independent SWIFT payment system. In other words, he calls for the establishment of more transnational entities, more entities above the national authorities.

To date, France has been the driving force behind the idea of a united federal Europe, which, by obtaining quasi-state status, would be a competition for the United States. Historically Berlin was seen as a brake factor for this concept. Apparently these times belong to the past.
From the vision of Maas one can read the vision of Europe, which will interfere much more in the affairs of nation states; It will be the controlling Europe. The European Union that has been silently liquidating the nation states (let’s call facts as they are) and at the same time developing a sharp conflict with the US is the worst possible scenario for Poland.

Germans obviously see a place for Poland in New Europe. This is the place for a junior partner, to which the previous Polish government aspired. The issue of automatic consent to receive immigrants is probably the best example of this phenomenon. It is a place for a partner who will not be able to conduct its own policies, or influence the direction of development for Europe. A partner who will only implement the precepts of more enlightened Europeans, a partner who, as Prof. Legutko puts it, will modernize itself by photocopiers. To put it simply, Poland is to supply the West with healthy food, cheap labor, and shall buy goods and technologies from more developed areas of the European community, i.e. Germany.

Poland in a split

It is no secret that in the world of conflict between the powers, the Government of Poland hopes for the support of Washington. It can be even said that it aligns itself with the US without any alternatives. At the same time, however, the leadership of PiS considers the Polish membership in the European Union as important. The problem is that by the decisive actions of the government and the radical behavior of the opposition, our country has limited influence on the European policy. At the same time, it must be acknowledged that the recent conflict with Israel showed how little the friendship with the "biggest ally" is worth.

It seems that the Polish government has been trying to drive simultaneously on two horses and it does not feel confident about either of them. These horses slowly began to part and if we do not decide on one, we may fall from both at once. The time is running out, we have to decide.