Tusk was able to write off 1.2 billion of Gazprom debt once President Kaczyński was eliminated in the Smolensk crash. 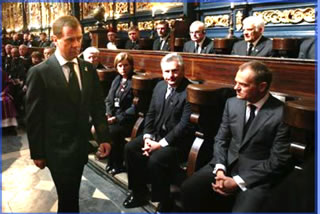 President Lech Kaczyński opposed writing off the Gazprom's debt of 1.2 billion PLN, owed by the Russian concern to a Polish company controlled by the Polish Treasury. But Polish Prime Minister Donald Tusk was in favor of writing off this debt. President Kaczyński warned that he would appoint an investigative committee should the government have decided to wipe out Gazprom's debt. Soon thereafter, President Kaczynski was killed in the Smolensk crash, while Tusk continues to thrive as Prime Minister of Poland and later as the President of the European Council.

In the autumn of 2009, a Court of Arbitration in Moscow ruled that Gazprom owed 1.2 billion Polish zloty to EuRoPol Gaz, a company partially owned and managed by the Polish government. These damages were awarded to the Polish company due to Gazprom's failure to pay the fees for gas transfer to the West via Poland since 2006.

Why such a decision? In 2006, the Gazprom suddenly announced that the fees for the transfer of the Russian gas via Poland to the West were too high. The Russians questioned Polish regulations, which required the transfer fees to include a small charge dependent on the value of the transferring company’s assets. The growth of Gazprom's assets meant that the company had to pay higher fees for the gas transfer via Poland. Leszek Szymowski, the author of 2011 article on this subject, suggested that the sudden change of the Gazprom position could have been related to the shutdown by the first PiS government of the Military Information Services (WSI), which served as “Russian unofficial intelligence service in Poland." Obviously, the Court of Arbitration had no legal basis to rule against Poland in such circumstances.

At the end of October 2009, the Polish government began negotiating with Russia terms of a new gas contract to supply gas to Poland for years to come. But Gazprom would sign such contract on the condition that its debt of 1.2 billion PLN be written off. The Polish Prime Minister Tusk and Minister of Treasury, Aleksander Grad, agreed. However, the President of the Polish company EuRoPol Gaz S.A., Michał Kwiatkowski, said that for as long as he was in charge, the company would not write off the Gazprom debt. He was supported by one of the company's board members, Jerzy Tabaka. Kwiatkowski even wrote a letter to Minister Grad, saying that writing off this debt would be against the Polish law, but received no response. On December 11, 2009, Aleksander Szczygło, the Chairman of National Security Bureau at the time also opposed signing the contract on Gazprom’s terms. He was later killed in Smolensk. Several days after the NSB statement, the Office of President Lech Kaczynski also issued a stated that the President is against the new gas contract with Russia.

A sudden change of direction took place on January 20, 2010, after the board meeting at EuRoPol Gaz. The meeting concluded with suspension of the two main opponents of the gas deal with Gazprom, President Michał Kwiatkowski and board member Jerzy Tabaka. President’s duties were taken over by Alexander Medvedev, Deputy Chairman of Gazprom and Chairman of Gazprom-Export. The conflict of interest seemed obvious, and the President Kaczyński’s Office warned that should the debt be written off, the Prosecution would be alerted and an appeal to the Sejm would be made for an investigation. Therefore, the President and his Office became the primary obstacle on Gazprom's path to the debt annulment.

On January 25, 2010, Prime Minister Tusk's office publically announced that, as a representative of the Treasury, which co-owned the EuRoPol Gaz, it agreed to write off Gazprom's debt of 1.2 billion PLN. This information was confirmed on January 27 in a joint announcement by Gazprom, Polish PGM and EuRoPol Gaz, even though the EuRoPol's charter required the entire management board to agree to the debt's annulment, and not just the President, the position filled by Alexander Medvedev several days earlier. The remaining EuRoPol management board members agreed with suspended Michał Kwiatkowski and opposed the decision. To resolve the probme the EuRoPol board of directors at its March 16, 2010 meeting adopted significant changes to the company’s charter. One of the changes made provided that all matters, including debt annulment, should be decided by EuRoPol’s management board unanimously. In case of disagreement, the final decision would be made by the board of directors. Should the board of directors be unable to resolve the matter, a general meeting of shareholders would need to be called. The main shareholders were Russian Gazprom and Polish PGNiG, a company controlled by the Polish Treasury. Both these companies, equally owning the EuRoPol Gaz, would need to appoint an equal number of members of the Management Board. A week later, the annual general meeting of EuRoPol’s shareholders took place to approve the changes. However, because the agreement regarding gas supply and regulations of EuRoPol’s activity was not signed by the Polish and Russian governments, the session of the annual general meeting was postponed until April 20. It is important to emphasize that during that time President Lech Kaczyński’s advisors suggested in the media that the President would appeal for an investigation if the government was to write off Gazprom’s 1.2 billion PLN debt.

On April 10, 2010 President Lech Kaczyński boarded a governmental airplane Tu154M to Smolensk. He and other key opponents of the gas contract with Russia were killed at 8.41am that day in Smolensk, Russia. On April 18 a funeral of the presidential couple took place at Wawel in Kraków. The funeral was attended by the Russian President, Dmitry Medvedev, as well as Deputy Chairman of Gazprom, Alexey Miller and Chairman of EuRoPol Gas Alexander Medvedev. Two days later another general meeting of EuRoPol’s shareholders took place, and a new president Mirosław Dobrut was elected while Michał Kwiatkowski and Jerzy Tabaka were officially dismissed. On April 21, 2010 Donald Tusk’s government announced that the new gas contract with Russia, which included the writing off the 1.2 billion PLN of Russian debt to Poland, would be signed at the beginning of May. This, however, did not happen, due to Brussels interention, which pressed the Tusk government to re-negotiate the gas contract with the involvement of the EU representative. The contract was finally signed on October 29, 2010, and its content has never been publicized. The only known fact was that Gazprom would supply gas to Poland until 2037. However, the supply end date was shortened thanks to the European Union’s intervention. It is also known that Poland was not paid the outstanding 1.2 billion PLN.

One may wonder - had President Kaczyński not died in Smolensk, would he proceed to report a potential crime against the Polish Treasury to the Prosecution? Would he appeal to the Sejm for investigation whether it was legal for the Tusk government to write off 1.2 billion PLN of Russian debt to Poland?