Is the West going to give in to Putin? Some EU countries support lifting sanctions on Russia 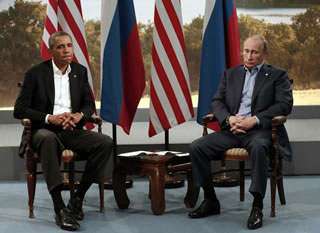 ”EU is divided with regards to sanctions on Russia, with some members willing to have them softened,” informed Rafał Trzaskowski, Poland’s Secretary for European Affairs, after a meeting of 28 EU member states in Brussels.

“Some of the EU members would already want the sanctions to be softened, as a gesture of good will towards relations with Russia. Poland is totally against it,” Mr. Trzaskowski told Polish journalists in Brussels.

The debate regarding sanctions on Russia is first on the agenda for this year’s EU Summit in Brussels, starting on March 19. Poland is in favour of sanctions regime to be continued until the Minsk agreement from mid-February is fully implemented.

In practice it would mean that sanctions will not be lifted until the end of 2015, since by then Ukraine is expected to regain its territorial integrity and take control over the Russia-Ukraine border, in agreement with one of the Minsk negotiations outcomes.

“Our stance is that until the Minsk agreement is fully implemented, we are not prepared to discuss any significant changes to the existing sanctions regime. However, the opinions are divided among other EU member states,” said Mr. Trzaskowski.

Mr. Trzaskowski says that the EU Summit will show if the members stay united with regards to the sanctions regime on Russia. “So far, there has been consistency in EU decisions regarding sanctions. The summit will test and verify if this consistency is going to be continued,” stated Mr. Trzaskowski.

Grzegorz Schetyna, Poland’s Minister of Foreign Affairs said that it was not certain whether the outcome of the EU Summit would be to continue the economic sanctions on Russia, which are due to expire by the end of July. If the decision was in favour of lifting them, it could still be overturned during next summit in June.

Mr. Trzaskowski reckons that neither June nor September will bring any changes to the situation in eastern Ukraine and the Minsk agreement will be verified at the end of the year, when Ukraine is supposed to take control over the Russia-Ukraine border.

The Minsk II agreement, signed in mid-February by Germany, France, Russia and Ukraine aimed at enforcing a ceasefire, withdrawal of heavy weapons and elections in Donbass to be carried out by the end of 2015, followed by the closure of Russia-Ukraine border, at present out of Kiev’s control in sections within Donetsk and Luhansk Oblasts, which are controlled by separatists.