What’s Hiding in Foreign Bank Accounts, Or How You “Distribute” A Million Dollars

Some of the money appearing on Lejb Fogelman’s Swiss bank account statement came—according to Katowice detectives—from bribes paid by the SairGroup consortium for the privatization of PLL LOT, the Polish Airline. The attorney was interrogated in the capacity of a witness—reports Gazeta Polska.

Am Schragen Weg number 14. Vaduz. Liechtenstein. It was at this address, in the offices of Swiss lawyer Norbert Seeger that the Draco Corporation came into existence on July 3rd 1995. Since then, the company has come to play an immensely significant role in the history of Polish privatization. It was through Draco Corporation-owned bank accounts that funds acquired from bribes, fictitious consulting agreements, and tax evasion schemes were supposed to flow. After nearly nine years spent auditing irregularities in the largest Polish privatizations, investigators from the Katowice Appellate Prosecutor’s Office discovered a paper trail leading to the Draco Corporation. They suspect that the million dollars that was wired to Draco Corporation bank accounts comprise a bribe for the privatization of PLL LOT. A portion of these funds were later transferred to the private accounts of, among others, the 66 year old Lejb Fogelman, one of the most influential attorneys in Poland, who for years had been involved in privatization hearings. He was subsequently interrogated, not as a suspect, but as a witness.

What is the missing link among Fogelman, the Katowice investigators, and the Draco Corporation? 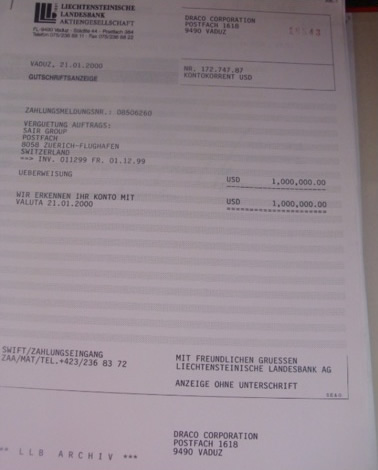 The privatization of PLL LOT took place on November 18, 1999, when Emil Wąsacz, the Minister of the Treasury in the government of Jerzy Buzek, decided to enter into an agreement to sell 25% of the shares of the Polish national airline to the Swiss holding company SairGroup. The state enterprise was advised about this 136 million PLN transaction by a consortium of Dresden Kleinwort Benson and Business Management & Finance (BMF).

During their audit of the transaction, investigators from Katowice focused primarily on this latter subject. Not without reason: established in 1991, BMF conducted business with the Draco Corporation even before settling the sale of 25% of PLL LOT’s shares. This company (BMF), which is owned and presided over by Wojciech J., later the Deputy Minister of Infrastructure in Leszek Miller’s cabinet, had drawn up reports on the aviation market for the Draco Corporation, collecting over one hundred thousand dollars for this market research. According to the investigators, these market research studies were never actually carried out, and the contracts purportedly affixed to them were fictitious. In fact, the money that the Draco Corporation paid to BMF later made its way to Wojciech J.’s Barclays Bank account in St. Peter Port on the Isle of Guernsey. It was in this manner that the Polish Treasury was systematically cheated.

How to Partition a Million Dollars

A little more than two months after the sale of 25% of PLL LOT’s shares (January 21, 2000), one million dollars was transferred out of national airline investment firm SairGroup and into the Draco Corporation’s bank account. According to the Katowice investigators this was a bribe paid in exchange for help received in completing the transaction. Who was the beneficiary of the money? The answer to this question is hidden in a withdrawal from the USD bank account of the Lichtenstein-based Draco Corporation, which was practically empty before the transfer from Switzerland, which deposited one million dollars into it. A portion of this money was allocated to companies associated with Andrzej Piechocki (Zurawia Estate, Invest Logistics). Moreover, Piechocki is the former advisor of Wiesław Kaczmarek, one-time Minister of Privatization, and later Minister of the Treasury, who was accused of money laundering and corruption during investigative audits of irregularities in the privatization process. One might recall that Wojciech J. was likewise a suspect during the privatization audits, and that he, too, received a portion of the funds transferred by SairGroup. Another recipient of these funds was the Hong Kong-registered Prime King International company. Finally, portions of the million dollar bribe were transferred to bank account number ZH161511C in BNP Paribas in Switzerland. This account belonged to Colonel Jan Sz., military intelligence officer in the PRL and officer of the Military Information Services (WSI) from 1994 to 2003 responsible for the privatization of Polish state-owned enterprises in the Ministry of Privatization and in the Ministry of the Treasury. He sat on the supervisory council of PLL LOT, among other enterprises. The prosecution wanted to formally carry out allegations of corruption against Colonel Sz., but this was impossible: the colonel died in 2003.

Transfer to UBS in Zurich

Nevertheless, the largest amount of money went to Lejb Fogelman. As much as $380,000 made it to his UBS account number P0152450 in Zurich. 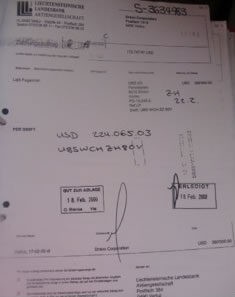 Did this transfer have anything to do with the privatization of PLL LOT in 1999? In an interview with Gazeta Polska, Fogelman insists that this is not the case, saying that he “had absolutely nothing to do with this transaction.” Furthermore, he emphasizes the fact that he has already been interrogated twice by the Katowice prosecution in this matter, both times in the capacity of a witness: “I cannot say anything about this subject, I am sworn to secrecy with regard to the testimonies I submitted. Moreover, this has to do with personal matters.” When asked about the Draco Corporation, he responds: “I don’t know this company, I have never has anything to do with it.”

How, then, did a transfer appear on his bank account originating precisely from the Draco Corporation? From unofficial information, it appears that Fogelman explained to investigators that this transfer was payment for a debt incurred by an individual in some way linked to the Draco Corporation. In the Gazeta Polska interview, Fogelman adds: “I will neither confirm nor deny anything. I just don’t want to talk about it. I have done nothing illegal or contrary to legal ethics.” The Katowice prosecution likewise refuses to reveal any details about the matter.

Fogelman is one of the most influential people in Poland, involved in numerous privatization processes. He studied at Warsaw University, but in 1968, as a result of a widespread anti-semitic smear campaign, he emigrated from the country. He went to the United States and didn’t return to Poland until after the political-constitutional transformation that saw the fall of socialism. Almost immediately, he began advising business and government leaders on major transactions, including the merger of Unicredit and BPH, the purchase of Lockheed Martin F16s, and the privatization of Polkomtel. His group of friends included many leading Polish politicians in charge of state assets, such as Marek Belka, Wiesław Kaczmarek, and Alicja Kornaszewicz.

There are still many mysterious knots surrounding the 1999 privatization of LOT Polish Airlines. The Katowice prosecutor’s office is investigating the part played by a well-known lawyer, known as K., whose offices have provided services to state-owned enterprises for years. His sister was the wife of Colonel Sz., while K. himself belonged to the inner circle of confidants of the deceased military intelligence officer. In short, K. was Colonel Sz.’s closest advisor. As a result, he not only knows the inside story of many transactions, but also help to secure the colonel’s archives after his death. An inside source privy to the investigative materials reports that there is reason to believe that these archives contain evidence incriminating this entire network of corrupt officials and businessmen during the era of privatization, and moreover that they contain information about foreign contacts who took or paid bribes.

The Katowice Prosecutor’s Office, on the other hand, did not wish to reveal any details when asked about the involvement of Attorney K., “for the good of the investigation.”

When Will We See an Indictment?

The investigation into irregularities in Polish privatization, begun in 2006 by the Katowice Appellate Prosecutor’s Office, is expected to be concluded within a few months. “We foresee it’s conclusion during the first half of 2015, however a precise date is contingent on a number of ancillary activities, among them the cooperation of the international legal system,” admits Leszek Goławski, a spokesman for the Katowice Prosecutor’s Office. Thus far, 608 volumes of records have been collected in the context of the investigative proceedings, among which four volumes are classified. Investigators took note of definitive corruption taking place in three privatizations: STOEN, Telekomunikacja Polska, and PLL LOT. A total of eight people heard charges of corruption and money laundering, among them Andrzej Piechocki, Wojciech J., General Gromosław Czempiński, former head of the UOP, and Michał Tomczak, a Warsaw lawyer.