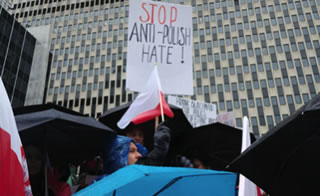 As the term “Nazis” effectively replaced “Germans” in the Holocaust research and education, new perpetrators of the Holocaust have emerged. In today’s public perception Germans are no longer responsible for the Final Solution. The Nazis are! How the European Jews were murdered in WWII? Mainly in gas chambers of Auschwitz - the Polish Concentration Camp, the common wisdom goes.

Hence, the Nazis murdered the Jews in the Polish concentration camps, according to the latest Holocaust narrative. At the same time, the current government of Poland has been repeatedly portrayed in the West as fascist, racist and anti-Semitic. Therefore, these unspecified Nazis today are being perceived by the public simply as Poles.

This is how the Poles suddenly become responsible for the Holocaust of the Jews. Never mind that Auschwitz was built and operated by the Germans on the conquered Polish territory that was outright incorporated to the Third Reich. Never mind that the camp was created with express intent to exterminate the Polish resistance to German occupation. Never mind that in the years 1939 - 1941 Auschwitz served as German killing machine to murder Polish resistance fighters and civilians caught in street round-ups across occupied Poland. Never mind that Poland was subjected to the most brutal occupation by both Germany and the Soviet Union. Never mind that the number of Polish citizens of Jews ethnicity murdered is approximately the same as the number of Polish citizens of Polish ethnicity murdered in WWII. Never mind The Hague Convention (IV) of October 18, 1907 on the Laws and Customs of War on Land that provides: “The authority of the legitimate power having in fact passed into the hands of the occupant, the latter shall take all the measures in his power to restore, and ensure, as far as possible, public order and safety.” The persistent process of switching the blame for the Holocaust from Germans to Poles has been effectively pursued for decades in accordance with the German historical policy and with the support of well-funded Holocaust activists. Today this long-term strategy reached its intended purpose.

At the beginning of the second millennium the Polish government noticed the process of fabricating facts, manipulating sources, marginalizing the Polish suffering, and redefining the Polish experience in WWII in order to construe and develop anti-Polish narrative in the Holocaust research and education. So, in October 2006, the Polish Parliament introduced a special provision into the Polish law that stated: Who publicaly accuses the Polish Nation of the participation, organization or responsibility for crimes committed by Nazi Germany is subject to criminal penalty.

By 2018 however, the international public opinion has turned against Poland on the issue of Holocaust so dramatically, that the global condemnation and hysterical outcry precluded any public debate on the merits of this legislation. The already adopted provision was revoked within weeks under tremendous pressure from the Jewish community and their global network of Holocaust notables. The global media proclaimed uniformly that Poland intends to distort the history of the Holocaust and the current fascist government of Poland wants to white wash the Polish crimes.

Today the Justice Minister of Poland asks the poignant question: How is it possible that within the time-frame of 10-12 years, such drastic changes have taken place in public perception of the history of WWII? What happened that the law so obvious and uncontroversial in 2006 became offensive and absolutely impossible to accept in 2018? What’s even more disturbing is that such radical changes in perception have taken place above all among the leaders that influence the Western public opinion and shape historical memory of WWII.

Indeed, the reaction to the 2018 amendment of the law intended to protect good name of Poland was beyond any accepted standards of civilized discourse. It was simply speaking barbaric. The Israeli leaders proclaimed to the whole world that the Poles suck antisemitism with mother’s milk, Prime Minister of Israel openly accused Poland of co-responsibility for the Holocaust, many papers in Europe wrote about “Polish Concentration Camps,” a prominent American journalist of Jewish origin stated on the international broadcast that the Jews in the Warsaw Ghetto “rose up against the Polish Nazi Regime,” and the US Secretary of State during his visit to Warsaw glorified Frank Blajchman, a butcher of the Polish anti-communist resistance.

This barrage of most offensive nonsense by Western leaders was preceded by a series of most preposterous proclamations and publications of the Holocaust activists, including such anti-Polish bigots like Jan Gross, Jan Grabowski or Barbara Engelking. Jan Gross built his career on manipulating the history of the murder of Jews in Jedwabne in order to switch the blame from Germans to Poles. Jan Grabowski is famous for intentionally misconstruing the research of Szymon Datner in order to accuse the Poles for the death of 200,000 Jews. Also, Barbara Engelking distinguished herself with the outright racist proclamation on TV that the death of a Jew is a transcendental event while the death of a Poles is death like death.

Engleking is also the co-author of a book entitled “Night Without an End. Fate of Jews in Selected Counties of Occupied Poland.” According to Dr. Gontarczyk, the level of manipulation in this book reaches atomic dimensions. Hundreds or even thousands of Jewish victims were portrayed as victims murdered by the Poles, whereas the Poles had nothing to do with their deaths. The authors, Engleking and Grabowski, put together a mystified image of Poles in order to transfer the pattern of behavior they built based on their “research” in selected places into the history of the entire war and Polish-Jewish relations. According to Gontarczyk, they developed a multi-story and multi-layered pseudoscientific hoax. There is no doubt that it has been a carefully planned operation. All the hoaxes are designed in such a way as to attribute to the Poles as many crimes committed by the Germans and the Jewish police as possible.

Many others, well paid by the German foundations and Holocaust institutions, are making academic careers by fabricating and misinterpreting facts as well as destroying and manipulating sources in order to piece together the image of Poland as the perpetrator of the Holocaust.

Yet, this extraordinary amount of unethical practices, gross lies, bigotry and outright racism is not even worth noticing by Western luminaries in politics, academia and the media. These post-truth zealots consumed by “Europeization” of Poland at all cost need to portray Poland as Nazi, Fascist and anti-Semitic in order to destroy the Polish state and the Polish nation. The Holocaust ideologues are with them on this ride, hoping for the big reward in accordance with the recently adopted US Public Law 115-171 on Holocaust era restitution claims. They demand billions of dollars from Poland in order to spread more hateful anti-Polish Holocaust indoctrination, assure exclusivity of Jewish experience, solidify the supremacy of Jewish suffering, and fill their coffers in the process.